TORONTO -- Some flew halfway around the world to reunite with family and friends but have ended up alone. Others arrived only to have travel plans change. Expatriates worried about when they would be able to return to Canada. And here at home, anxiety over loved ones in China.

For hundreds of millions of Chinese -- and those with family members in Canada and elsewhere around the world -- China’s most important holiday is different this year.

Minjie Wu lives in Toronto, but her father, a Canadian resident, is in self-isolation more than 11,000 km away in Wuhan, the epicentre of a new coronavirus outbreak that has infected thousands worldwide and killed hundreds. The distance has left her feeling helpless and concerned.

“I do worry, especially because I’m too far away. I want to help, but there’s not much I can do,” said Wu in an interview. She finds some comfort in the sense of community she sees on social media as people try to stay positive and help one another.

Wu’s father flew back to China by himself a month ago to visit family and friends, but is now spending the holidays home alone. Wu and her mother try to keep him company through WeChat a couple of times a day. He is not supposed to return until April, so they tried to get him on the evacuation list for Canadians in the region, but as a resident and not a citizen, he did not qualify.

Wu and her husband James Collins had already purchased tickets to visit Wuhan later in the spring along with their infant daughter, but are now considering cancelling those plans.

“My family, relatives, they all basically cancelled all their activities. Everyone’s just staying home,” Wu said. There’s no physical interaction, she said, so on Chinese New Year’s Eve, everyone celebrated in a group chat and transferred traditional “red envelopes” through WeChat.

For many Chinese families, Lunar New Year is normally a time when long-held traditions are rekindled during large gatherings, and a stream of visits to and from grandparents, aunts, uncles, cousins, and old friends are made. The days and weeks surrounding Spring Festival, as it is known in China, has been called the world’s biggest annual human migration, with some three billion trips taken during that period. It is often the only time of year many can see family.

Katherine Li, a student at the University of Toronto, says her hometown is next to Hubei, the hardest hit region in China. She has been following the news and worrying about her friends and family back home.

“But there’s nothing I could really do,” she said. This Chinese New Year’s Eve, Li found she had no heart for the festivities.

Like many other students with family in China, Li is unable to see hers during the holiday, because school is in session. Her own family celebrated quietly this year and brought her grandparents home to stay so they could more easily care for them if necessary.

“All my friends here, we just keep messaging our parents, our families, (telling them) don’t gather, wear your mask, be careful, and ask if everything’s okay,” Li said.

Canada may only have three cases so far, but the quiet impact of the virus has nonetheless been felt in large and small ways, especially within the Chinese community.

Parents shared stories of how their children faced discrimination from their peers in school. Businesses have asked some employees to stay home. A Chinese jewelry store decided to close until February 9. One family pulled their child out of a piano recital because they had recently hosted visitors from China.

Rumours and videos being shared on Chinese social media platforms have stoked fear, tension, and even anger in parts of the community as well, with some families wanting more drastic local measures than what officials are recommending. Travellers returning from China are being singled out by their own community. Many are self-quarantining “just in case.”

Yet in spite of these uncertainties and worries, many in the community are also coming together on social media, discussing and organizing ways they can help family, friends, strangers on the other side of the world. A number of WeChat groups have organized donation drives to gather supplies to send to China amid pleas to the public from hospitals in Wuhan for more masks, protective gear, and other medical supplies.

In pharmacies and other stores across the GTA, shoppers have reported products being sold out. Several signs at a Toronto-area Walmart over the weekend told shoppers that masks, hand sanitizers, rubbing alcohol, hydrogen peroxide, were all sold out.

“We have been trying to get masks and stuff to send back,” said Wu’s husband, James. “But I feel like a lot of people are doing the exact same thing. I work in Burlington, and Burlington is sold out. And they’re saying people are coming from Toronto to grab masks to send back.”

The coronavirus has some 50 million people across multiple cities in China on official lockdown, with many others in self-imposed quarantine, leaving Canadians expats, relatives, friends, visitors and tourists trapped. From Wuhan to Beijing to Shanghai, many individuals are also self-isolating, venturing out only for essentials, according to a number of Canadians in China who spoke with CTV News over WeChat messaging. 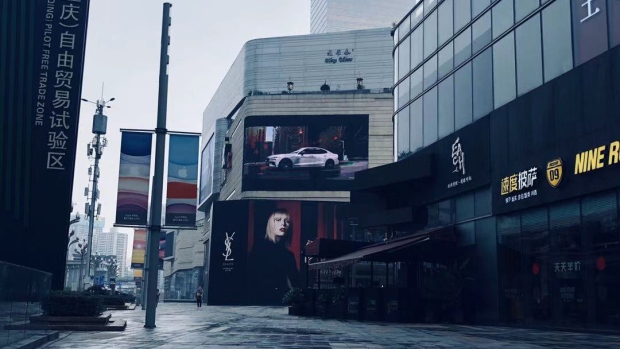 “We are very nervous and we are mostly not going outside,” said Kai Wood, an international foreign language high school teacher and editor based in Chongqing. Chongqing is a large municipality of more than 30 million people next door to Hubei province.

“When we go out I have a strict regimen. Gloves, two masks, goggles, and wash up well when I get back,” said Wood, who has been mostly housebound with his wife for the last week. Having the gear makes him feel safe, he wrote over WeChat, especially since they are now hard to find in stores.

“Some of my friends think I’m taking it too far, but if they’re sick next week I won’t be surprised,” he said. The worry and the overwhelming flow of contradictory information from official and unofficial sources has kept him awake at night. 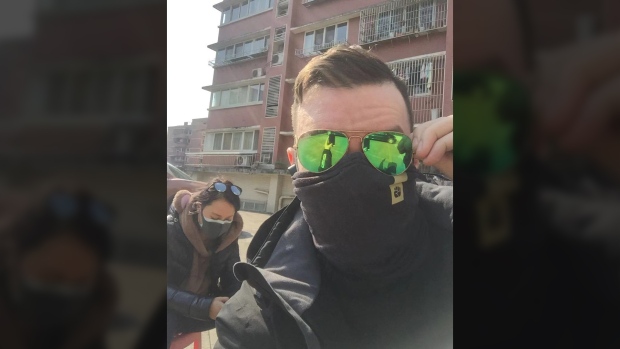 Everyone they know has cancelled plans, he said. He and his wife have also cancelled their own plans for either a trip back to Canada or a mini vacation outside of China. Like countless others, they video chat with relatives and debate over the risks of visiting nearby family, which includes both elderly parents and a one year old baby.

“My wife did a video salsa class last night with 500 people logged in to the teachers,” Wood said. “We are trying our best to stay sane and busy … life goes on.”

Back home in Canada, his family trusts him to be smart, he said, but they too are concerned about the situation in China. And he worries for them as well. Rumours circulating via texts mostly among the local Chinese community in Toronto have reached across the globe into Wood’s phone too.

Despite these worries and the government’s evacuation plans, many Canadians who have made a life in China, with families, jobs, businesses and pets, say they have no plans to leave.

Meanwhile, some 900 km north of Wuhan in Shijiazhuang, Hebei, Toronto-based author Ethan Lou can no longer visit his grandparents at the seniors home where they reside. Initially, visitors had to wear a mask and have their temperatures taken, but rules were tightened several days ago to ban all visitors out of an abundance of caution, he said.

Lou had booked his Spring Festival trip long before the outbreak, and had planned to stay a week in Shijiazhuang to visit extended family. Instead, he left early with his Beijing-based uncle amid concerns that travel between cities even by private car would be prohibited, which could leave Lou stranded in China.

In spite of everything, however, he is not too concerned - yet, and he is not alone.

“I honestly am not too worried about this,” Lou told CTV News by email. “I remember going through all this as a teenager during the SARS matter. And it's not as though I'm in Wuhan itself. China is a big country.”

Andrew Hominuk, an English teacher in Dalian, Liaoling is not too worried either, despite having visited Wuhan over western New Year’ s Eve, before the virus was widely known.

“I’m taking care and staying clean. Dalian only has a few cases right now from people who returned from Wuhan recently,” he said via WeChat.

Even so, the impact of the virus could be felt in this port city situated more than 1,400 km northeast of Wuhan, and just hours from the North Korean border. Hominuk, who is from Toronto, said the shops have run out of fresh vegetables and everything is unusually quiet.

“I’ve been (here) 8 years and never saw it like this before.”

No need to change Canada's plans after WHO declares global emergency: officials