Environment Canada is looking into reports that a tornado that hit Manitoba on Monday stayed on the ground for an “incredible” three hours.

In fact, twisters normally touch down for just a few minutes.

Lang said workers are assessing the damage to determine the strength of the tornado, which travelled approximately 100 kilometres, and appears to have struck hardest near the town of Virden.

Lang said the storm didn’t hit any towns or cities, and there were no injuries reported.

Fred Raynor, a farmer near the town of Tilston, said his two grandchildren and other family members took cover in a cellar as the storm approached. He watched from upstairs.

Raynor said trees were uprooted and fell on the home’s roof.

There were also reports of rotating wall clouds and funnel clouds in southeastern Saskatchewan on Monday.

Regina, meanwhile, was deluged with 73 millimetres of rain Monday, which caused some flash flooding in city streets.

Several members of storm-chasing groups tweeted videos and pictures of the violent storm. 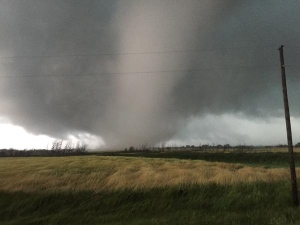