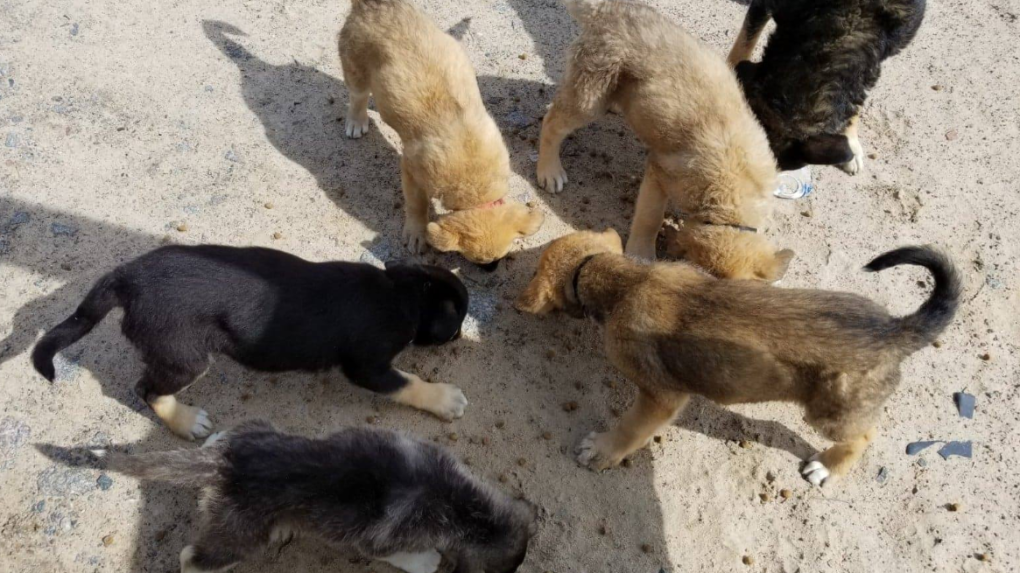 More than 700 dogs have been left starving after wildfires have raged through remote communities in northern Manitoba. (Norway House Animal Rescue/Facebook)

WINNIPEG -- An animal rescue organization in Manitoba has sent a letter to Indigenous Services Canada asking for help with hundreds of dogs left behind when two First Nations communities were evacuated last month due to fire.

Debra Vandekerkhove, the director of Norway House Animal Rescue, estimates about 700 dogs -- 200 in Pauingassi and 500 in Little Grand Rapids -- were stranded after a wildfire forced about 1,400 people to flee.

In the letter dated June 7, Vandekerkhove wrote that the situation for the dogs has become dire and, if left unchanged, will continue to deteriorate. Many younger dogs have already died and the ones left need to be removed, she said.

There is also a concern that the dogs are forming larger, more aggressive packs.

The Canadian Red Cross contacted the rescue group last week because the animals were running out of food. Vandekerkhove said arrangements have been made for more than 6,000 kilograms of food to be flown in, but there are few people in the communities who can distribute it.

"They can't keep up with the amount of dogs that need to be fed," she said Friday.

"We can't get up there. We are not allowed because we are not a part of the emergency measures organization."

The Red Cross is working with Norway House Animal Rescue and the RCMP to distribute the food, said communications adviser Michelle Palansky in an email.

Vandekerkhove said volunteers from the rescue group and from the First Nations would like to be temporarily flown back to help hand out food and to remove any pets that need veterinary help. But that needs approval and funding from the federal government, she said.

The few people who have stayed behind have sent Vandekerkhove pictures of the dogs. Many show puppies that are gaunt and desperately eating the food that they find. There were dogs left without food or water for more than a week inside some homes, she said.

Martine Stevens, spokesperson for Indigenous Services Canada, said the department is supporting the Red Cross in its efforts to help the animals. Offers of assistance are appreciated and "will be shared with First Nation leadership," Stevens said in an email.

The wildfire that blazed towards Little Grand Rapids, about 260 kilometres northeast of Winnipeg, forced hundreds of people in the fly-in community to huddle in a school gymnasium as they waited for the smoke to clear enough for planes to land.

There's been no word on when people will be able to return.

The situation is causing significant stress for the families who had to leave there homes, Vandekerkhove said.

"It is traumatic and emotional for them. This is the one thing that's left behind that is a living being that they are strongly connected to," she said.

"It's important for their own emotional well-being that they know that their pets are going to be OK and there is somebody looking after them for them."

Pictures tell the story. Pictures do not lie. Dogs and Cats are starving and dying. This is the photos of one family of...