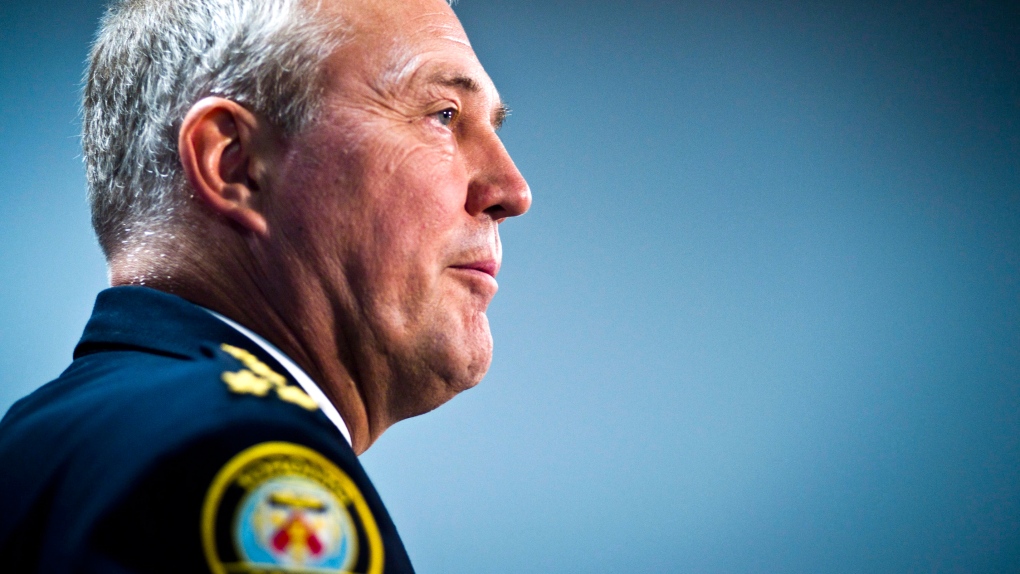 Police Chief Bill Blair has the support of a majority of Torontonians amidst the ongoing Rob Ford scandal, according to a new poll, which found that most respondents believe he should remain on the job despite a previous call by the mayor’s brother that he step down. Blair is pictured above during a press conference in July. (Ian Willms / THE CANADIAN PRESS)

Police Chief Bill Blair has the support of a majority of Torontonians amidst the ongoing Rob Ford scandal, according to a new poll, which found that most respondents believe he should remain on the job despite a previous call by the mayor’s brother that he step down.

The Ipsos Reid poll conducted for CTV/CP24/Newstalk 1010 found that 70 per cent of respondents “disagree” that Blair should step aside until an independent assessment can be done into his comments about the so-called crack video, in which Ford can purportedly be seen smoking crack cocaine.

Blair surprised reporters on Halloween when he revealed that police were in possession of a video, the contents of which are “consistent” with what has been described in media reports. Blair went on to say that he was “disappointed” in what he saw on the video, and called the situation “traumatic” for the city’s residents.

Afterward, Coun. Doug Ford, the mayor’s brother, accused Blair of being biased and called for him to take a leave of absence. Ford also called for a review of the chief’s words by the Office of the Independent Police Review Director.

According to the poll, a majority of residents in each part of the city disagree that Blair should step aside, including:

When rating Blair’s credibility versus the credibility of Rob and Doug Ford, residents believe Blair is far more credible than either of the Fords.

According to the poll, Blair received an 86 per cent credibility rating, compared to 30 per cent each for Rob and Doug Ford.

“It should also be noted that when residents are asked to indicate the extent to which they trust a number of public figures in carrying out their job, Police Chief Bill Blair has 73 per cent trust compared to Mayor Rob Ford at 34 per cent,” the poll says. Doug Ford is at 30 per cent for trust.

As for each man’s personal job performance:

And 71 per cent disagree that Blair and elements of the Toronto media are conspiring to “get the mayor,” as Doug Ford has suggested, while 29 per cent said they do believe there is a conspiracy.

Meanwhile, some have suggested that Blair call in another police force, the Ontario Provincial Police or the RCMP, to investigate the mayor.

That leaves a “sizable minority” who believe that another agency should review evidence already uncovered or further the investigation and probe whether the mayor has broken any laws.

The findings follow polls from earlier this week that showed that 62 per cent of respondents said “there’s no way” they would vote for Ford “under any circumstance,” while 72 per cent said Ford’s insistence on remaining in office after admitting he had smoked crack cocaine is “not acceptable.”

The poll was conducted between Nov. 8 and 12 and includes interviews with 665 respondents via an online panel. The poll is considered accurate to within +/- 4.3 percentage points.