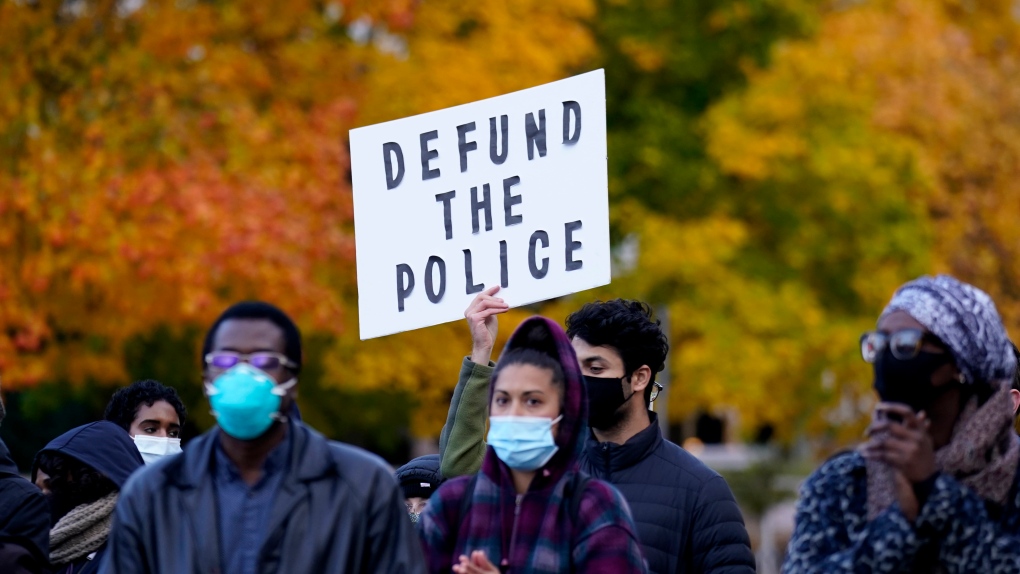 A person holds a sign calling for the defunding of the police during a rally after an Ottawa Police constable was found not guilty of manslaughter, aggravated assault and assault with a weapon in connection with the 2016 death of Abdirahman Abdi, a 37-year old Black man, in Ottawa, on Tuesday, Oct. 20, 2020. THE CANADIAN PRESS/Justin Tang

TORONTO -- A new survey conducted between Aug. 26 and Sept. 1 by the non-profit Angus Reid Institute found that nearly two-in-five Canadians believe there is a “serious problem” with the way police interact with Black, Indigenous and other non-white people across the country.

Although the responses vary by the respondents’ different racial backgrounds, as well as generational and political differences, nearly two-thirds (63 per cent) agreed that systemic racism exists within the RCMP.

The data was collected through a randomized sample of 5,005 Canadian adults who completed an online survey. The survey carries a margin of error of +/-1.5 percentage points, 19 times out of 20.

Despite the resounding sentiment, respondents were less likely to believe there is a problem with how police treat people of colour in their own community. Only 27 per cent say it is a serious problem where they live.

Over the summer, RCMP Commissioner Brenda Lucki faced criticism for saying that systemic racism did not exist within the police force.

“I have to admit, I really struggle with the term ‘systemic racism,’” Lucki told The Globe and Mail in June. “I have heard about five or 10 different definitions on TV. I think that if systemic racism is meaning that racism is entrenched in our policies and procedures, I would say that we don’t have systemic racism.”

The following day, Prime Minister Justin Trudeau contradicted the commissioner telling reporters, “Systemic racism is an issue right across the country, in all of our institutions, including in all of our police forces, including in the RCMP,” Trudeau said. “Recognizing that is difficult and we need to make sure that we are moving forward in really meaningful ways and that is also going to be difficult.”

Lucki later backtracked her comments in a statement on June 12 saying, “I did acknowledge that we, like others, have racism in our organization, but I did not say definitively that systemic racism exists in the RCMP. I should have."

She added, “As many have said, I do know that systemic racism is part of every institution, the RCMP included. Throughout our history and today, we have not always treated racialized and Indigenous people fairly."

The summer killing of George Floyd, a Black man seen in a video pleading and gasping for air as a white Minneapolis police officer pressed a knee against his neck, prompted mass protests across the United States as well as cries to defund the police.

Since the initial outcry, human rights advocates in Canada have shifted the discussion to look at systemic racism issues in this country. Last week, Assembly of First Nations National Chief Perry Bellegarde called on RCMP Commissioner Lucki to resign after she defended the RCMP’s initial decision not to intervene in a violent dispute targeting Mi’kmaw lobster harvesters in Nova Scotia.

Public Safety Minister Bill Blair has since given the green light to a request for additional RCMP support in Nova Scotia, but critics are still questioning why the force did not intervene when tensions initially started to rise.

While the majority of Canadians may agree that there is a systemic racism problem within policing, when it comes to policy, calls to reduce or defund police department budgets are not widely supported, though structural change is desired by many.

According to the Angus Reid survey, only one-quarter of respondents said police funding should be reduced where they live. The survey found the number of people in favour of reducing police funding increased in areas like Toronto and Winnipeg.

The poll goes on to say, “A firm majority (63 per cent) of Canadians across the country would rather see investment in social welfare strategies rather than increasing police presence in high crime areas.”

The headline of this story has been adjusted to reflect that the survey found two-thirds of respondents believe systemic racism exists within the RCMP.