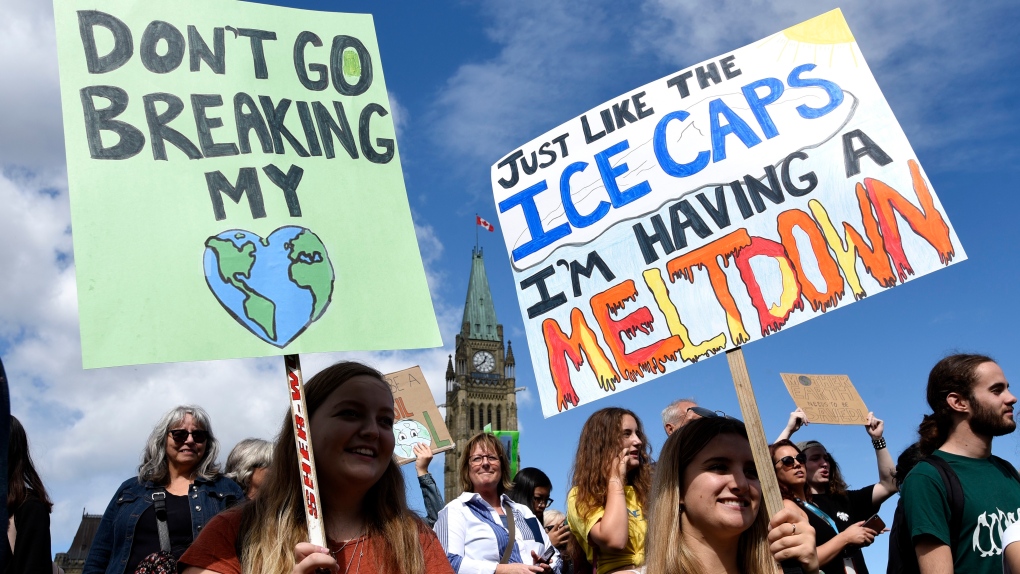 People rally on Parliament Hill in Ottawa as part of a Global Climate Strike, protesting against climate change and inaction, on Friday, Sept. 27, 2019. (THE CANADIAN PRESS/Justin Tang)

TORONTO -- Most Canadians aren’t very confident that they and their peers are doing enough to protect the environment, according to a new Nanos Research survey.

The national survey, commissioned by CTV News, found that seven in 10 adult Canadians are either not confident or “somewhat not confident” that the country is changing its consumption and lifestyle quickly enough to deter climate change. Just under a quarter of Canadians are more optimistic, saying they were confident or somewhat confident. The remaining five per cent said they were unsure.

Women tended to be slightly less confident than men in the efforts to combat climate change, with just under 75 per cent responding they were not or ‘somewhat not’ confident. Just under 67 per cent of men replied the same.

Other newly released Nanos Research surveys tackled related issues of energy consumption and environmental spending. Canadians appeared to be split on the subject of approving new energy projects. If the projects don’t align with targets to reduce greenhouse gases, nearly one in two Canadians (48 per cent) said they should not be approved, with respondents in B.C. and Quebec most aligning with that view. If the projects create new jobs, about two in four (41 per cent) respondents said they should be approved, an opinion more likely to be held in the Prairies, according to the survey.

The environment was the most frequently identified area for increased government spending in 2020, according to a third new survey. Just over one in four (26 per cent) of respondents selected the environment as the area where the government should spend more money this year. Other areas included health care (24 per cent), job creation (16 per cent), and poverty (12 per cent). Canadians were relatively split on whether their personal taxes should be reduced if it increases the deficit and debt Canada owes.