Machete-attack hero describes the fight: 'He was swinging to kill' 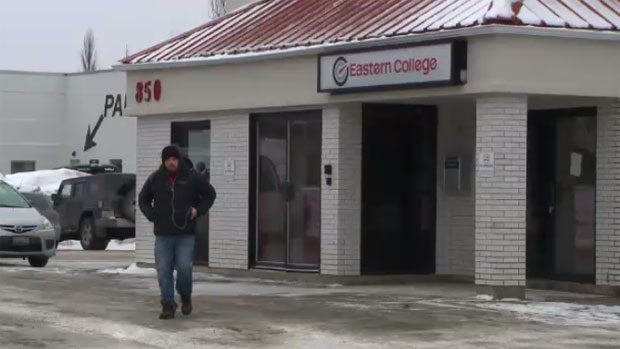 FREDERICTON -- The bloodshed began with a knock on the classroom door.

James Raoul was among about 15 students in an Eastern College criminology class in Fredericton around 8:30 a.m. on Jan. 20, 2014, when fellow student Luke Powers arrived late.

"There was a knock at the door. It was him. He had a bag. He mumbled something. He took the machete out of the bag and came at me," said Raoul, who will be decorated by Gov. Gen. David Johnston next week for his actions in the ensuing attack.

Raoul, a 31-year-old former soldier and father of two boys, likely saved his instructor's life as Powers swung the machete savagely around the classroom.

"There was a lot of blood. Bad wounds. He was swinging to kill," said Raoul.

He and another Eastern College student who helped subdue Powers, Sylvain Pedneault, will be among 31 Canadians given Medals of Bravery Monday for acts of heroism.

The two men spoke for the first time publicly about the attack in interviews Friday with The Canadian Press.

Raoul said Powers had been a friend. The two had trained briefly together in the Forces before Powers was medically discharged after an injury, and Raoul tried to look out for him when they found themselves at Eastern College together.

"If anything, I would say I was his only friend in the world. Once we started school together, I reached out."

Raoul, who is originally from Sydney, N.S., said he usually picked Powers up on the way to school, but Powers had told him that morning he'd meet him there.

When Powers arrived and pulled out the 16-inch machete, he went directly at Raoul, who was sitting four seats back.

"Had I not put up my hands, I don't know what damage would have been done."

The teacher yelled at Powers to stop, and he immediately turned on her. He was athletic and fit, and inflicted serious injuries with the sharp blade.

"He almost cut off her hand," said Raoul, who was dazed and bloody from his own wounds but ran to help.

"He managed to hit her a couple times before I realized what was happening and got out of my seat."

Raoul said he knocked Powers hard into a corner by pushing a long table into him, and then flipped the table at him. Raoul grabbed the arm holding the machete and threw Powers against one wall, then another, before the pair fell to the ground and rolled out to the hallway.

"It was intense. I was bleeding and it was all over my face and starting to get hard to see."

Pedneault, another former soldier who was in a neighbouring classroom and heard the yells for help, jumped into the fray.

"All I could do was control the knife, so I jumped on the knife. We struggled a little bit, he was trying to flip me," said Pedneault, who then felt a pain in his back and realized Powers was biting him.

"It was a blessing that he bit me...because I knew exactly where he was, where his head was. So that's when I struck him with my elbow."

Powers was quickly pinned and the machete taken from him.

The instructor - who Raoul said was "the best I ever had" - suffered the most injuries, with wounds to her hand, arms, and the back of her head.

"The poor lady had her life ruined by this attack, and my heart breaks for her."

The drama lasted no more than two minutes, and Raoul said two years later he still doesn't know why it happened. Powers pleaded guilty to three charges, but was found not criminally responsible in April 2014. He is confined to a psychiatric hospital.

"Do I agree with it? No," Raoul said of the not-culpable finding. "Do I have to live with it? Yes."

"What his motives were, only he knows."

A friend theorized that Powers, who was also carrying a knife, intentionally targeted the biggest guy first in a room full of young smaller females and small men.

"Had he taken me out, the rest would have been easy pickings."

Raoul is now unemployed, and said he is looking for work but it is difficult in New Brunswick when you're not bilingual.

"I'm a veteran, so I get priority hiring. I'm scouring the job banks."

Pedneault is a civilian employee at CFB Gagetown.

On Monday, both men will get the Medal of Bravery in a ceremony at the Citadelle of Quebec.