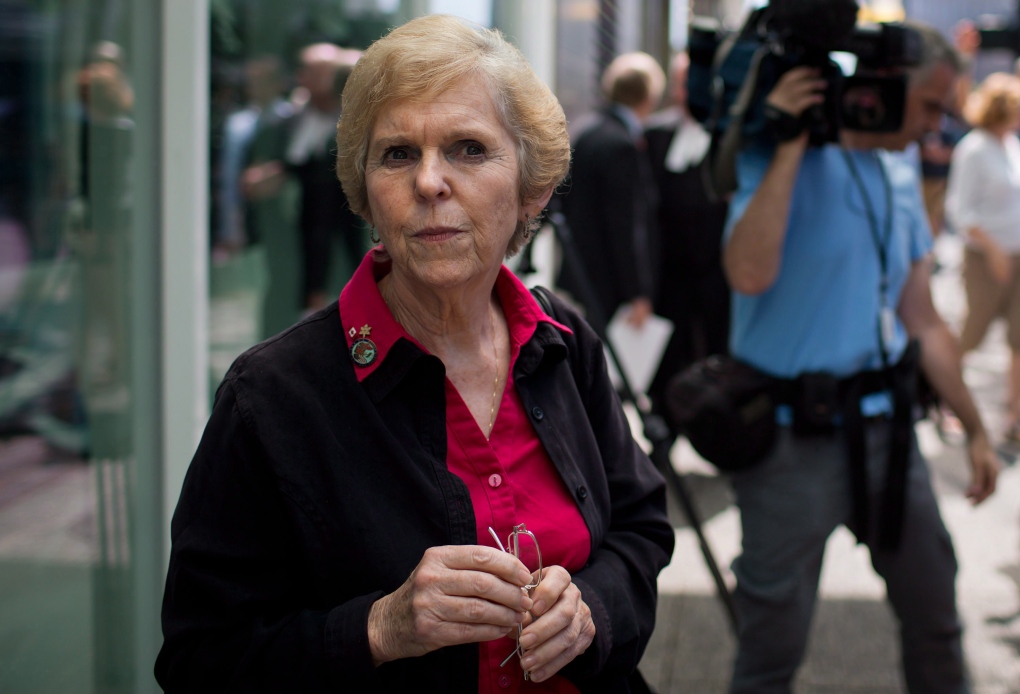 Jackie Scott, who was born out of wedlock in England in 1945 to an English mother and a Canadian soldier and is seeking a judicial review of her exclusion from citizenship based on the 1946 Canadian Citizenship Act, leaves Federal Court in Vancouver on July 22, 2013. (Darryl Dyck/ THE CANADIAN PRESS)

VANCOUVER -- Canadian citizenship laws may need to be overhauled if a so-called "lost Canadian" wins her legal battle.

Jackie Scott, 68, was refused citizenship even though she came to Canada with her British mother and Canadian father at the age of two. A judicial review of that refusal was scheduled for July, but Scott put it on hold so she and her lawyers could broaden the court action.

Documents filed Friday in Federal Court in Vancouver show Scott is petitioning for "declarations" from the court that could have serious ramifications for Canadian citizenship, including whether Parliament has total control over who is considered Canadian.

Scott said even though she would have loved to settle her own citizenship dispute back in July, her fight has become about much more than herself.

"It would be very selfish of me just to say it's about me, because it's not," she said in an interview on Monday. "If we're successful we can finally resolve the issue for many people."

Scott was born in England in 1945 to a Canadian serviceman and a British woman and later migrated to Canada.

The government claims Scott's father was legally considered a British subject at the time because Canada's first citizenship act did not come into effect until 1947. The government argued in previous court documents related to Scott's case that "Canadian citizenship is a creation of federal statute. In order to become a Canadian citizen, a person must satisfy the applicable statutory requirements."

However, Scott and her lawyers argue that citizenship has existed outside of statutory law since long before 1947. They are willing to take the case all the way to the Supreme Court of Canada to prove their claim. In July, they debated pursuing a class action, but decided the application they filed last week was more appropriate.

"The declaratory order will have the same force and effect legally," James Straith, one of Scott's lawyers, said via email.

It will "bind the federal government and resolve most, if not all, of these lost Canadian cases."

The application asks for Scott's judicial review to be "converted to an action" that would allow the court to make declarations regarding six main questions, including whether Scott's father was a Canadian citizen and whether citizenship exists as a legal concept and/or right independent of the 1947 Citizenship Act.

"Enough of this nonsense. We want to set precedent," said Don Chapman, the founder of the Lost Canadians. Chapman said too many people are being forced to pursue a lengthy court process because gaps in citizenship law have not been properly addressed by Parliament.

Chapman estimates there may be thousands of people like Scott, but adds no one knows for sure.

"The entire area of citizenship is a disaster that has now evolved into a catastrophe," said Straith, referring to statements made in May by the Chief Justice of the Federal Court.

Chief Justice Paul S. Crampton wrote in a court judgement involving a woman from China that "this case is yet another example of why something needs to be done to address the unacceptable state of affairs concerning the test for citizenship in this country."

Although the case did not involve the status of Canadian citizenship pre-1947 or the passage of citizenship from parent to child, Straith said the comments "apply to the entire spectrum of problems in this area" and the government's continued failure to address them.

One reason Scott and her lawyers decided to put her judicial review on hold was because the narrow nature of such a proceeding prohibited them from introducing evidence related to broader citizenship issues.

Specifically, a document they brought before the court in July -- a 1943 pamphlet issued to Canadian soldiers -- deals "with the historic rights of Canadians as they were going overseas," Straith said.

It states that the soldiers "were fighting as citizens of Canada, not as merely British subjects," he said, noting the presiding judge ruled it could not be considered.

Scott and her lawyers said the pamphlet is just one of many documents that prove their case. In fact, one of the questions in their application is whether the Canadian government is forced to grant citizenship to people like Scott's father because of previous Crown actions, such as issuing the pamphlet.

"There is a concept in Canadian/Commonwealth law called the doctrine of the 'Honour of the Crown,' which primarily has been used in land claims cases where the Crown has basically tried to void earlier agreement made with First Nations," said Straith.

If they lose, Chapman said "we might as well go over to Europe and scratch the maple leaf off (the) gravestones" of Canada's war dead.

For Scott, such a denial would be much more personal.

But Scott said she cannot even hope to describe how happy she would be if they won.

"It's hard to put into the words the emotion that you feel when you can finally say that you're part of the family, and also to be able to give the people that should have their citizenship confirmed just that," she said.

The government has until August 30 to file a response. Scott's new application will likely be heard in court in September.