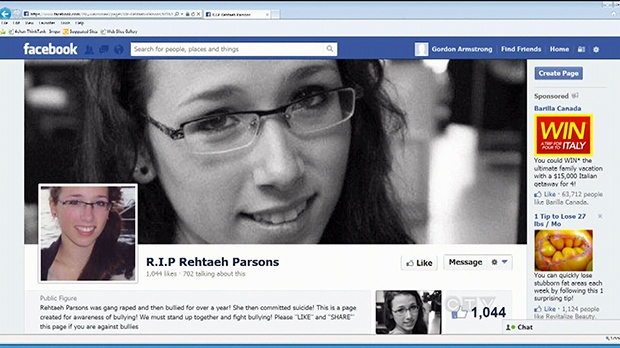 Rehtaeh Parsons was taken off life-support after a suicide attempt last April. Her family said she was harassed after a digital photograph of her allegedly being sexually assaulted was circulated online.

HALIFAX -- The stories pop up on Carol Todd's computer with distressing regularity.

They are tales with an eerily similar template that chronicle the suicides of young people who often had endured the torment of prolonged and relentless online bullying.

In ways, they are much like the story of her own daughter Amanda, a 15-year-old Grade 10 student who took her life a year ago following months of harassment at school and online over images posted on the Internet of her body.

One of the threads tying their deaths together is a cause-and-effect link made by the media, politicians and parents between persistent bullying and the victim's decision to end their life -- a phenomenon that generated its own buzzword -- "bullycide."

It is something Todd and health experts say oversimplifies teen suicide and cyberbullying at the expense of recognizing the complex set of mental health issues that are usually at play in many cases.

"Amanda's story, when you look at all the different pieces, it's very complicated," Todd said from her home in Port Coquitlam, B.C., adding that her daughter had a learning disability that affected her coping skills.

"I don't really like it when they say Amanda was cyberbullied to death. That wasn't the case and I don't think there's enough supports for kids for mental health issues, which is ultimately why they take their own lives."

Todd's death was one of several that spurred governments across the country to sit up and respond to what was being portrayed as a worsening problem for young people who couldn't easily escape the potential anguish of the online world.

In Nova Scotia, 17-year-old Rehtaeh Parsons was taken off life-support after a suicide attempt last April that her family said was brought on by months of bullying. The family said she was harassed after a digital photograph of her allegedly being sexually assaulted was circulated.

Jamie Hubley, an openly gay Ontario teenager, wrote in a suicide note of the pain of bullying and depression before taking his life in 2011.

The cases, among others in the U.S., shone an intense light on cyberbullying and its effects on young people, receiving widespread media coverage and prompting calls for government action.

Dr. Jitender Sareen, a psychiatrist and professor at the University of Manitoba, says much of the coverage gave the facile notion that cyberbullying causes suicide, overlooking possible mental-health issues.

"Being cyberbullied can be the straw that broke the camel's back, but the media and politicians at times simplify the issue to bullying equals suicide," he said in Winnipeg.

Sareen uses the example of someone with a lung disorder who then dies from a common cold to explain that many young people who take their own lives after being bullied had mental-health issues that affected their coping skills.

A 2012 study of 41 cases of teen suicides found that 32 per cent of the teens had a mood disorder, while another 15 per cent had depression symptoms.

Kelly McBride, a media ethicist at the Florida-based Poynter Institute, wrote in a blunt October post that by simplifying the issues, journalists perpetuated inaccurate information about suicides and bullying.

"When journalists ... imply that teenage suicides are directly caused by bullying, we reinforce a false narrative that has no scientific support," she wrote. "In doing so, we miss opportunities to educate the public about the things we could be doing to reduce both bullying and suicide."

Tim Wall, executive director of the Canadian Association for Suicide Prevention, says that focusing on cyberbullying prevents discussion of other broader issues related to mental health. The barrage of coverage of teen suicides also takes away attention from other groups and their mental health challenges, he says.

"We have a population that is aging rapidly, so that suicide rate is just going to go up and up and we are not talking about that because so much of the attention is being focused just in this one area," he said.

"If we put all of our attention on this one issue of bullying then we're going to miss all the other things that are also contributing to it, so it requires a multi-pronged approach."

In the wake of Parsons' death, the Nova Scotia government introduced the Cyber-Safety Act, which allows people to try to restrict the cyberbully and sue if they or their children are cyberbullied.

Cyberbullying expert and Dalhousie University law professor Wayne MacKay says the issue stretches beyond government and law enforcement. MacKay served as chairman of a task force that submitted a report in February 2012 to the Nova Scotia government on bullying.

The report dismissed the suggestion that there is a rise in teen suicides and strongly cautioned against making the link between cyberbullying and suicide.

"It's really important to not in any way popularize or glamorize (suicide), which then can lead to a kind of bizarre copycat effect," he said in an interview.

The report included seven recommendations on mental health interventions, including having schools linked with psychiatrists and training youth workers on identifying suicide risks. Many of those have been acted on.

Experts and parents say the response needs to reach beyond punitive, legislative change and work on improving kids' mental health and their coping skills, while boosting mental health resources for youth.

"It's not just about legislation," said Todd, adding that her daughter died on World Mental Health Day. "Legislation is the end piece -- there's all the education and prevention before that."

Wall agrees, saying governments haven't found their footing completely when it comes to addressing the problem.

"We haven't yet caught up to this issue of cyberbullying in terms of developing a comprehensive response to it," he said. "My hope is that we'll be involved in a national forum to look specifically at the issue and how we can address it."