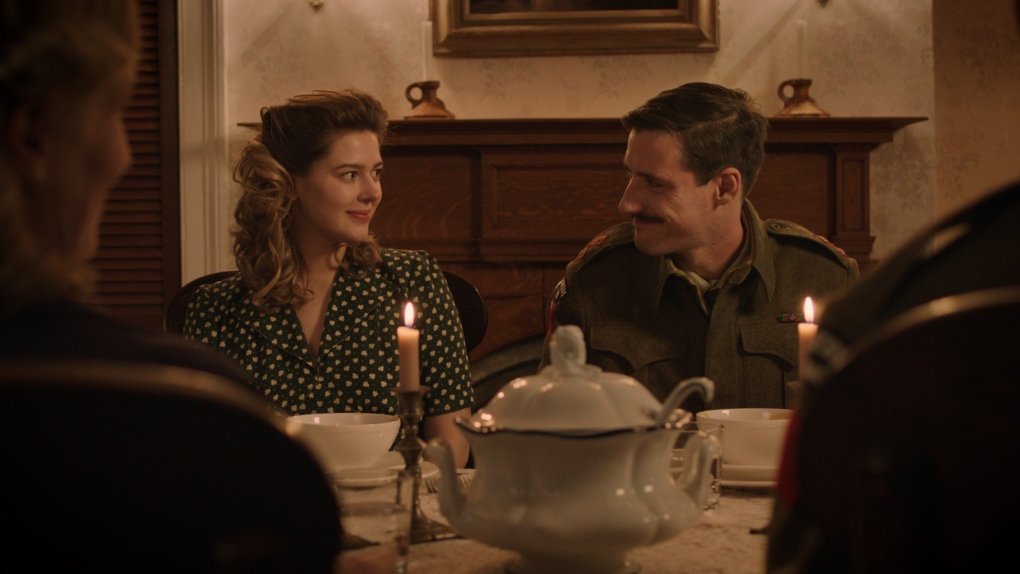 Canadian soldier Lt. Wilf Gildersleeve of the Seaforth Highlanders and his eventual wife, Dutch civilian Marguerite Blaisse, are seen in this image taken from the latest Heritage Minute. (Historica Canada)

TORONTO -- The latest Heritage Minute from Historica Canada commemorates Canada’s contribution to the liberation of the Netherlands 75 years later.

On May 5, 1945, Canadian troops were among several Allied nations who helped to liberate the Netherlands from Nazi occupation following six months of fighting in the region. May 5 is a national holiday in the Netherlands known as “Liberation Day.”

To mark the anniversary, Historica Canada’s latest Heritage Moment tells the story of Canadian soldier Lt. Wilf Gildersleeve of the Seaforth Highlanders, who met his eventual wife, Dutch civilian Marguerite Blaisse, during a parade in Amsterdam two days later that was meant to celebrate the country’s liberation.

Blaisse moved to Canada with Gildersleeve after the war. The couple remained together and living in Vancouver until they both passed within six months of each other in 2001.

Historica Canada President and CEO Anthony Wilson-Smith said during a recent phone interview with CTVNews.ca that the two lived an “enormously happy life together” and had eight children along the way.

“(Their story) would be fairly well-known around Vancouver where they spent more than half a century before they passed, but it’s not well known nationally,” he said.

Wilson-Smith hopes this latest commercial brings some perspective to those watching.

“Things that happened 75 years ago still resonate today,” he said. “I hope people who watch it put themselves in the shoes of the young Canadians who went out to war and think to themselves: ‘If that issue came up today, would I have the same courage to go off for six years and fight for my country?’”

Under Nazi control during the Second World War, about 120,000 Dutch Jews were sent to concentration camps, many of whom died there. Meanwhile, young Dutch men were forced into labour and more than 20,000 Dutch civilians starved to death as food supplies were cut off in the region.

During the final few months of the war in the Netherlands, more than 5,000 Canadian troops were killed or wounded in battle.

“The whole Allied forces were involved, but Canadian forces played a particularly important role, as evidenced by the close relationship that’s existed ever since between the Dutch who’ve never forgotten Canadians,” Wilson-Smith said.

Heritage Minutes began in 1991 as way of displaying Canadian history through commercials on TV. To date, there have been 94 Heritage Moments, ranging from the story of Toronto’s Kensington Market to that of Lucy Maud Montgomery, author of “Anne of Green Gables.”

Wilson-Smith said the newer Heritage Minutes typically cost between $250,000 and $300,000 to make and Historica Canada can receive more than 100 applications from production companies who want to be involved.

This latest Heritage Minute was created with the help of the Dutch government.

“We just thought that it was really important that a story of such importance and a friendship between two countries, that we could actually reflect the collaboration between these two countries,” Wilson-Smith said.

In a news release, Henk van der Zwan, the Dutch ambassador to Canada, said the commercial is a “beautiful homage” to mark the anniversary.

“We are proud that Historica Canada with this Heritage Minute pays tribute to all Canadians who bravely fought for our freedom,” he said. “The people of the Netherlands will be forever grateful.”

The connection between the Netherlands and Canada remains visible today through the Canadian Tulip Festival, held each May in Ottawa.

Following the Second World War, the Dutch royal family gifted Canada with 100,000 tulip bulbs as a symbol of gratitude for having sheltered the future Queen Juliana and her family for three years during the war.

Queen Juliana promised to send 10,000 tulips bulbs to Canada every year after 1946 and the festival was born out of a desire to display the gift.

While most of the festival performances have moved online this year due to COVID-19, the estimated one million tulips were planted last fall, meaning they will still bloom around the city in the next few weeks.