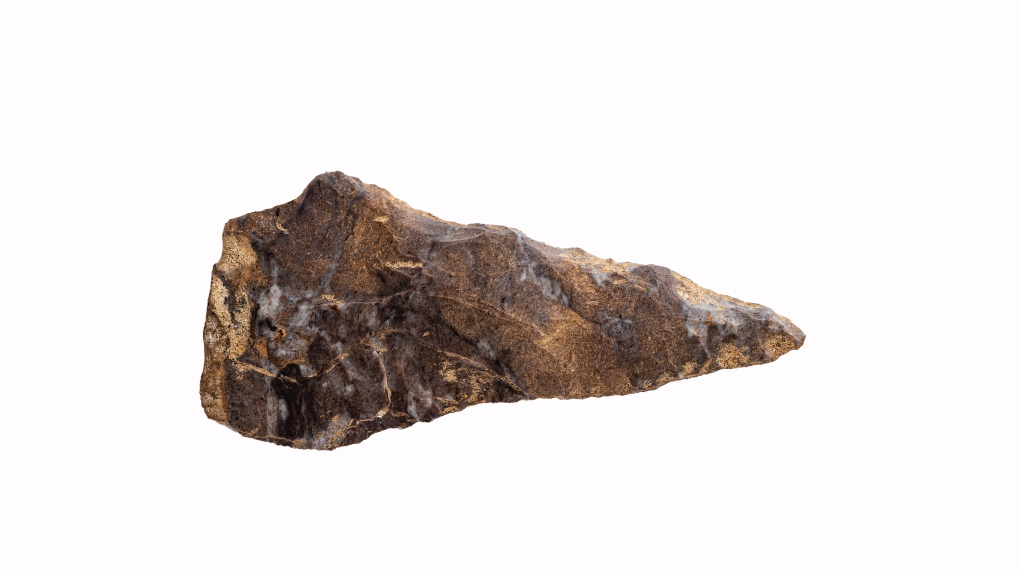 This stone knife, shown in this handout image, dating from 2,500 - 4,000 years ago, is thought to have been used by the Algonquin people. It was disovered by archaeologists on Parliament hill during the renovation of the Parliament buildings in Ottawa. It is to be returned to the stewardship of local First Nations, and put on show when Parliament reopens. THE CANADIAN PRESS/HO-Public Services and Procurement Canada)

OTTAWA -- An ancient Indigenous knife unearthed during the renovation of Centre Block will be the first artifact found on Parliament Hill to be returned to the stewardship of the Algonquin people who live in the Ottawa region.

Archeologists say the return of the stone knife, which is estimated to be 4,000 years old, is a historic move that officially recognizes Indigenous Peoples inhabited the land -- considered unceded territory -- that is now the site of Parliament Hill.

The Kitigan Zibi Anishinabeg, an Algonquin First Nation based about 130 kilometres north of Gatineau, Que., and the Algonquins of Pikwakanagan First Nation, about 150 kilometres west of Ottawa, are to share ownership of the artifact.

It will be displayed on Parliament Hill when the refurbishment of Centre Block finishes and the building reopens, which is not expected to happen until at least 2030.

Until then, it will be shown in Indigenous communities, including schools, according to Doug Odjick, a member of the Kitigan Zibi Anishinabeg council.

The knife, shaped from Onondaga chert quarried in Ontario or New York state thousands of years ago, is not the first Indigenous artifact found in the parliamentary precinct. Shards of pottery and a shell bead were found on Parliament Hill in the 1990s.

However, Ian Badgley, manager of the archeology program at the National Capital Commission, said the knife's discovery had prompted a new approach by the federal government to returning First Nations artifacts.

"It's the first time that the government of Canada has accepted a pre-contact artifact as indicating use of Parliament Hill by the Indigenous population," said Badgley, who is also archeological consultant to the two First Nations who will take stewardship of the knife.

"It's one artifact, but it is really remarkable how it has spawned an interest in the Canadian government in working with the Anishinaabe Algonquins."

Jeremy Link, a spokesman at Public Services and Procurement Canada, said: "Discussions are ongoing on how to transfer joint ownership of this artifact to the communities."

The knife's discovery, by archeologists working on the revamp of Centre Block, coincided with the capital's first archeological field school, aimed at training First Nations archeologists.

The field school, which this year excavated the site of an Algonquin camp in Ottawa, will now be an annual event near the capital.

There are plans to establish field schools across Canada to train First Nations archeologists and give Indigenous Peoples greater control over their own excavations.

For many thousands of years, the Ottawa Valley was a trading hub for First Nations from across North America, because of its location at the confluence of rivers, which made travel by canoe easier. This has made the capital region a rich seam for archeologists.

They have dug up pre-contact artifacts originating from across North America, including shell beads and alligator teeth, and knives and other tools made from stone found far from Ottawa.

These were likely passed on as trade goods by different Indigenous communities over many seasons.

"The things that have been found in and around Ottawa have come from places as far as New York, to Hudson Bay to the West Coast as far as California," said Odjick, who is responsible for the education, culture and language portfolio on the band council.

"The knife that was found on Parliament Hill still has a point. It's about two-and-a-half inches long and it kind of looks like a spearhead. It definitely had a handle. It was from the early Woodland to late Archaic period, 2,500 to 4,000 years old."

The two First Nations who will share the knife are in talks with the federal government about "showing it off," said Odjick. "We would like it to be at the main entrance of Parliament."

The refurbished Centre Block is to have more Indigenous elements, including carvings by Indigenous people who are being recruited to work there, according to Public Services and Procurement Canada which is in charge of the renewal project.

This report by The Canadian Press was first published Oct. 17, 2021