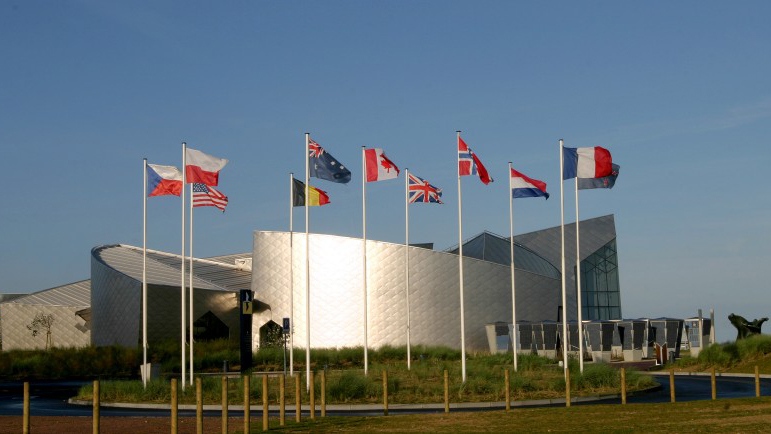 The Juno Beach Centre in Courseulles-sur-Mers, France is pictured in this undated file photo.

OTTAWA -- Garth Webb was a 25-year-old lieutenant when he landed on the beaches of Normandy on June 6, 1944, one of thousands of Canadian soldiers to take part in the greatest amphibious landing in military history and the turning point in the Second World War.

When Webb joined other veterans in commemorating that pivotal event five decades later, he was struck by the lack of a tangible reminder of the sacrifices that he and the rest of the Canadians made on D-Day -- and he set out to build a centre dedicated to that purpose.

The Juno Beach Centre in Courseulles-sur-Mers, France, was the result of that effort, and while Webb died in May 2012 at the age of 93, the centre remains as a tribute not only to his perseverance, but that of all Canadians during the Second World War.

Some 15 years after it opened, however, the Juno Beach Centre is starting to feel the pinch, which is putting its immediate and long-term operations under pressure, if not at risk.

"We are just at the covering-costs phase right now," said Mike Bechthold, executive director of the Juno Beach Centre Association.

"And if things continue unchanged, the cash reserves of the organization are going to be gone in three years -- maybe less, because we're having to fund that operational shortfall."

The Juno Beach Centre was officially opened in 2003 after years of fundraising by Webb and other veterans and volunteers, including donations from the federal government and Walmart Canada, both of which continued to provide financial support over the next decade.

About 1.1 million visitors have been to the museum, while the not-for-profit association behind it has hosted groups of Canadian teachers and students in France and organized exhibits and other activities at home to raise awareness of Canada's Second World War history. Prime Minister Justin Trudeau is expected to join their ranks next week when he visits Juno Beach to mark the 75th anniversary of the landing.

And while the federal government recently renewed its annual $500,000 contribution for the next five years to help with the museum's operations, which Bechthold said was welcome, Ottawa's contribution has remained the same for 16 years -- even as expenses have gone up.

"Inflation is certainly part of it," he said of the rising costs. "One thing that people don't generally think about is the security environment has changed considerably since 2003, and now there are significant new costs that we have to deal with every year for security."

Last year, the centre and association posted a $236,000 loss. One reason was the costs associated with a fundraising campaign that Bechthold admitted fell far short of its goals, thanks in part to donor fatigue from the 100th anniversary of the Battle of Vimy Ridge in 2017.

Yet the Juno Beach Centre Association also posted weak financial returns in 2017, and there are fears their new normal will endanger the organization's different projects, such as a teacher-training program and the centre's overall renewal.

"The museum is getting to that point in its life cycle where it's time to revisit some of the exhibits," said Bechthold. "Things need to be overhauled, renewed and changed."

One example is the Canada Room, the last room in the museum, which is intended to tell the story of Canada today, 75 years after D-Day. The room, Bechthold said, is "tired" and in desperate need of a $750,000 upgrade the museum can't afford.

"We've drawn up everything, we've gone as far as contracting a museum-services company to get the thing done, but we don't have the money to make it happen."

The federal government does have a special fund to help museums and organizations commemorate Canada's military history, but it only covers commemorations on Canadian soil, which means the Juno Beach Centre does not qualify.