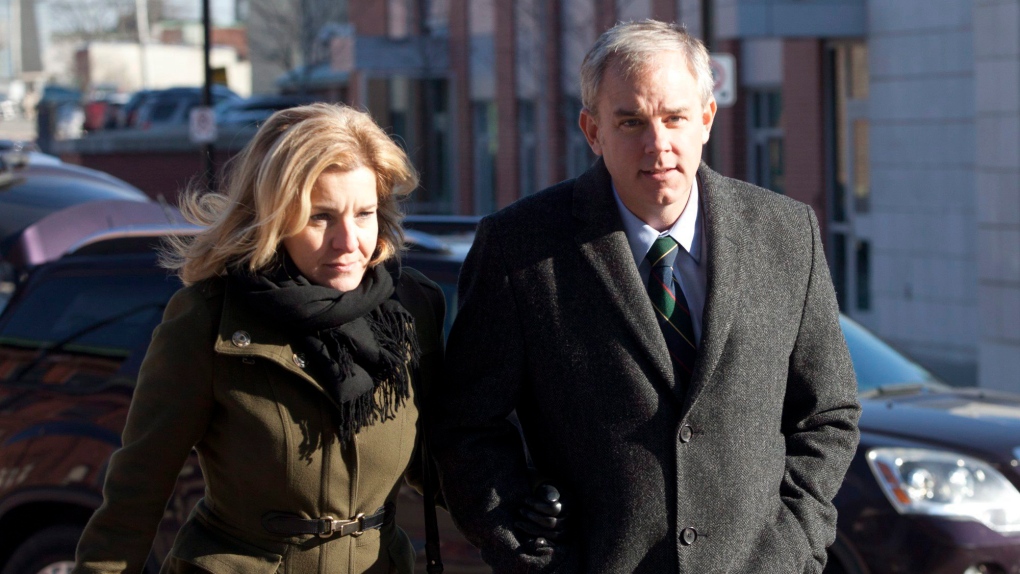 Dennis Oland arrives at the Saint John Law Courts building with his wife Lisa following a lunch break after spending the morning on the stand at his trial in Saint John, N.B., Tuesday, Dec.1, 2015. (Ron Ward / THE CANADIAN PRESS)

SAINT JOHN, N.B. -- The judge hearing the murder trial of Dennis Oland began his final instructions to the jury Tuesday, repeatedly emphasizing the need for caution and common sense as jurors assess the evidence presented during 12 week of testimony.

Oland has pleaded not guilty to second-degree murder in the death of his father, well-known businessman Richard Oland, whose family founded a business institution in the Maritimes, Moosehead Breweries Ltd.

Justice John Walsh of the Court of Queen's Bench told the jury that Dennis Oland is presumed to be innocent unless the Crown proves his guilt beyond a reasonable doubt.

"It is not enough for you to believe Dennis Oland is probably or likely guilty," he explained.

Walsh reviewed the testimony of several police officers regarding the crime scene and the collection of evidence, noting that in many cases there were "presumptive tests" done for the presence of blood.

"It is so dangerous to draw a conclusion on a presumptive test for blood," said Walsh, whose review of DNA evidence was very detailed.

He reminded the jury that DNA testing on a brown jacked owned by Dennis Oland found a number of spots that matched the profile of Richard Oland. The chance that it was not Richard Oland's DNA is 1 in 20 quintillion.

After a power outage caused a 90-minute delay, Walsh continued to focus on DNA evidence and then shifted to Richard Oland's social interactions, noting he was very touchy, often holding someone's arm or putting his arm around them.

During the trial, Dennis Oland testified that his father chewed his cuticles and often had scabs on his head, adding that there were times when his father could have had contact with his brown jacket.

Walsh said it was up to the jury to decide on Dennis Oland's credibility.

Earlier, Walsh reviewed the testimony of various experts including blood spatter expert Patrick Laturnus, who said the killer and the weapon would have a significant amount of blood spatter on them.

However, Walsh said it's up to the jury to decide how much blood the killer would have had on them.

Walsh also highlighted testimony from police that a drywall hammer could have been the murder weapon. He said that was "pure conjecture."

Defence lawyer Alan Gold told jurors Monday that after three months of testimony, they are no closer to knowing who killed Richard Oland than when the trial began.

Crown attorney P.J. Veniot said Dennis Oland was the last person to see his father alive and had opportunity to kill him.

There are 13 jurors, eight men and five women. Walsh has said he will conduct a draw and one juror will be dismissed once he completes his instructions, leaving 12 to reach a verdict.