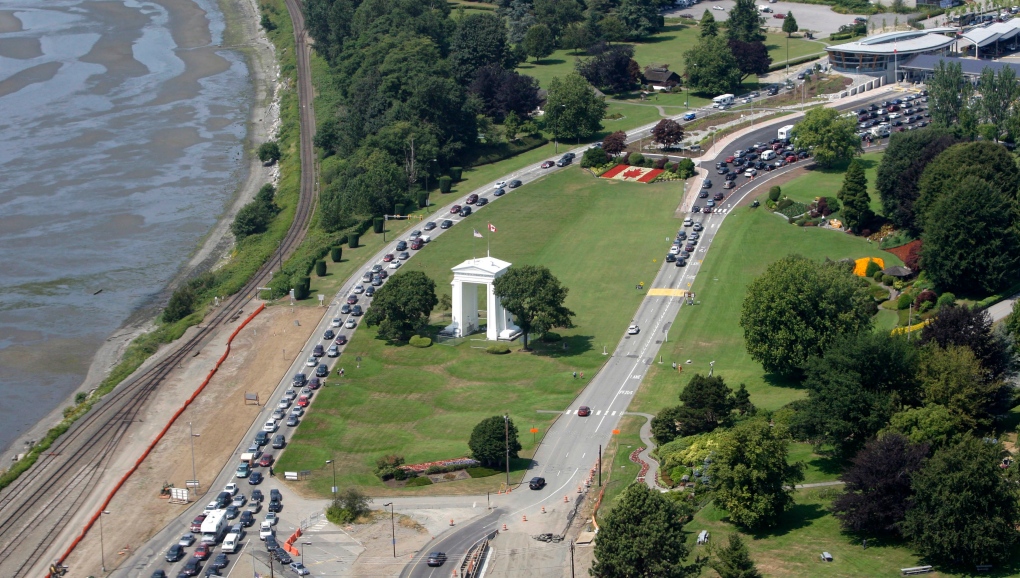 In this July 24, 2009 file photo, cars line-up heading into the United States at left and into Canada at right adjacent to Boundary Bay at a border crossing at Blaine, Wash. (AP Photo/Elaine Thompson)

VANCOUVER -- A French teenager who accidentally crossed the border from Canada to the United States and reportedly wound up detained for two weeks should serve as a warning to Canadians, says an immigration lawyer.

Len Saunders, a lawyer in Blaine, Wash., said while aspects of the case are unique, it should still be considered a reminder to Canadians who walk their dogs or go jogging along the border.

"It's a warning for Canadians to be careful if they're close to the border, not to go too far south, because this could happen to a Canadian," he said.

Cedella Roman, a 19-year-old French citizen, could not be reached for comment. But she told CBC she was visiting her mother in B.C. and was jogging near the border when she inadvertently crossed into the U.S. on May 21.

In an emailed statement, U.S. Customs and Border Protection confirmed Roman was arrested by Border Patrol agents in Blaine. At the time, she was nearly 800 metres into the U.S. and was travelling south, it said.

"Ms. Roman bypassed the Peace Arch port of entry, which is visible from the beach she traversed to enter the U.S., and she was not carrying identification," it said.

If a person enters the U.S. at a location other than an official port of entry and without inspection by a border officer, they have illegally entered the U.S. and will be processed accordingly, it said.

Roman was transferred to the custody of Immigration and Customs Enforcement at a Tacoma detention centre the next day, it added.

"It is the responsibility of an individual travelling in the vicinity of an international border to maintain awareness of their surroundings and their location at all times to ensure they do not illegally cross the border.

"Additionally, it's important for people travelling near the border to carry identification at all times, so that agents or officers can easily verify their identity."

Saunders said there are lots of illegal immigrants -- typically from India or China -- who travel to the U.S. via Canada.

"When (Border Patrol) run into someone who's French ... they don't know if they're coming here illegally or just made an honest mistake," he said.

"If it's a non-Canadian, I think they just assume the worst and take the person into custody."

Saunders said he's heard from Canadians who have been deported from the U.S. after straying across the border accidentally. But the process usually just entails a conversation with an agent who enters their name into a database and tells them to head north, he said.

Canadians often don't realize the incident was recorded as an official deportation until later, when, for example, their Nexus application is rejected, he said.

"The difference with non-Canadians is the Canadians don't have to accept you," he said.

"Where do they send her to, France? She's not Canadian. That's why she went through the whole process of possible deportation."

Typically, joggers or dog walkers don't stray so far into the U.S. before they're stopped, he said.

But the beach where the woman reportedly became lost has no border signs, so the mistake is understandable, he said, adding that the length of time she was reportedly detained seems "excessive."

Holly Pai, an immigration lawyer in Bellingham, Wash., said she could not assure Canadians that a similar incident would not happen to them.

"I would have been more surprised a couple years ago, but everything's so unpredictable these days," she said.

Aside from entering the United States illegally, Roman was detained because her identity could not be confirmed as she was not carrying identification, Customs and Border Protection said. It referred questions about the length of her detention to Immigration and Customs Enforcement, which did not immediately respond to a request for comment.