Residents of a Montreal apartment building say they were shocked when a jet tire fell from the sky, crashing through the roof and leaving a hole in one woman’s kitchen ceiling. 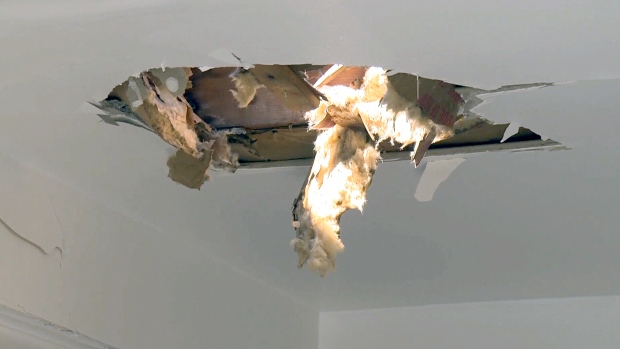 People living in the building, located in the city’s Saint-Laurent neighbourhood, said they heard a loud thud just before 2 a.m.

A woman living on the top floor found a hole in her roof and a jet tire in her apartment. At roughly 5 a.m., she went to inform her landlord.

"This morning my tenant came home to an apartment with a hole in her kitchen ceiling; she could see through the kitchen into the sky," the landlord, who did not want to be identified, told CTV Montreal.

"She came down at 5 a.m., rang our doorbell panicking and we went up to investigate," she added.

The woman was stunned that a plane tire had crashed into the building.

"I think it's ridiculous … I mean there's got to be quality checks, someone that makes sure everything is attached and attached well. How can a tire just fall off a plane?"

She added that incident has her questioning the safety of her neighbourhood. The area sees high levels of air traffic overhead because it is on the flight path of Pierre Elliott Trudeau airport.

"It is a very residential area, there's a lot of children here and it makes me angry that something like this happened at all," the woman said. 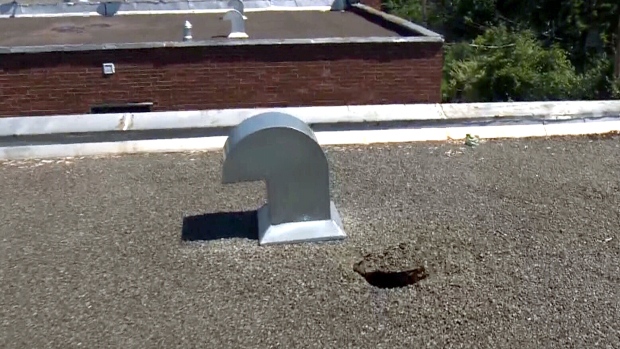 The Transportation Safety Board said Wednesday that the wheel belonged to a Falcon 10 jet, which landed safely at the airport at approximately 2 a.m. Wednesday.

The TSB said the plane was operated by Club Jet. It plans to send an investigator on Thursday.

Club Jet had no comment as of Wednesday evening. 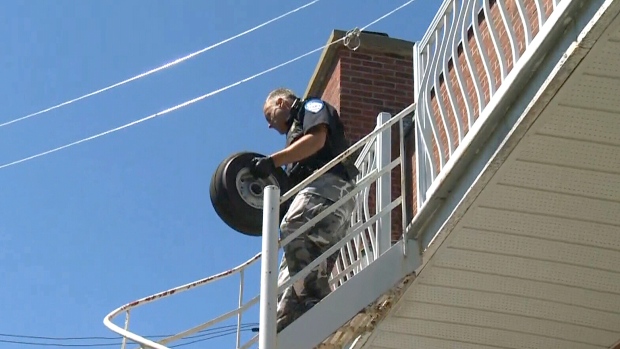 Alan De Sousa, the mayor of Saint-Laurent, said he is following the incident and wants to ensure that residents are safe.

"I'm very thankful there's no injury or any loss of life, but our public security can't just depend on luck," said De Sousa. "I think there are responsibilities that have to be assumed."