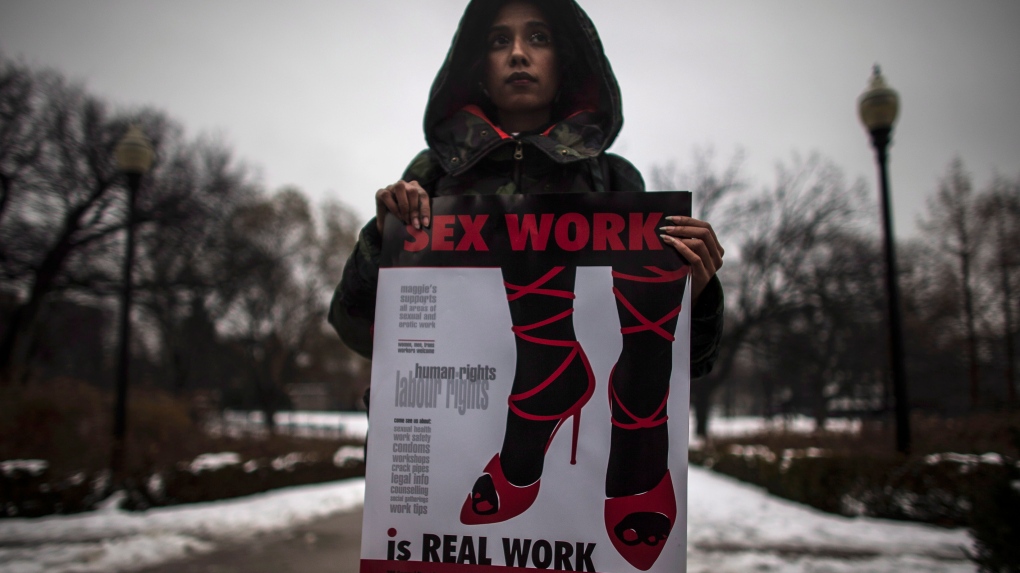 A woman (requested to withhold her name) holds a sign during a rally at Allan Gardens park to support Toronto sex workers and their rights in Toronto, Friday December 20, 2013. (Mark Blinch / THE CANADIAN PRESS)

TORONTO -- It’s been more than a year since 150 human rights organizations came together to demand the decriminalization of sex work in Canada, and in spite of minimal political progress since then, advocates continue to raise awareness about the human rights abuses that sex workers face.

March 3 is International Sex Workers’ Rights Day. Advocates say the annual celebration commemorates the day in 2001 when thousands of sex workers rallied together for a public festival in Kolkata, India. The event was organised by a local group that fights for the rights of sex workers.

Since then, human rights organizations across the globe have subsequently celebrated March 3, and have used the opportunity to highlight the ongoing discrimination and violence that sex workers experience.

Advocates in Canada say federal laws that make it illegal for anyone to purchase sexual services continue to put sex workers in a vulnerable position, where their health and safety are at risk.

“The federal government has expressed repeated and full support for bodily autonomy and sexual and reproductive rights but continues to uphold harmful legislation that Prime Minister Trudeau himself voted against in 2014,” Sarah Kennell, director of government relations at Action Canada for Sexual Health and Rights, said in a statement. “We are asking Prime Minister Trudeau and the Federal government to take action and decriminalize sex work.”

Kennell notes that the COVID-19 pandemic has had a disproportionate negative impact on the health and rights of sex workers across the country. She says sex workers have been left out of financial support initiatives and forced to put their health concerns aside in order to earn money for their survival.

To mark the day, NSWP have launched new infographic and animation formats of key advocacy tools. Each was designed and created by Smo Sienkiewicz.

Duffy says there are a variety of reasons why someone may rely on sex work, including discrimination from what would be considered an “ordinary” nine-to-five job. “For some folks such as queer, trans and racialized people; they experience discrimination and barriers to mainstream jobs, and the sex industry is often more accessible and a place where people can find community,” she explained.

Historically, sex work itself has been an industry where people on the margins of society can go and make money to support themselves and their family.

L.K. Bertram, an associate history professor at the University of Toronto, told CTV News that the sale of sexual services is an essential part of Canadian society dating back to the 19th century.

“From 1860 to 1914, virtually all major Canadian cities at some point ran ‘tolerated zones’ where sex work was decriminalized,” Bertram explained. “Sex work was the only escape from the exploitation of mainstream society and it gave women radical access to capital [...] The kind of money you could never make in any other economy in the 1800s. For many women this was a very important economic strategy.”

Bertram added, “Prime Minister Mackenzie King was an avid brothel-goer and he was enshrined and celebrated, and the only reason why sex workers are not is because of archaic attitudes toward gender and sexuality that aren't necessarily true.”

While our collective struggle for human rights unites us, SW must be ready to address all forms of discrimination.