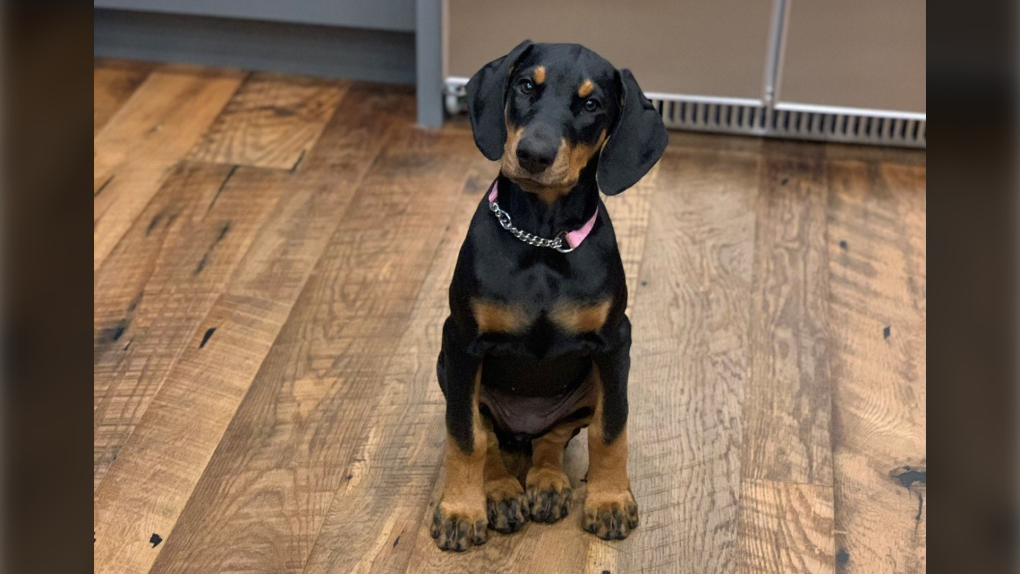 TORONTO -- An Ontario woman is warning dog owners of the dangers of blue-green algae after her puppy ingested the toxic bacteria and died within hours.

Stephanie Cross said she and her family got a Doberman puppy named Zoe in August of last year.

“She was such an amazing dog. We have three young boys and she was just amazing. Literally, the perfect dog,” she told CTVNews.ca during a telephone interview on Thursday.

Last week, Cross and her family and their one-year-old puppy visited friends who had a small man-made pool filled with algae, lily pads, and frogs on their property. She said they had recently pumped the water out of the pool because they were planning to fill it in.

“They pumped out pool and what came out of the pool was all that gunk and like pine cones and whatever else was in the pool,” she explained.

Cross, who lives in King City, Ont., said Zoe had eaten some of the “gunk” from the pool, but they didn’t think anything of it at the time because the puppy was always eating stuff outside.

Later that night, however, Cross said she woke up to the puppy going downstairs, which was unusual.

“I followed her thinking maybe she just needed out, so I let her out and I could see she was sick. She had thrown up, she was having diarrhea,” she recalled.

At first, Cross said she wasn’t too concerned because she assumed her puppy had just eaten something that disagreed with her. It was until she noticed that Zoe was having trouble walking that she became alarmed.

“She could hardly keep her eyes open and like all this foam and saliva was just dripping out of her mouth,” she said.

At 1:30 a.m., the family rushed Zoe to an emergency veterinary clinic where they were told the puppy had some form of poisoning.

The puppy was given an IV and put on an electrocardiogram (ECG) to monitor her heart because her heart rate was low, Cross said.

Despite their interventions, Zoe’s condition continued to deteriorate and she died of kidney failure later that afternoon.

“They brought her into us and she's hooked up to all these machines and stuff. And then we were in there for like 30 seconds, all of us with her, and then everything was beeping and then the vet said, 'Actually, I’m so sorry, but her heart just stopped,’” Cross said, choking back tears.

Cross said they found out later that Zoe had likely died from blue-green algae poisoning because she had eaten pine cones coated in the bacteria.

“They could see something in her stomach and I guess it was the pine cone, but because the pine cone was so concentrated in this blue-green algae, it was just poisoning her,” she said.

The veterinarian told them that their puppy had every single symptom of blue-green algae poisoning that affects the kidneys, Cross said.

Ian Sandler, a Toronto-based veterinarian who founded Grey Wolf Animal Health and is a member of the national issues committee for the Canadian Veterinary Medical Association, said blue-green algae is a cyanobacteria that has been around for many years.

“It really thrives in primarily freshwater, and above 70 or 80 F (25 C),” he said. “The biggest problem, with climate change right now, is that we're seeing more and more blooms, if you will, these algae blooms, especially mid to late summer.”

Sandler said a blue-green algae bloom can appear slimy as it floats on the surface of the water, almost like “somebody has put fluorescent green paint in the water.”

While the bacteria is dangerous if ingested by humans and other animals too, Sandler said dogs are more likely to ingest more of it when they’re swimming or playing near water because they will drink the water and eat different objects.

“They'll eat things that may have algae on it, right? So they’ll pick up a stick, or something that may be floating,” he said.

For dog owners who suspect their pet might have come into contact with the bacteria, the Ontario SPCA and Humane Society has shared a list of signs of blue-green algae toxicity to watch for in dogs.

For Cross, she said the most shocking part for her was how quickly her puppy died after the initial onset of symptoms.

Sandler said the seriousness of the poisoning can depend on how much bacteria was ingested, the age of the dog, if they were on other medications, or if they had other concurrent illnesses.

“It’s usually very quick. It's not like a delayed onset,” he said.

Cross said she wanted to share her story so that other dog owners will be aware of the potential dangers of blue-green algae.

Sandler said the main thing pet owners can do is to prevent their dog from ingesting the bacteria by keeping them out of fresh bodies of water that appears dirty, foamy or have colour floating on the surface.

“Just absolutely ensure that there they keep them out of the water. There’s no reason for them to be swimming in the algae season,” he said.