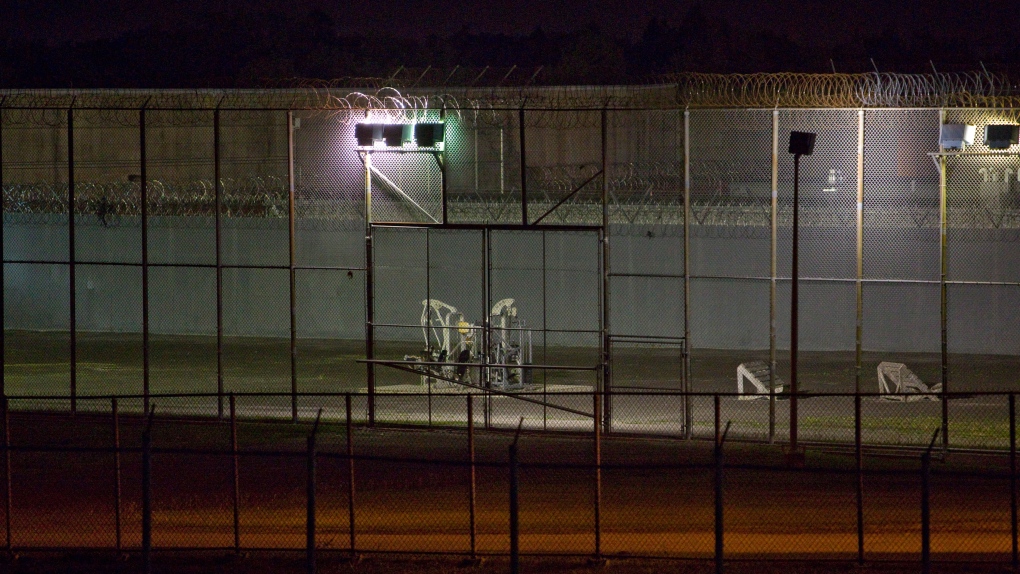 The prison yard of the Orsainville Detention Centre near Quebec City is shown on Saturday, June 7, 2014. (Francis Vachon / THE CANADIAN PRESS)

MONTREAL -- Interpol issued an international alert on Wednesday for the three prisoners who used a helicopter to make a bold getaway from a Quebec prison.

The organization said in a statement the request came from Interpol's Ottawa branch, which is run by the RCMP.

Interpol, which is based in Lyon, France, sent out what it calls an orange notice to law-enforcement agencies in 190 countries.

Such a notice warns of "an event, a person, an object or a process representing an imminent threat and danger to persons or property."

Yves Denis, Denis Lefebvre and Serge Pomerleau escaped from the Orsainville Detention Centre in suburban Quebec City on Saturday when a chopper landed in a courtyard, scooped them up and quickly took off.

Police say the three men were originally arrested on drug-trafficking and gangsterism charges in 2010.

The Quebec provincial police website also says Denis, 35, is facing first-degree murder charges, while Lefebvre, 53 and Pomerleau, 49, are facing charges of murder and conspiracy to murder.

News of the Interpol involvement came the same day as the Quebec government ordered an internal investigation into the aftermath of the escape because of contradictory information that has emerged since the breakout.

Premier Philippe Couillard said it has been impossible to get coherent information in a timely fashion and that the government is not satisfied.

"The first priority is to get those three persons back in jail again," Couillard told reporters in Quebec City. "This is what threatens citizens' security as we speak.

"Now, the government is not satisfied with the flow of information, the level of information and the coherence of the information that it has received from the various actors, and there are four of them in this situation. We want to go at the bottom of that situation."

The administrative probe will also look into events that followed a March 2013 helicopter escape, when two inmates latched onto a rope dropped from a chopper at the St-Jerome detention centre and were spirited away.

It is hoped the inquiry will shed light on communications between the office of the public security minister and the deputy minister, the province's detention centres, the Quebec provincial police and the Justice Department.

She also told reporters at the legislature that despite comments from Nav Canada, a deal does exist to prohibit air traffic over the detention centres.