Indigenous leaders should have keys to 100 Wellington, Metis leader says 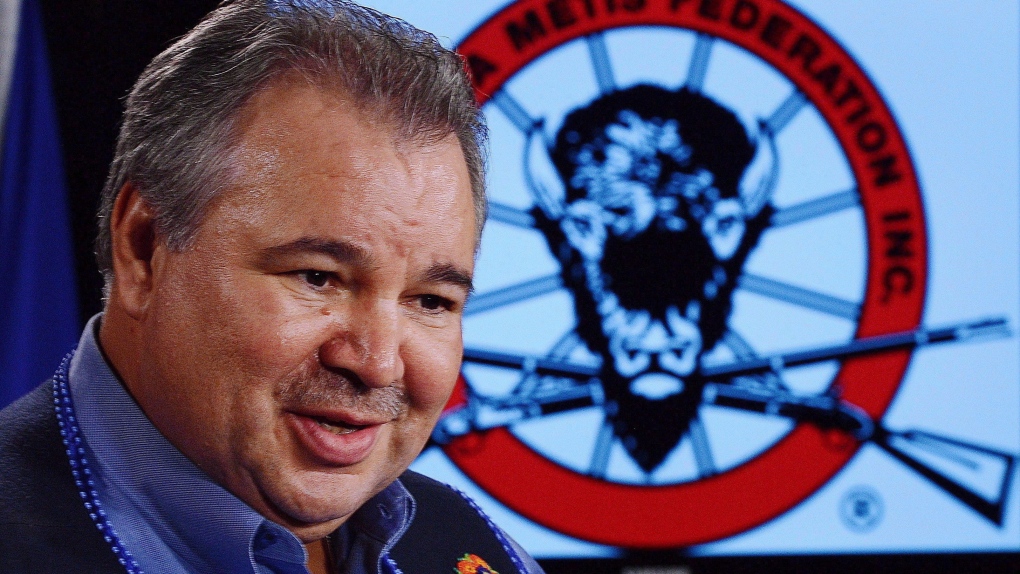 David Chartrand of the Manitoba Metis Federation takes part in a press conference on Parliament Hill in Ottawa on Friday March 8, 2013. A group of Metis citizens from Western Canada was left waiting in the cold as they sought approval from federal bureaucrats to enter an Ottawa building meant to be a space for Indigenous Peoples. THE CANADIAN PRESS/Sean Kilpatrick

OTTAWA -- A group of Metis citizens from Western Canada was left waiting in the cold as they sought approval from federal bureaucrats to enter an Ottawa building meant to be a space for Indigenous Peoples.

The group was in Ottawa last weekend for a ceremony marking the 150th anniversary of Manitoba joining confederation -- a milestone negotiated by Metis leader Louis Riel in 1870.

David Chartrand, vice-president of the Metis National Council, wanted to give his delegation a peek inside 100 Wellington St., the former U.S. embassy across from Parliament Hill.

The building has been vacant for two decades, but in 2017, Prime Minister Justin Trudeau said it would be dedicated to Indigenous Peoples in Canada.

Since then, representatives from the three main national Indigenous organizations -- the Assembly of First Nations, the Inuit Tapiriit Kanatami and the Metis National Council -- have been working with the government to make it a space that reflects their cultural and historical identities.

There are also plans for those organizations to have office and conference space inside the building, as well as areas for the public to tour. Much of that work has been completed, but the building has not yet officially opened.

Chartrand says the Metis space is ready to go and he wanted to show it to his visiting delegation, but he encountered roadblocks getting into the building.

He had to go to federal officials in Crown-Indigenous Relations Minister Carolyn Bennett's office to get permission for someone to come and unlock the doors. He emailed one person, who had to email another, going up the chain of command until they could finally get inside.

"It took time and the weather was not that nice outside ... some people left and said they'll come another day," Chartrand said.

"If it's our building, why don't we have keys?"

Leaders of the AFN, the ITK and the Metis National Council met last week in Ottawa to discuss the status of 100 Wellington St., and Chartrand says some of the discussions included expressions of frustration at a lack of Indigenous control over the building.

He believes Indigenous leaders shouldn't have to ask permission from federal bureaucrats to access the space, even if it hasn't officially opened yet.

That's why he says they're now going to ask for their own keys.

"We're concerned about the bureaucratic side of this, where the bureaucrats for some reason still believe that they still have say and control of what should be or what could be in there," Chartrand said.

"We do know there's going to be construction matters that are going to happen, and we understand that, but we want to have a say in it and we definitely want the ability -- it's our building, we should have a right to go in."

The future of the building and how to move forward with the project was flagged in a short list of "pressure issues" facing Trudeau after he was re-elected to office, according to documents contained his prime ministerial briefing binder.

The Canadian Press obtained the documents under the Access to Information Act.

The renovated building was on its way to being open last summer, but that plan stalled over calls from the Algonquin Nation to be included as a full and equal partner in the project.

Last summer, members of the Algonquin Anishinabeg Nation erected a birch-bark wigwam on the sidewalk in front of the building. Grand Chief Verna Polson staged a hunger strike, demanding equal space within the building located on unceded Algonquin territory.

The standoff lasted a little over 40 hours and ended with promises from Bennett's office to negotiate an agreement on a role for the Algonquin Nation.

Negotiations between the federal government and the Algonquin Anishinabeg Nation Tribal Council have been ongoing. The talks include a proposal to give the Algonquin Nation the empty lot beside the building as their own distinct space. But it remains unclear where things stand on these negotiations.

Attempts to reach Polson for comment on this story were unsuccessful.

According to the prime minister's briefing materials, which were heavily redacted, the government has "committed that any short-term occupancy of the Indigenous people's space will remain on hold until an agreement regarding its governance can be reached."

Bennett's office says federal officials are working together on a "short-term use" plan for the building while a longer-term design is completed, but did not comment on Chartrand's request for more immediate and direct access to the building.

The ITK declined comment on this story and the AFN was unable to provide a statement within the requested deadline.

Chartrand says his people are frustrated by the delays in the project, especially after lengthy negotiations among the three national Indigenous organizations over the last two years have been successful.

"There definitely is frustration, we did our due diligence and we're caught in this little pit stop," he said.

"One of the ways of moving forward is: give us the keys. Give us the keys to our building so we can actually start working at it and let's open these doors."