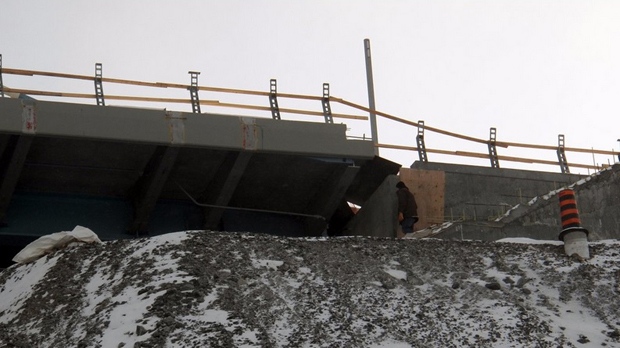 A man inspects the area where two portions of the Nipigon River Bridge split on Sunday afternoon. (Twitter/@aholyghost1)

TORONTO -- Ontario's government is promising an update early next week on the next steps to reopen a second lane on the Nipigon River Bridge following a failure of the cable-stayed structure, which connects east and west travel in the province's north.

"I anticipate that we'll have an update with respect to what I'm calling the next interim fix because obviously we want to get both lanes reopened on the bridge as soon as possible, but as soon as possible safely," Transportation Minister Steven Del Duca said Friday.

"I don't know timelines because it is too early to speculate at this point exactly what that fix will look like, but we are focused on understanding why it happened, getting accurate information and analysis done around that, and getting the bridge reopened."

The bridge, which is part of the Trans-Canada highway, was closed for about 24 hours starting Sunday afternoon after part of the steel decking separated and rose about 60 centimetres.

Daily, about 1,300 trucks cross the bridge, carrying about $100 million worth of goods.

Ministry of Transportation staff used more than 100 large cement blocks as counterweights to lower the bridge surface so they could reopen one lane of traffic on Monday. Oversized trucks weighing more than 63,500 kilograms are still being assessed on a case-by-case basis to see if they can cross the bridge or have to take a lengthy detour through the United States.

Del Duca also announced Friday that two independent testing facilities have been hired to find out what led to the bridge failure.

The National Research Council of Canada and Surface Science Western at Western University will start tests Monday to determine what caused bolts holding the bridge cables to fail, allowing the steel decking to separate and rise up.

"Two labs have been retained to look at some of the materials, the bolts in particular that people have heard about," said Del Duca. "We'll get a report back on that."

Del Duca cautioned people about speculating on the cause of the bridge failure -- "even though I know it's fun to do sometimes" -- until Ministry of Transportation engineers figure out what really happened and why.

"We're doing the analysis, we're taking a look at that, and we will come forward with updates and solutions as we have them ready," he said.

Premier Kathleen Wynne said earlier this week that it was too early to start blaming the contractor for the problems with Nipigon Bridge, and urged people to "take a breath" while engineers determine what went wrong.

The $106-million Nipigon River Bridge opened the first two lanes about two months ago, but the four-lane bridge project isn't scheduled to be completed until next year.

Wynne vowed the province will get to the bottom of what happened last Sunday, fix it, and make sure it doesn't happen again.