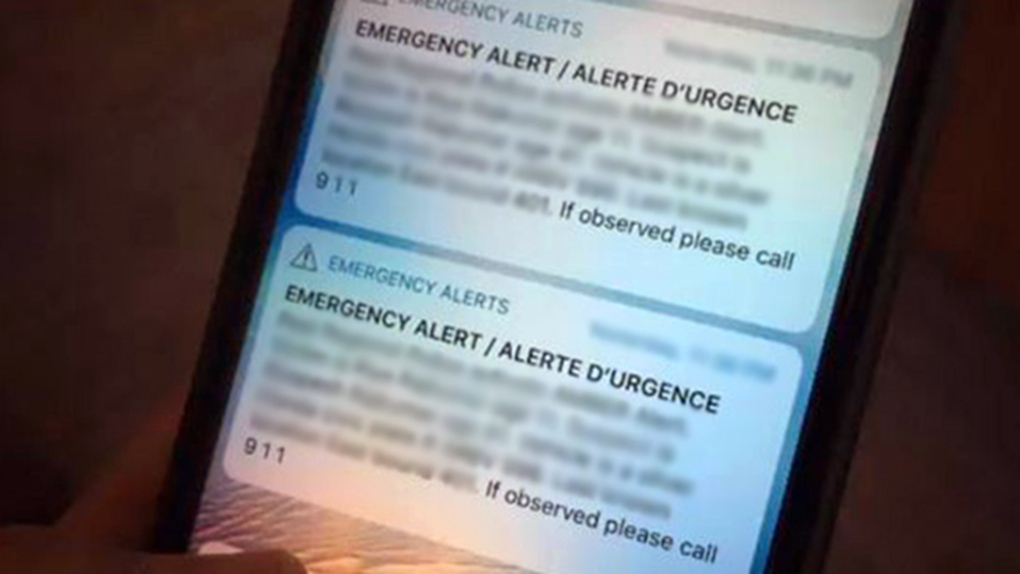 An Amber Alert is activated in this undated file image.

York University professor Kenneth McBey pointed to two features of the system that in his view risk training people to ignore alerts: sending them to every phone in the province, and sending them potentially at any hour of the day or night.

“If you irritate people unnecessarily, do it in various formats where they turn against it or somehow aren’t open to the message and won’t comply, it’s not working in anyone’s best interests,” he told CTVNews.ca.

McBey is an expert on disaster and emergency management.

He suggested issuing alerts at night only to people whose phones have been moving, which implies that they are awake, and sending the alert to everybody else when their phones start moving.

“If it hasn't moved in hours, and you're not close to (the abduction), it really is a bit of a reach as to why those individuals need an audio audible alarm,” he said. “Text? Yes. You can check in the morning.”

Another change could involve issuing alerts only to areas of the province where a child’s abductor could plausibly have driven to, given the time since the abduction.

One problem with tracking phone movement, however, is that it risks a different kind of pushback -- this time based on privacy, said University of Toronto computer science professor Cosmin Munteanu.

However, he said that at some point the alerts lose value.

“At some point, I'm going to start tuning them out. And when I hear something that's relevant to my area, I may not pay attention at all: ‘There's another child abduction, there's nothing I can do, all of them are out of out of my area.’”

On the other hand, he conceded, the rate of child abductions is something the police have no control over.

Police do have the ability to restrict Amber Alerts to a region of Ontario, but broadcast them to the whole province because a motivated abductor can travel a long distance in a short time, Ontario Provincial Police Insp. Stacey Whaley explained.

He pointed to a 2020 case where a child was abducted in Sudbury and found in Toronto “before most people knew that there was an Amber Alert.”

“It doesn't take long, even though we are a big province,” he said.

“I can tell you as the Amber Alert coordinator for the province that I don't want to be the guy to make a decision that a child was abducted in Simcoe County, and located in Kenora or Thunder Bay, 12 or 14 hours later, and that they could have helped but didn’t know about it because they weren’t part of the alert.”

“I wouldn’t want to have to look at a parent and say ‘Yeah, we could have included Thunder Bay and Kenora, but we didn’t because we didn’t think they would get that far.’”

One problem, he explained, is that in a dispute between estranged parents, police need to investigate before agreeing that an abduction has happened, which adds time for the abductor to travel.

“If you're with your child at a playground and a van pulls up and a stranger comes out in a mask and grabs the child and pulls him into the van and drives away, there’s not a lot of investigating going on there,” he said. ”The Amber Alert is going to go out right away. But when it’s custodial in nature it sometimes does require more investigation.”

Unlike the United States, Canada chose to make the alerts mandatory. But with that, McBey argued, comes the risk of overusing them.

“We don’t want to alienate people. I fully support the approach to making these required, so you can’t opt out of them. That’s pretty important. But we do have to be concerned about individuals, their own lives, we want them not to be, pardon the language, pissed off at the situation by unnecessarily alarming them when there isn’t anything they can do about it.”

“They figure: Why was I contacted? I’m not in the close geographic area. What am I going to do? I’m at home, I was sleeping, and I’ve been immobile for several hours.”

But Whaley rejected the idea that the alerts are overused.

“We had one in 2018. We had seven or eight in 2019. We had four last year, we had one this year. These things aren’t going off every week. Four a year – is that unreasonable, when you’re talking about the life of a child? I would say: absolutely not. We make no apologies for that at all.”

As well, Whaley said, one of the many people who gets the alert can be the actual abductor. The experience of seeing a provincewide alert with their vehicle description and licence plate is often enough to end the abduction.

“There have been cases where the abductor will say, ‘Oh, my gosh, I saw I saw that on the news,’ and return the child, or say there was a big misunderstanding - or that’s what they allege - so I brought the child back,” he says. “It has had that effect.”

Munteanu compared the current system to a Cold War-era air raid siren: it doesn’t have much nuance as a way of communicating, but it’s simple and gets everyone’s attention.

“In a way, it's not any different. It's a broadcast message that’s simple that goes to everyone.”

“There is a power in simplicity.”

For his part, however, McBey would like to see a much more sophisticated alert system, using features that already exist in our devices. For example, drivers on a highway going in one direction in a specific area could have an alert tailored for them to look for a certain vehicle.

“Those capabilities are there, location-wise, GPS-wise. Whether your phone is active, whether location is enabled. If you’re on the 401 west, between Winston Churchill and Guelph Line, this is what we want you to do.”

“I don't see why that couldn't be done.”