'I want to reclaim my stolen education': Day School survivor's fight to learn

In a world filled with written words, not being able to read them can be terrifying.

For Linda Jack, an Indigenous elder, it's also isolating and overwhelming.

"I can't read or write," Jack said. "When I walk down the street, go into stores and all that stuff, it's pretty hard for me."

Jack is a Cowichan elder, living on the traditional territory of the Snuneymuxw First Nation.

When she was a child, she was forced to attend St. Catherine's Day School in Duncan, B.C.

"They didn't help me learn at all. I felt like I was just tossed around from class to class with no one caring about my education."

St. Catherine's was one of Canada's 699 federally operated Indian Day Schools. They were established in 1920 and it's estimated close to 200,000 First Nations, Inuit and Metis attended.

Like residential schools, day schools stripped Indigenous children of their culture and heritage.

Jack said when she was caught speaking her traditional language she was severely punished. "They pulled out some of my teeth after catching me talk in my own language."

Along with physical assaults, Jack said there was sexual abuse at the school she went to.

"I tried to commit suicide when I was growing up, like I must have been nine or 10 when I landed in the hospital," Jack said while holding back tears. "Because all of that sexual abuse that was happening to me. It was really hard on me."

On its own website, Crown-Indigenous Relations and Northern Affairs Canada says many students who attended the schools "experienced trauma" and, in some cases, "abuse at the hands of persons entrusted with their care."

In addition to the pain she suffered at school, Jack had trouble at home.

Her father was also abused while attending the Kuper Island Residential School.

According to the National Centre for Truth and Reconciliation, it was a place of "many tragedies during its decades-long existence." One-hundred-and-twenty-one students are confirmed to have died at the school, which was founded by the Catholic Church.

"My late dad went through a rough life going to that school," she said. "He also couldn't read, became an alcoholic and was abusive to us kids."

Jack's entire family has a legacy of trauma linked to both day and residential schools. It's a cycle her son, Richard Charlie, has struggled to break. 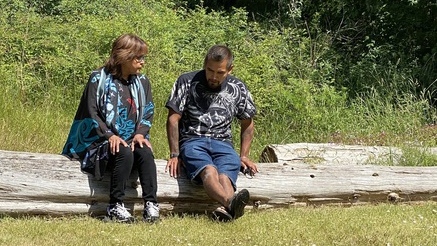 The 35-year-old said his mother's lack of literacy meant she was never able to read him a story or follow a recipe to make him cookies.

"She couldn't do the simple things that many people take for granted. She wouldn't even take us to a new park since she couldn't read the signs and was afraid we would get lost."

Charlie admits he also had a tough time in school because there was no one who could help him with his homework. He didn't graduate until he was in his late 20s.

"Some days I feel like life is so tough, but then I look at my mom and I can't even imagine having to overcome that stuff," he said.

When it comes to adversity, however, Jack is resilient.

"I got goals. I believe in myself. I know what I want and don't want in my life today."

After years struggling with her own substance abuse, Jack is now sober. She is also determined to reclaim what she calls a stolen education.

"I feel that I got robbed big time," she said. "No education, no job and with that I couldn't do anything for a lot of years."

A class-action lawsuit, launched on behalf of Federal Indian Day School survivors, was settled in 2019.

It offered a minimum of $10,000 in individual compensation for harms associated with attending the schools.

Jack would like to use some of those funds to establish a permanent learning group for Indigenous elders.

"I'm not the only one who can't read," she said. "We want to start a class from Monday to Thursday for four hours a day so that all the elders in our community can learn."

With the help of some good friends, like Doug Savory, Jack is hoping to launch the program this year.

"Linda has lived a life worse than our worst nightmares, yet she has not given up," said Savory. "They could not break her and thoughts of her future bring such radiant happiness."

The group for looking for volunteer teachers and any books that can be used to help people learn to read and write.

"I want to make sure that by next year I can learn to read a little more," said Jack. "I also want to do this for my people, those also struggling to read and write. We all deserve a proper education."