'I can do great things': Toronto refugees and asylum seekers want voices heard 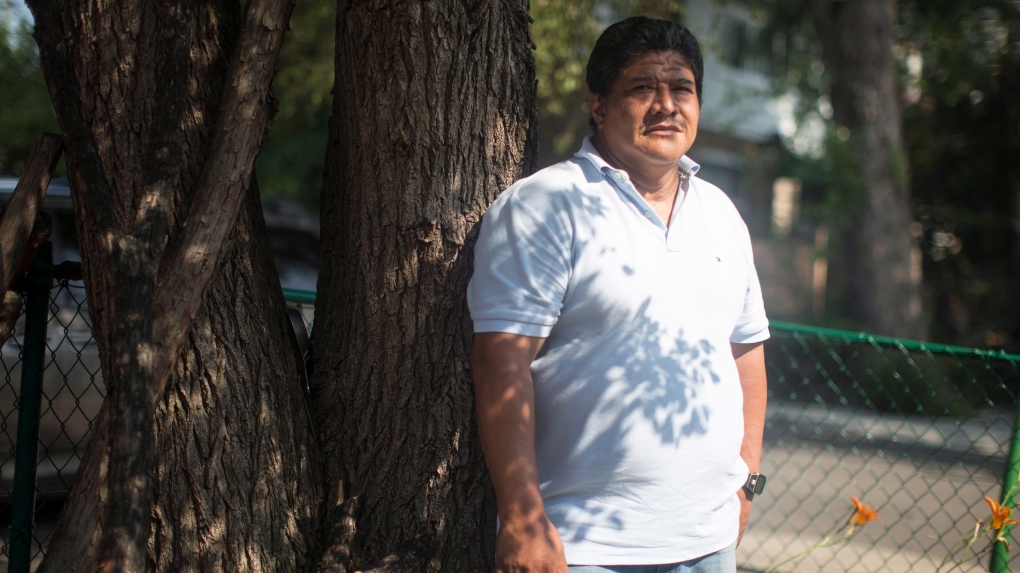 Carlos Zuniga, 52, a doctor who fled El Salvador with his wife and two sons, is pictured at the FCJ Refugee Centre in Toronto on Tuesday July 10, 2018. THE CANADIAN PRESS/Chris Young

TORONTO -- Inside a large brick home in midtown Toronto, people pore over documents needed to file refugee claims, discuss the legal aid system, and work through the challenges of finding housing.

The FCJ Refugee Centre is a place where those who've been accepted as refugees help others seeking asylum deal with all sorts of practical issues. It's also an environment where people can share why they came to Canada and their hopes for the future -- narratives many at the centre feel are important to larger conversations about refugees and asylum seekers.

One of them is Dennis, a 21-year-old who came to Toronto from an East African country in January 2017. He doesn't provide his full name because of concerns about safety and the status of his refugee claim -- he says he's waiting for a hearing. But he wants to talk.

"Refugees don't come because of the money (in social assistance) the government gives them. They come to seek protection," he says. "My father, who protected us, was slaughtered in front of me. I made the decision to leave."

Dennis says he flew to Toronto in the middle of winter with two T-shirts and two pairs of pants. When he went through the airport doors the sight of snow made him turn around.

"I was frozen immediately," he says. "I went back inside and slept there that night."

He asked travellers for help and one lent him a phone to call a shelter. He spent his only money on a taxi to the facility but it was full. Staff gave him a jacket and found a spot for him at another shelter where he lived for 13 months.

While Dennis has now found housing, asylum seekers like him are adding to Toronto's already overwhelmed shelter system -- the city says there were 3,221 refugee claimants in the system as of mid July, close to half its users. Some of those asylum seekers have been housed in college dormitories and hotels.

Ottawa has promised $11 million to help with the situation while Ontario's new Progressive Conservative premier, Doug Ford, has said the federal government should cover the entire cost of resettling asylum seekers because its policies were encouraging people to cross into Canada illegally.

The act of crossing the border at a point other than an official port of entry is illegal. However, according to the federal Customs Act, those seeking asylum in Canada have that right to do so under the United Nations 1951 Refugee Convention.

Amid the political sniping, the housing issue in Toronto is getting worse, says Loly Rico, co-director of FCJ.

"There is a lot of discrimination by landlords. They want three, sometimes four months rent up front," she says. "Many of them don't want refugees."

Her organization -- along with others -- helps people deal with problematic landlords. They also have several houses for emergency shelter. And there's a network of neighbours offering up rooms.

Dennis eventually found a basement apartment with a roommate but needed Rico to be his guarantor.

As he waits for a hearing on his claim, he lives in a state of limbo. He has a work permit and is looking for employment but what he really wants to do is go to university. That's not possible until he gains refugee status.

"I want to be an emergency surgeon. I want to give back to society. That's all I want," he says.

Juan Gomez wants to give back, too.

In December 2016, the 29-year-old fled Bogota, Colombia, after threats against him and his family, including his eight-month-old daughter. Problems began when he exposed government corruption as he worked for the opposition in the senate, he says.

He says he flew to New York but lawyers advised him to go to Canada because of the uncertainty surrounding incoming President Donald Trump. So he went to Windsor, Ont.

He then came to Toronto and found the FCJ. He became adept at navigating the complex system for newcomers and volunteered to help others find housing, file claims and apply for social assistance.

He learned English by working at Starbucks and recently started a job at an environmental organization.

"The solidarity I have found in Canada is the solidarity I'd like to give back," he says. "But I'm worried that the new provincial government will not show solidarity to refugees."

She says she came to Canada from Kenya in 2014 after spending the early part of her life in Somalia. The memories of her time there are traumatic.

"I have flashbacks and I cannot control the tears, but I'm working hard at the process," she says.

She came to Toronto at 18 with her twin sister and three younger brothers. Child services split the family up and she spent time at a shelter downtown, she says. It took more than two years of dealing with the courts to get guardianship of her brothers, she says, noting that the FCJ helped her get through tough times.

"I came here and they showed me what love is," she says, wiping away tears. "They showed me how to trust people and to be patient."

She's now fluent in English, having it learned it by watching movies -- "The Lion King" is among her favourites -- and reading children's books. In the fall, she'll begin a dental assistant program.

Her life is on track but she says she worries about the current narrative around asylum seekers.

"There is a change in what some politicians think," she says, adding she wants legislators to talk to refugees like her.

"I want the politicians to know one thing," she says with a smile. "I can do great things."