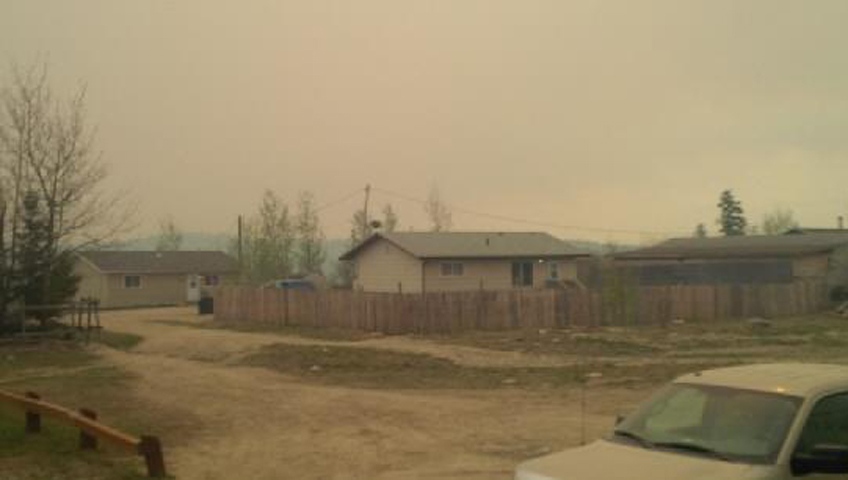 A thick cloud of smoke hangs over Stanley Mission, Sask. on Saturday, May 24, 2014. (Tammy Cook-Searson)

Around 900 residents have been evacuated from a northern Saskatchewan First Nations community, as a massive forest fire threatens to cut off the only road out of town.

While flames have not touched Stanley Mission yet -- officials say the fire is about five to 10 kilometres away -- a general evacuation order was issued on Saturday.

Approximately 600 residents are still in Stanley Mission, but hundreds have already left, many of them fleeing to Saskatoon.

"It's kind of scary because of all the smoke," one resident told CTV Saskatoon on Sunday.

On Saturday night and Sunday morning, about 500 people were forced from their homes, as crews focused on protecting the lone road out of town.

Parts of the region have been blanketed by a thick cloud of ash from the fire which has grown considerably since Saturday when it covered an area of 1,600 hectares. By Sunday, the forest fire's footprint had nearly tripled in size, covering an estimated area of 5,000 hectares.

"We have fire crews, helicopters and an incident command team is managing this fire, and our air tankers are also working this fire out of (the northern Saskatchewan town of) La Ronge," Steve Roberts, executive director of the Provincial Wildfire Centre, told CTV Saskatoon in a telephone interview on Sunday.

Officials say the winds, combined with the hot and dry conditions, have made it difficult for crews to extinguish the blaze.

"This fire is active because we have a continued band of hot and dry weather and shifting winds in that area and currently no precipitation…expected in the next 24 to 36 hours," Roberts said.

Saskatchewan isn’t the only place facing wildfire problems. Wildfires ripped through parts of California last week, and Alaska is now facing a wildfire crisis. Firefighters from British Columbia and the Yukon have been dispatched to help control the Alaska fires.

With a report from CTV Saskatoon's John Baglieri