A month before she was arrested in Vancouver, Huawei Technologies executive Meng Wanzhou wanted to resign and find another job, her father and the company’s founder has revealed in an exclusive interview with CTV News.

“She was not happy working here but after being arrested, this matter improved our relationship and now she understands how difficult life can be,” Ren Zhengfei told CTV News Chief Anchor and Senior Editor Lisa LaFlamme in a rare, two-hour interview at Huawei’s headquarters in Shenzhen, China.

The famously private Ren, 74, also defended his company and his own legacy, dismissing U.S. allegations of corruption and spying on behalf of the Chinese government as a reaction to Huawei’s global success.

Meng, Huawei’s chief financial officer and deputy chairwoman, was arrested at the Vancouver airport last December at the request of American authorities. She is wanted in the United States on fraud charges related to allegations she misled banks about the company's business dealings in Iran.

Meng is under house arrest in Vancouver as her case makes its way through the courts system. The Chinese government has slammed the arrest and Canada’s decision to proceed with the extradition case as politically motivated.

In his conversation with LaFlamme through a translator, Ren said his daughter has “committed no crime,” but her arrest will not impact his company’s relationship with Canada.

“We will not reduce our investment in Canada because of that,” he said. “Meng Wanzhou is an individual case and I don't think it should influence in any way the relationship Canada has with Huawei.”

Ren’s own relationship with his daughter has improved significantly since her arrest, he noted.

“In the past we seldom exchanged phone calls. Once a year we exchanged pleasantries because we were all busy but now, every other day we have phone calls,” he said. “We shoot the breeze, tell jokes, I tell her some anecdote I’ve read on the Internet.  The case in Canada made my bonds deeper with my daughter.”

Ren also sees Canada as a “victim” of the U.S. allegations against Meng and his company.

“(Meng) didn't violate any Canadian rules and I think both Canada and Huawei are victims because this case hurts people in both countries and bilateral relations also suffered setbacks,” he said.

Ren said he supports his daughter’s civil claim against the RCMP, Canada Border Services Agency and the federal government, alleging that her constitutional rights were breached when she was detained.

“I support her using legal action to defend her rights.” 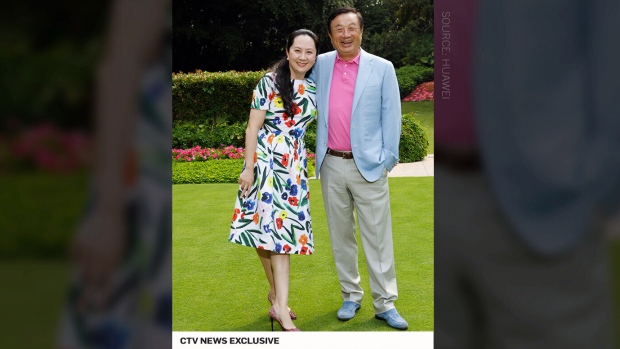 Asked whether Canadians who have been detained in China in recent months should be given the same right to sue their captors, Ren replied: “This is an issue between the two governments. I don’t represent the government so it’s not something I can say.”

Two Canadians were accused of acting together to steal state secrets in China and their detentions were widely seen as an attempt to pressure Canada to release Meng.

The extradition case has also strained the trade and diplomatic relationships between the two countries.

The U.S. government is also targeting Huawei on another front, with accusations of spying for the Chinese government. U.S. officials have repeatedly labelled Huawei products as a security risk, but Ren said he’s not worried that will be detrimental to his business empire.

“No I don't worry,” he told LaFlamme. “We will only do better because they have made big publicity for us. In fact we are just a small company. There is nothing particularly special about us but our strong rival makes us also look big so we have become more popular.”

Ren denied that his company is under Beijing’s thumb, and said the U.S. accusations have made Huawei a “hot topic” around the world.

“I think should have paid them for the advertising campaign because Huawei has never been so famous in the world. They are advocating and advertising for us,” he said.

He said Huawei does not “have the motivation” to spy for the government.

“And secondly our government has been clear, this is not something we do.”

Ren founded Huawei in 1987 with $3,500. The company now has 180,000 global employees and produces 240,000 smartphones a day at the high-tech facilities in Shenzhen. Last year, Huawei’s sales surpassed those of California-based Apple.

But even though the past few months have drawn him closer to his daughter, Ren said he has no current plans to make Meng his successor.

“You have to suffer a lot before becoming a hero and if you don't have scars, you won't have tough skin, so the political suffering for her is a big test for her. Her wings will become stronger, she will achieve more,” he said.

“She has always been a manager and a manager is good at managing a wide span of issues. But for a leader, you need to have a strong vertical ability; you need to be able to see things happening in 10 or 20 years. This ability to observe the future has to have a technical background -- without that, you won’t be able to foresee things that will happen in the future. She won’t be a successor because she doesn’t have this background.”

Behind the scenes at Huawei HQ