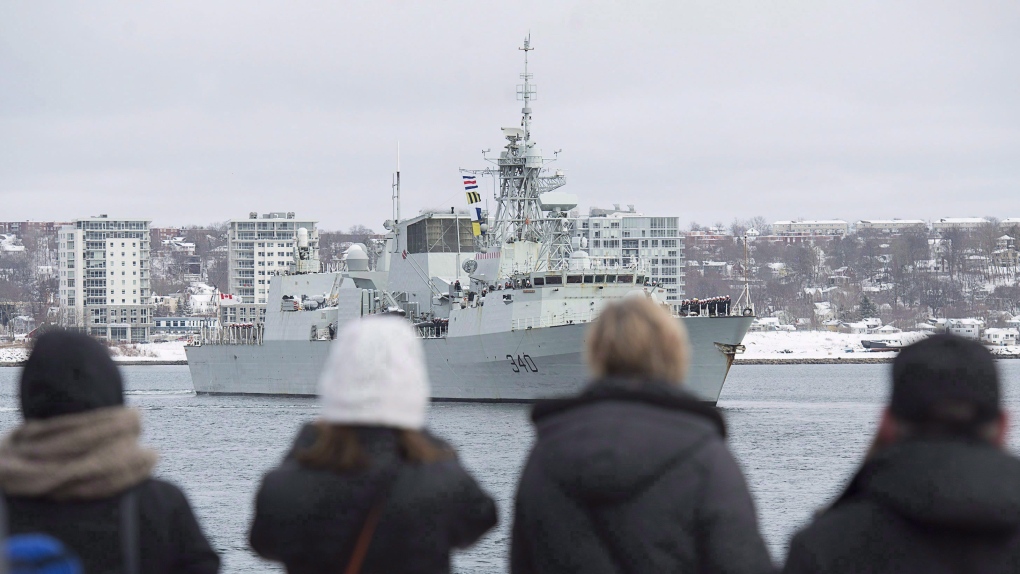 HALIFAX -- Hundreds of family members and friends lined a Halifax jetty on Monday as HMCS St. John's and its 240-member crew pulled into their home port following a six-month mission overseas.

The Halifax-class frigate cut through the fog at about 9 a.m., pulling alongside a dock as a Royal Canadian Navy band played and more than 200 people waited to greet the returning sailors.

The ship, along with a CH-124 Sea King helicopter, were participating in exercises in the Baltic Sea, northern Atlantic Ocean and the Mediterranean Sea.

The return concludes the ship's participation in an ongoing mission called Operation Reassurance, which is aimed at reinforcing NATO's defences in the face of Russian aggression.

Cmdr. Gord Noseworthy, the frigate's commanding officer, issued a statement saying the ship had travelled more than 75,000 kilometres -- from as far south as the North African coast to as far north as the High Arctic off Norway.

"Now that we are at the end of the deployment, we are looking forward to reuniting with our family and friends after a long time away from home," Noseworthy said.

The ship left Halifax on Jan. 16, marking the navy's eighth rotation in the mission, and the second such deployment within a year for HMCS St. John's.

It also marks one of the last scheduled deployments for the Sea King helicopter fleet on the East Coast after 54 years of service.

The Defence Department issued a statement saying members of the air detachment aboard HMCS St. John's will return to 443 Maritime Helicopter Squadron in Patricia Bay, B.C., where they will continue flying the remaining Sea Kings on the west coast until the end of this year.

On board was a CH-148 Cyclone, marking the first international deployment of the Canadian military's new fleet of maritime helicopters.

"Working alongside our NATO allies and partners in the Euro-Atlantic, they were outstanding ambassadors of Canada and the Royal Canadian Navy," he said.

During the mission, the ship's crew worked closely with 12 navies and visited 11 ports in eight countries.