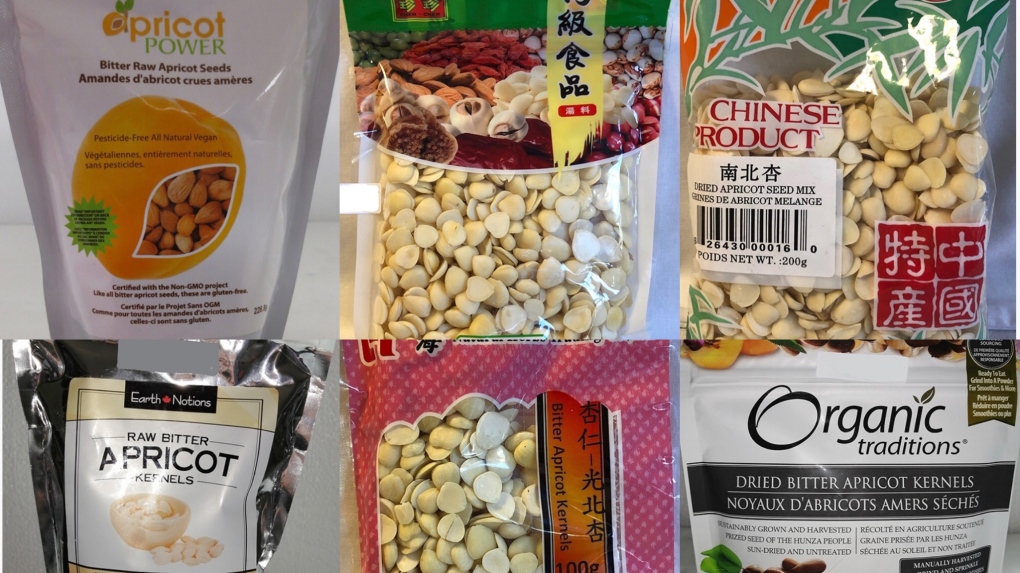 Some of the apricot kernel products being recalled by the CFIA

TORONTO -- An expanding recall on apricot kernels is renewing focus on how the seeds can cause acute cyanide poisoning.

The Canadian Food Inspection Agency has recalled 10 apricot kernel products over the past two weeks. If you have any of the recalled items, the CFIA is advising you to return the products to the retailer or dispose of them.

Apricot kernels are the seeds found in the pit of the fruit. They have a nutty flavour and can be sold in various forms, including ground-up in food or beverages.

“Pits or seeds of many different fruits, such as apricots, apples, peaches, plums and cherries, contain a naturally-occurring compound named amygdalin,” Elyse Caron-Beaudoin, assistant professor in environmental health at the Department of Health and Society at the University of Toronto Scarborough, told CTVNews.ca in an email on Thursday.

When our bodies break down amygdalin, it turns into cyanide as a result of a chemical reaction, she added.

Once amygdalin makes its way to our intestines and goes through the process of digestion, it releases hydrogen cyanide.

“Hydrogen cyanide is actually naturally produced in mammals, including humans, but it can be highly toxic at high concentrations,” she said.

“One example of normal processes leading to the production of hydrogen cyanide includes some of our immune cells, namely leukocytes, who produce hydrogen cyanide when they ingest bacteria and other pathogens in order to kill them,” she said.

According to Health Canada, human bodies can tolerate and detoxify small amounts of cyanide, but large amounts in a short period can be dangerous.

“An excess of amygdalin would come from diet, such as consuming too many apricot (or other fruits containing amygdalin) kernels and seeds,” said Caron-Beaudoin.

As of Jan. 25, 2020, Health Canada allows for 20 parts per million of extractable cyanide in apricot kernel products sold as food.

Don’t toss your produce yet. It is still safe to eat apricots and other fruits whose pits and seeds contain amygdalin.

“Those fruits do not contain cyanide,” said Caron-Beaudoin.