A thunderstorm drenched Calgary with heavy rain Friday evening, flooding some neighbourhoods, after the city overcame huge obstacles to push ahead with the annual Calgary Exhibition and Stampede.

More rain was expected overnight, and the City of Calgary Water Services was monitoring river flows.

Images sent to CTV News showed a road in the city’s Sunnyside neighbourhood under water.

Just over two weeks ago, the Bow River breached its banks and sent floodwaters pouring into the downtown area.

But on Friday morning, after a massive effort to get the city ready, the annual Stampede kicked off with a huge parade through areas that were recently submerged.

Newly retired Canadian astronaut Chris Hadfield, marshal of Friday's parade, rode a white horse named Jag, and tweeted a picture with the caption: "One horsepower - Jag and I are ready to ride!"

"The fact this parade is even taking off today speaks to the resiliency of the people of this city. This parade route a week ago, parts of it were literally under water and here we are today getting ready for the start of the 2013 edition of the Calgary Exhibition and Stampede," said CTV Calgary's Bill Marks, reporting from the parade grounds.

The cleanup is far from complete in Calgary and in other southern Alberta communities hard hit by the torrential rains that caused rivers and streams to burst their banks beginning June 20. In Calgary alone, 75,000 people were evacuated from their homes.

In High River, where some of the worst damage took place, 13,000 were evacuated -- many of them only allowed to return home in the last few days.

Due to safety concerns, others have not yet been allowed to go home and will remain in temporary housing until they get the go-ahead.

After a couple of tough weeks, many are ready to trade their rubber boots for cowboy boots, and to celebrate, Marks said.

"People are optimistic, people are happy, people want a chance to celebrate and that's exactly what they're going to do," Marks said. "They were out last night putting out chairs, reserving their places for today's routes, families that have been here for decades made sure they were out here again today to show their support."

The parade and the entire Stampede will pay tribute to first responders who risked their lives to help those in need during the flood crisis.

"We couldn't be more proud to celebrate our first responders and everyone who was on the ground doing such a great job rebuilding our city, so we're very happy and proud to honour them," said Jennifer Booth, publicity manager for the Calgary Stampede.

Though some events had to be relocated -- partly due to the fact the Saddledome was badly damaged by flooding -- and some concerts had to be cancelled, organizers made it their mission to provide a full Stampede experience this year, despite the challenges.

Even Booth admitted she wondered at points whether that would be possible.

"When everything was at its peak, I remember standing on the hill and overlooking Stampede Park and being a born and raised Calgarian it was pretty devastating, it was extremely emotional. You're looking at the park, completely under water, and wondering 'oh my gosh, how can this go on?'

"And it was the positivity of all of our employees and the community as a whole saying 'no, the show must go on, you're the Calgary Stampede.' So we're doing this for the community."

Even Calgary Mayor Naheed Nenshi has donned one of the popular black "hell or high water" Stampede shirts seen across the city, worn by supporters of the event.

On Thursday, Nenshi called Calgary a community "that's stronger than it's ever been."

"Symbolically... us saying we're no longer in an emergency is a really big thing," said Nenshi. "For people to say, 'Alright, I can take a breath. It's not wrong for me to take a day off and enjoy the Stampede.'

"While we're working hard with our neighbours, we can take a day off to celebrate what makes the city great."

Marks said Friday's parade will follow a four-and-a-half kilometre route, kicking off at around 9 a.m. local time. It is expected to attract 500,000 spectators, and will include 750 horses, 3,000 participants and 167 parade entries from North America and around the world.

"One of the most important stats, those animals, they're going to deposit about two tons of manure during the route of this parade today so the street sweepers are going to be pretty busy here in downtown Calgary," Marks said.

With files from Andy Johnson 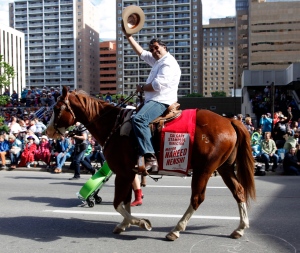 Calgary Stampede kicks off with huge parade through city