Hate crimes down in Canada, but Muslims more frequently targeted 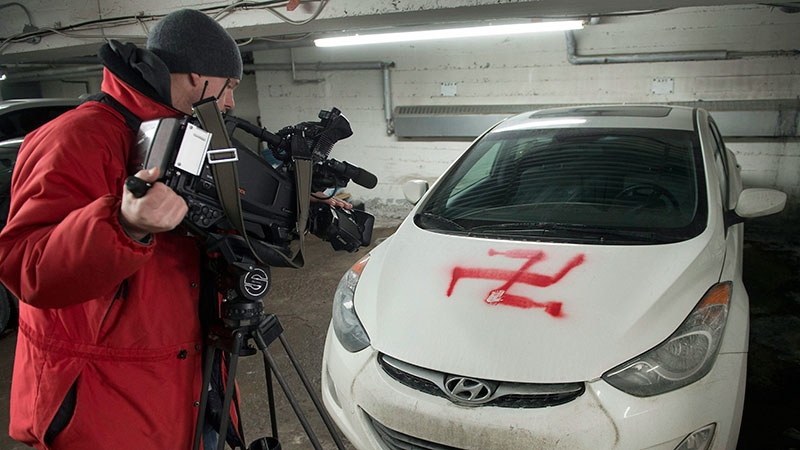 A cameraman shoots a swastika painted on one of several cars, in Montreal, Tuesday, Feb. 24, 2015. (Ryan Remiorz / THE CANADIAN PRESS)

There were 17 per cent fewer hate crime incidents reported to police in Canada in 2013 compared with 2012, Statistics Canada reports. But the numbers also reveal that black populations are still the most frequently targeted in hate crimes, and crimes against Muslims rose last year.

Statistics Canada says a total of 1,167 hate crimes were reported to police in 2013. The majority are considered non-violent, “mischief” crimes, such as vandalism, graffiti and other forms of property destruction,

Although the number of hate crimes reported by police declined in 2013, some aspects remained constant. Black populations, for example, were still the most frequently targeted, making up 22 per cent of all hate crimes.

Hate crime data have been collected on an annual basis since 2006. Statistics Canada says the numbers presented in this study likely underestimate the true extent of hate crime in Canada, as not all crimes are reported to police.

In fact, it’s estimated that only about one-third of incidents are ever reported to authorities.