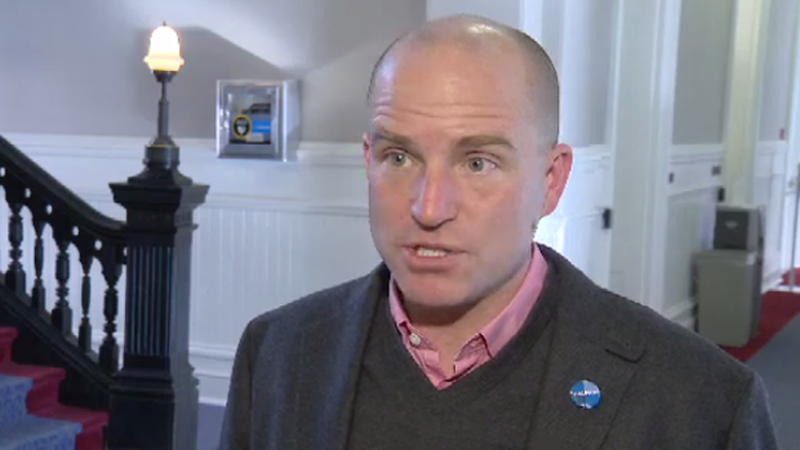 A Halifax city councillor is being criticized for retweeting a letter from a Canadian group accused of being a white supremacist organization.

HALIFAX -- A Halifax city councillor under fire for retweeting a Canadian "ethno-nationalist" group has dismissed criticisms, even as official complaints poured into city hall Friday.

"The attacks on me are political," Coun. Matt Whitman tweeted.

On Thursday, Whitman had retweeted a letter addressed to Mayor Mike Savage and regional council from ID Canada, a self-described "ethno-nationalist" group created as "a response to Canada's decaying identity, increased third-world immigration and the prevalence of anti-European sentiments."

The document was critical of the municipality's decision to take down a statue of Halifax's controversial founder, Edward Cornwallis, and place it in storage while council determines its long-term fate.

By Friday, the city said it had received 21 complaints about councillors in the last 24 hours, though it could not disclose who they were lodged against.

Whitman accused the media of being "reckless again" in its coverage, and said in his tweet Friday he won't tolerate racism.

The one-page ID Canada letter said the statue's removal represented "an egregious affront to our past" and a "brutal disregard toward the accomplishments of Canada's European founders."

Another councillor, Deputy Mayor Waye Mason, said he was stunned when he saw the retweet after someone pointed it out to him Thursday afternoon.

"I looked at it and went, 'Holy crap -- this is racist stuff,"' he said Friday. "This isn't a political thing... no man, you retweeted white supremacy, full stop."

He immediately took to Twitter to scold Whitman for retweeting the letter from the group, which on its website promotes the idea that, "Canada is a nation of European values, traditions, customs and culture. Canada was never meant to be a melting pot of third-world migration."

"You are retweeting a neo-nazi hate group. I am speechless. What the hell is wrong with you?" tweeted Mason.

Whitman acknowledged that he didn't have time to look into the group before retweeting it, saying, "I don't background check every tweet I see." He said he has deleted the retweet and blocked the group.

He did, however, update his Twitter profile to say, "Tweets, Likes and Retweets are NOT necessarily endorsements so relax, move on...Next."

On Friday, Whitman added that when he was Halifax's deputy mayor he would never have acted as Mason did Thursday: "Waye is a smart guy. An ambitious guy."

Many on Twitter called for Whitman to step down.

"You should really resign from being councillor of our community," one woman tweeted. "You should not be in this position."

Another said: "In one day, you've managed to degrade the actions of the mayor, mocked the lyric change to the national anthem, and retweeted a white supremacy Twitter account. All of this before the end of rush hour."

Mayor Mike Savage said councillors must be responsible for things they tweet or retweet.

"(Whitman) retweeted something that was vile. He's indicated that when he found out about it, he deleted it," he said. "He's still responsible for it, I hope he understands that."

Savage added: "We can't absolve ourselves of responsibility. We need to do better."

The matter could be addressed by council if formal complaints are filed by the public or fellow councillors, he said.

Since council voted this week to temporarily place the bronze figure of Cornwallis in storage, Savage said all councillors have received calls and emails both condemning and applauding the decision.

"People have the right to their point of view but we have to be respectful," he said. "It's a difficult issue because it involves sensitive topics like history, culture and human rights."

Whitman did not respond to a request for comment.

ID Canada responded on Twitter as well, saying, "Sad that Mr. Whitman is being scolded for supporting our letter condemning the removal of .cornwallis. You do not need to support us as an organization to support the preservation of Canadian identity. No, we're not 'white supremacists."'

The incident marks the latest controversy involving the councillor for Hammonds Plains-St. Margarets.

Last October, Whitman issued an apology for using the word "Negro" in an interview, prompting public outcry and at least one official complaint to the municipality.

At the time, the lone African-Nova Scotian member of council, Coun. Lindell Smith, asked Whitman to refrain from using the word, saying it was not appropriate, while the mayor said it was a "poor choice of words."

Whitman also apologized for a video he posted online that used racially insensitive language. In the video, Whitman yelled "Chinese fire drill!" as he and a friend scrambled from a car.

- With files from Brett Bundale