Halifax arch marks departure of soldiers in the Great War 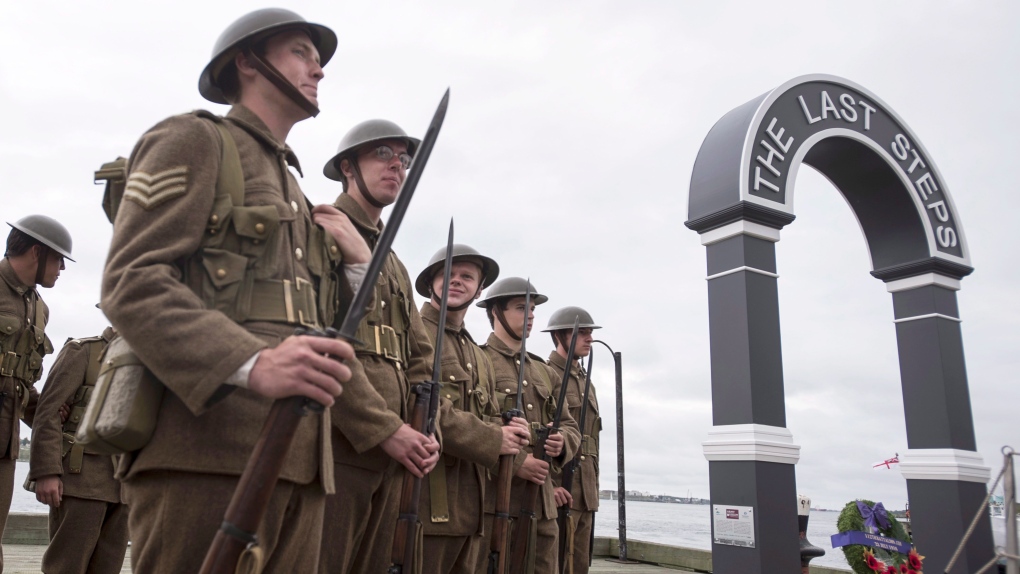 HALIFAX - A wooden arch baring the words "The Last Steps" was unveiled today on the Halifax waterfront near where tens of thousands of Canadian soldiers set off to fight in the First World War, never to return to return home.

Dozens of boot prints are now burned into the boardwalk on a pier leading to a gangway beneath the arch, symbolizing what were many soldiers' last steps on Canadian soil.

The memorial, the first major project of the Army Museum Halifax Citadel and designed by artist Nancy Keating, pays tribute to the departure of the first full battalion of Nova Scotia soldiers to fight in the Great War.

Burned in footsteps of new memorial evoke the hundreds of thousands who left this Halifax pier for First World War. pic.twitter.com/dHLsd9ejxi

Army Museum Halifax Citadel curator Ken Hynes says the Nova Scotia port city is where the nation went to war, and now there is a place for people to come and reflect.

Dozens gathered under grey skies for the ceremonial unveiling of the arch, which included words from Lt.-Gov. J.J. Grant and a rendition of "Green Fields of France," performed by Brian Doherty.

On May 20, 1915, more than 1,000 soldiers with the 25th Battalion (Nova Scotia Rifles) boarded HMTS Saxonia, a converted Cunard ocean liner, bound for the front lines.

They were joined by another 1,000 soldiers from what would become Quebec's Royal 22e Regiment, better known as the Van Doos.