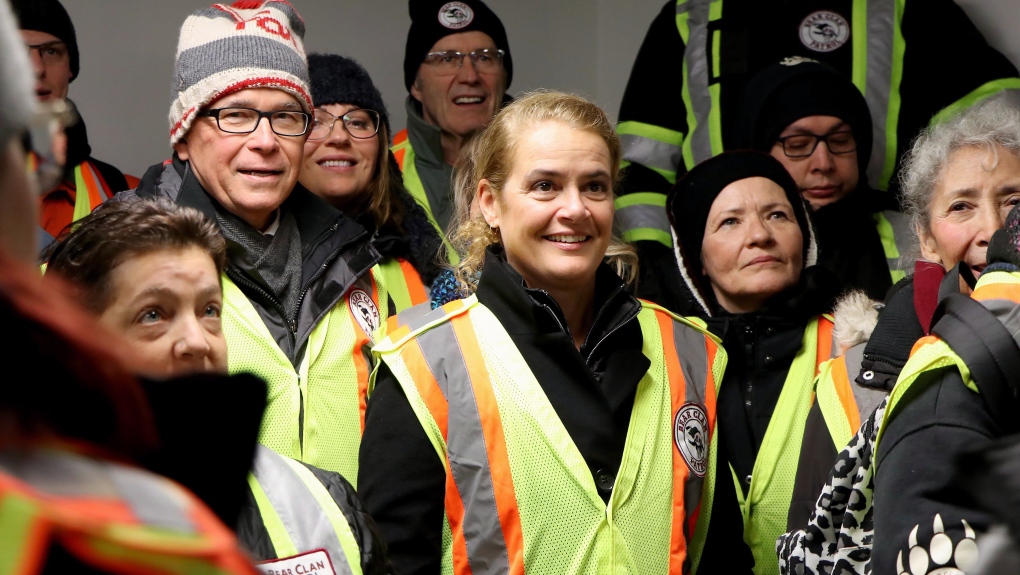 WINNIPEG -- Members of a neighbourhood patrol group stood on a street in Winnipeg and told Gov. Gen. Julie Payette about how a young woman overdosed in a nearby house.

Payette saw first-hand the realities of life in the city's north end as she joined the Bear Clan Patrol on a cold walk through the streets on Monday evening during her first trip to Manitoba since taking on the role.

Payette said she saw the generosity and perseverance of the group, and it showed what communities can achieve when they come together to find solutions.

"It reassures me that when we get together as a community, when we put our effort together and our will to help others, we can achieve anything and that is a lesson for us all," she said. "We have always a roll to play in any community and we have to do it -- it's being part of a society."

One street was known as a hot spot for drugs and sexual exploitation and another, just down the block from where Favel resides, was where a 35-year-old man was shot and killed earlier this year.

Favel took a moment to show Payette a house on Stella Avenue. A young woman had overdosed there, Favel explained, and the family moved just down the block after the tragedy. A year later the woman's mother was murdered.

The neighbourhood watch group was formed after the body of Tina Fontaine, a 15-year-old Indigenous girl, was found wrapped in a blanket weighed down by rocks in the Red River in 2014.

Since then, it has grown to include thousands of members and chapters in cities across the country.

Favel said it was important Payette was able to learn what the group comes across on a daily basis, including the impact of methamphetamine on the city.

Volunteer Vanessa Roulette held her phone up, excited to take a photo of the Governor General, who is a former astronaut and scientist.

Eleven weeks ago, Roulette was a needle user addicted to meth. She reached out to the Bear Clan because she wanted to change her life.

"If it wasn't for Bear Clan, I wouldn't be where I am today," she said, pointing to her fellow volunteers.

"I was scared when I was becoming clean, but now I'm not scared because I found my brothers and sisters."

It was the first time Payette, who was appointed to the position in October 2017, had come to the province. Her two-day visit also included a stop at the legislature and talk with Premier Brian Pallister, a visit to the University of Manitoba and a celebration of Francophone culture.

Payette said the trip was extraordinary and she was walking away with a lot of hope after the patrol with the Bear Clan.

"Part of the role that I am fulfilling as Governor General is to highlight what communities can do together," she said.