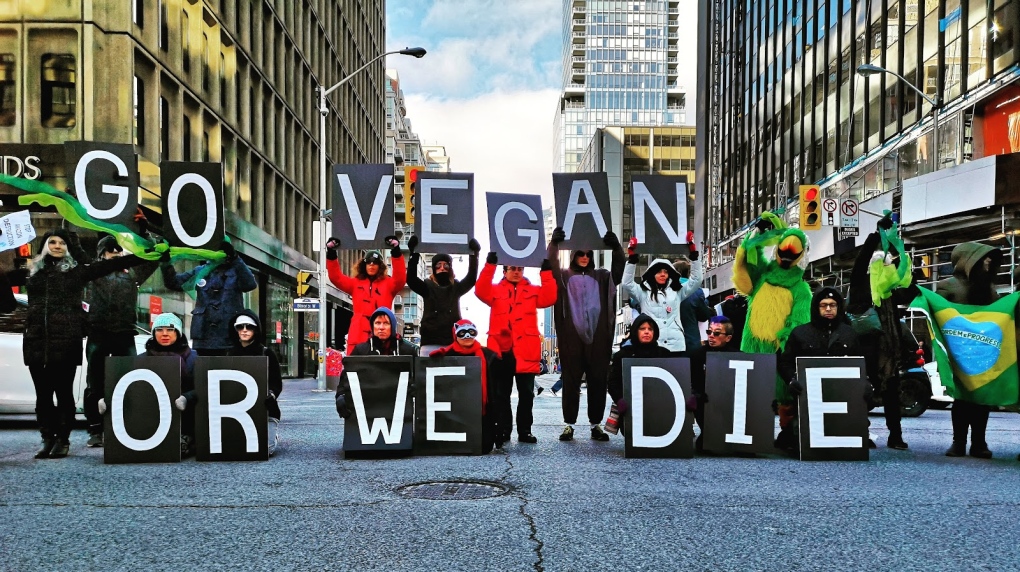 Animal rights activists blocked traffic at a major Toronto intersection on Tuesday, staging a “die-in” to protest the inauguration of Brazil’s new far-right president and his proposed environmental policies.

Organizers say nearly 50 people participated in the protest at the intersection of Bay and Bloor streets outside the Brazilian consulate. Some activists held signs urging President Jair Bolsonaro to “go vegan or we die.”

“We challenge President Bolsonaro to sign up for Veganuary,” Anita Krajnc, an organizer with the Toronto Climate Save and Extinction Rebellion told CTVNews.ca, referring to a movement that urges people to try living on a plant-based diet for the month of January.

The protests were held in solidarity with those happening in Brazil and in nearly a dozen cities around the world, including Ottawa, Oslo and Melbourne, Kranjc said.

Many of those who attended the Toronto protests were from Toronto’s Portuguese-speaking community, she added.

Since Bolsonaro rode a populist wave of anti-establishment sentiment to a presidential victory in October 2018, the former military general’s environmental plans have set off alarm bells among Indigenous communities and environmentalists over the fate of the Amazon rain forest.

Bolsonaro has promised to roll back enforcement of environmental laws and to expand mining, logging and animal agriculture in the world’s largest rain forest, which covers nine countries and is home to 30 million people.

Brazil has also withdrawn an offer to host this year’s United Nations summit on climate change, and its new agriculture minister has referred to Brazil’s environmental protection agency as an “industry of fines.”

Kranjc said that she and other activists began planning the protests as soon as they learned of Bolsonaro’s plans for the Amazon, which she said “would spell disaster for the globe.”

Kranjc said that animal agriculture poses one of the main threats to the future of the Amazon.

“If Bolsonaro went vegan, he would not contemplate cutting down the precious Amazon rain forest,” she said.