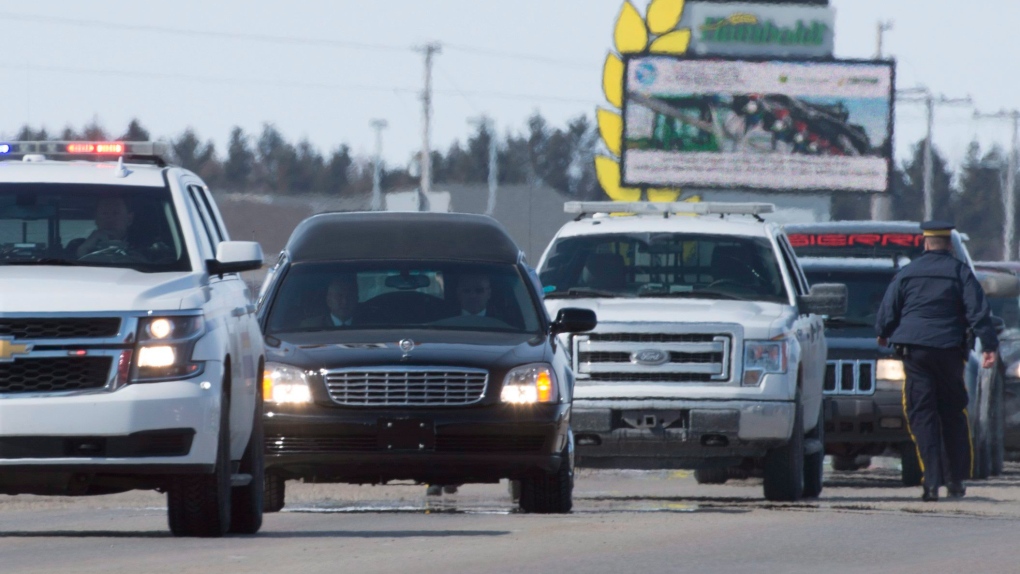 A hearse carrying the body of 19 year old Jacob Leicht of the Humboldt Broncos, leaves his funeral in Humboldt, Sask., Friday, April, 13, 2018. (THE CANADIAN PRESS/Jonathan Hayward)

HUMBOLDT, Sask. -- Chants of "Go Broncos Go" rang through the rafters during a young hockey player's funeral on Friday after his mother asked mourners to cheer for him one last time at his home rink.

Celeste Leicht asked the 2,500 people who filled Elgar Petersen Arena in Humboldt, Sask., to chant 11 times, followed by 11 seconds of horns and noisemakers, to honour her son's jersey number.

"I think it will be a beautiful send-off to my beautiful boy," she said.

Jacob Leicht, 19, was one of 16 people who died after a transport truck and a bus carrying the Humboldt junior hockey team collided last Friday at a rural Saskatchewan intersection.

Family friend and former coach Shaun Gardiner said Leicht wasn't a big player, but what he lacked in size he made up for in hard work.

"Jacob was the classic underdog hockey player that everybody roots for. He was a fluid and fast skater despite being smaller in stature than his peers," Gardiner said.

"He had the drive and the will to allow him to earn ice time, opportunities and playing time with all the teams he ever played for."

Celeste Leicht thanked the community and the rest of Canada for the kindness and support the family has received.

"I do know we are going to have a lot of dark moments. I know we have a long hard road ahead of us and for that reason we need something to cling to," she said.

"You're here to provide your respects to truly honour our son. I ask you to commit yourself to making connections and building relationships."

There was applause several times during the service, including for three surviving Broncos, one of them in a wheelchair, who were able to attend.

A display in the foyer included dozens of photos, Leicht's No. 11 jersey, a Broncos hat and a picture of a smiling boy kneeling in front of a hockey net. It was paired with a small handprint dated 2002

Helen Friesen-Ebert came with her family to pay respects. She said the send-off for Jacob was appropriate.

"It was nice and I truly think, not that I knew Jacob, I have a feeling he got it and he heard it."

'He was a gift': Humboldt Broncos stats keeper remembered for memory, kindness

'One team for Humboldt': Supporters don jerseys in global show of support