An anonymous petitioner is asking the U.S. federal government to give a small piece of territory “back” to Canada, saying that’s where it rightfully belongs.

According to a petition on the White House website, a 320-square-kilometer chunk of land known as the Northwest Angle belongs in Manitoba, not Minnesota.

“Negotiators of the initial Canada–U.S. border misunderstood the geography of the area,” states the petition entitled “Give Canada back the Northwest Angle.”

“Benjamin Franklin and British representatives relied on the Mitchell Map of colonial American geographer John Mitchell,” the petition goes on. 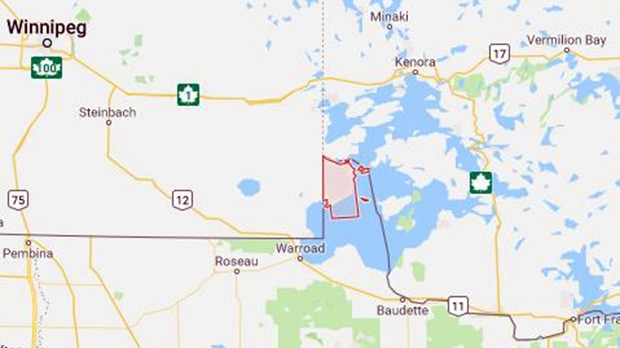 This image from Google Maps shows the Northwest Angle in red, next to Lake of the Woods.

The Northwest Angle, technically known as Angle Township, Minn., is a piece of land surrounded by Manitoba to the west and Lake of the Woods to the east. It’s not connected to the rest of Minnesota because an agreement between Britain and Canada made long before confederation used an inaccurate map.

In 1818, Britain and the U.S. settled a number of border disputes with the Treaty of London. That treaty said the border between British North America and the U.S. would be defined with a line from the farthest northwest corner of Lake of the Woods and “north or south, as the case may be” to the 49th parallel and then “west along the parallel to the Stony (Rocky) Mountains.”

Lake of the Woods wasn’t an oval as the Mitchell Map suggested, meaning about 320 kilometres of land was severed from Manitoba by the new north-south line and ended up inside the United States.

The roughly 120 people who live in that piece of Minnesota are now forced to drive through about 100 kilometers of Canada to reach the rest of the U.S., causing some to wish they lived in Canada.

In the 1990s, an American who owned a fishing lodge in Angle Country led a campaign for Angle Township to secede from the U.S. because fish caught by tourists couldn’t be brought across the border, according to CBS.