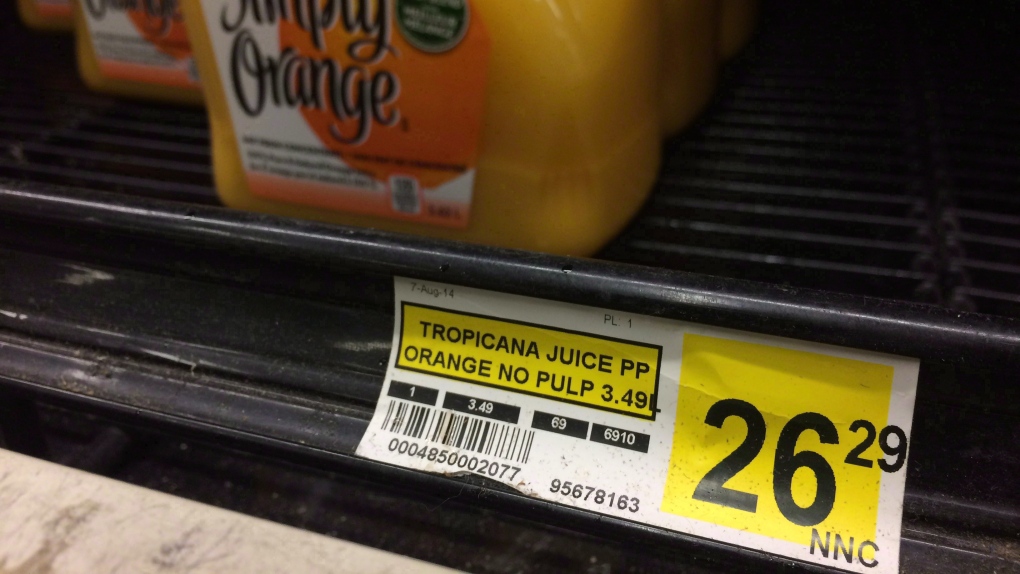 A price tag lists the price of a jug of orange juice at a grocery store in Iqaluit, Nunavut on Dec. 8, 2014. (Sean Kilpatrick / THE CANADIAN PRESS)

QIKIQTARJUAQ, Nunavut - A teacher in Nunavut who turned to crowdfunding for a modest greenhouse to grow vegetables with his students is revising his plans after Canadians responded with a bumper crop of donations.

Adam Malcolm originally asked for $4,500 on GoFundMe for a greenhouse about the size of a garden shed to grow fresh produce in Qikiqtarjuaq, but following news reports about his project last month, more than four times that amount has been pledged.

A welding equipment company, Weldcor, has even paid for two larger greenhouses, which Malcolm said have made it as far as Iqaluit and are awaiting a flight to the Inuksuit School in the remote Baffin Island community.

"A lot of planes come but the weather is not good, so they get turned around and never do land, and more things get backed up in cargo in Iqaluit," Malcolm explained in an interview with The Canadian Press about the realities of transport in the North.

"I've talked to people who've ordered things, and had like a skid of this or that be held up in Iqaluit for up to three months. I really hope that's not the case here."

Malcolm said Loblaw has donated seed kits. There have also been many letters with advice and encouragement, which Malcolm has posted at the doorway to his classroom.

One letter that arrived Friday came from a retired teacher in Ontario, who Malcom said had suffered a stroke.

"You could see that it really took a lot of effort for her to write this letter but it was such a sweet letter to receive. She didn't know the process for helping out but she wanted to know how she might be able to help out financially," Malcom said, adding he'd be showing the letter to his students Tuesday.

"We'll put some words down to send back to her."

Malcolm started crowdfunding for a greenhouse because of the high cost of healthy eating in the North. He said four tomatoes cost $14. A bag with six apples and three oranges is $20.

His original plan called for a small heater for the greenhouse, because even though there's plenty of daylight now, the nights can still get cold. With the extra money, he's hoping to get a heating system that would work year-round.

The students will also need more dirt for the additional greenhouse. Malcom said he looked into shipping a pallet of soil, but changed his mind when he found out it would cost just under $11,000 to fly it in. They've opted to mix compost from a worm digester with local, sandy peat.

More soil, along with the heating equipment, will arrive later this summer when the ice is free and a cargo barge will arrive in the community.

"Maybe other people out there in different communities in the North who are thinking about doing something similar can learn from our mistakes and what we're doing right," Malcolm said.