From Saanich to St. John's: What rent costs across Canada 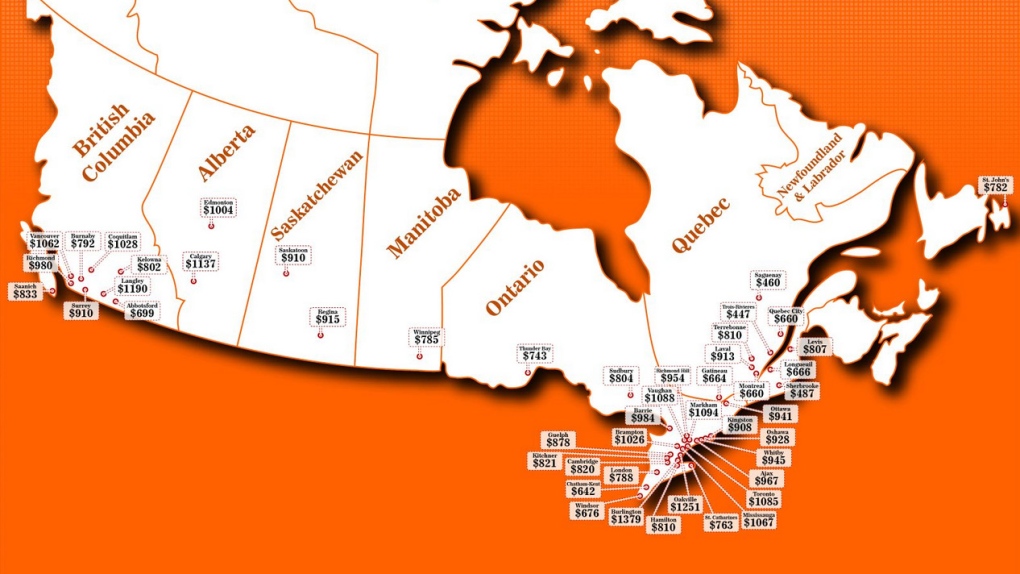 An infographic complied by RentSeeker.ca shows the average rental price of a one-bedroom apartment across Canada.

Wondering how much fellow Canucks are paying in rent? Thanks to data compiled by a Canadian apartment listing website, now you can find out how much renters across the country are asked to fork over each month.

The data released by RentSeeker.ca this summer compares average rates for apartments in Toronto, Ottawa, Montreal, Vancouver, Edmonton, Winnipeg and other Canadian cities. It did not include data from the territories or from New Brunswick, Nova Scotia, and Prince Edward Island.

RentSeeker.ca is one of Canada's largest online apartment search sites, which connects tenants to owners of houses, townhouses, condos and apartments for rent. The data was taken from the Canada Mortgage and Housing Corporation, which compiles rent rates based on reports from landlords.

The cost of renting an apartment is highest in areas surrounding major cities such as Toronto and Vancouver, but the data shows how far out of the city renters need to travel to find cheaper rates. In some cases, rental rates in areas adjacent to major cities were actually higher than the averages within city boundaries. For example, rent is higher, on average, in parts of the Greater Toronto Area, like Ajax and Burlington, than in the city itself.

On the west coast, rent in Vancouver was comparable or lower than rent in the neighbouring cities of Langley, Richmond, and Coquitlam.

The most expensive place to rent a studio or bachelor apartment is Ajax, a town located east of Toronto. According to the data, the average price is $1,253 per month.

The cheapest place to rent a bachelor apartment is Trois-Rivieres, Que., located halfway between Quebec City and Montreal, where apartments go for an average of $384.

RentSeeker.ca found that the average cost of a one-bedroom is highest in Burlington, Ont. where the average monthly bill is $1,379. Burlington is a city located between Toronto and Hamilton, Ont.

The lowest average for one-bedroom units is also in Trois-Rivieres, with an average rent of $447.

Similarly, the highest average cost of a two-bedroom apartment is in Burlington at $1,558, while two-bedrooms go for $571 in Trois-Rivieres.

Langley, B.C., a city southeast of Vancouver, has the highest average rent for three-bedroom apartments at $1,773, while the lowest rate is $618 in Trois-Rivieres.

Here's a look at the average costs for renting a one-bedroom apartment across Canada:

The infographic below shows the breakdown of rents by apartment size and city. It can be viewed in a larger format online.