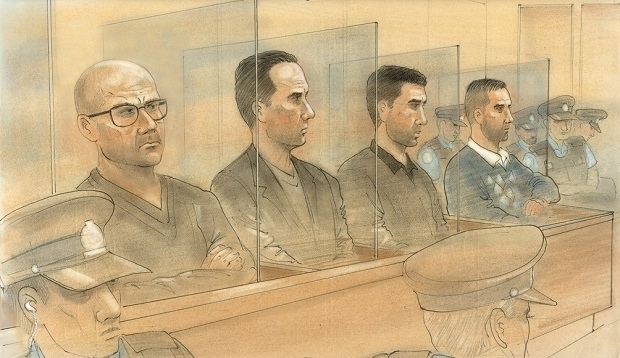 TORONTO -- Four men accused of arranging a brazen daytime killing at a crowded Toronto cafe as part of a feud among drug traffickers were found guilty of first-degree murder on Thursday.

The men showed little emotion when the jury foreman announced the verdict in a packed courtroom. The jury deliberated for two days before making its decision.

The four men are to be sentenced on the conspiracy count at a still-to-be determined date but their lawyers will return May 23 possibly to make arguments about how long it took to get to trial.

Prosecutors accused Wiwchar of actually carrying out the killing of John Raposo, who was shot on the patio of the Sicilian Sidewalk Cafe on the afternoon of June 18, 2012, as soccer fans gathered to watch a Euro Cup game.

The group orchestrated the hit on their rival partly because they believed he had ratted Nero out to authorities, prosecutors said.

Nero, Caputo and Alkhalil plotted to steal a 200-kilogram shipment of cocaine from Raposo, split the money between them, and have him assassinated, court was told.

The Crown relied partly on encrypted messages it said were exchanged by the men in the months leading up to the shooting.

In at least one message, Nero called Raposo a "rat" who deserved to die for the harm he had caused, court heard. Another message had Wiwchar calling himself a contract killer who warranted a $100,000 fee.

But one of the defence lawyers said any talk of revenge in those messages was pure "macho trash talk" and should not be considered proof of a murder plot.

Alan Gold, who represents Nero, told the court the group considered stealing the drugs from Raposo to be retribution enough.

Prosecutors alleged Wiwchar travelled from Vancouver for the job, and donned an elaborate disguise in an effort to evade authorities.

Witnesses described the killer as wearing a shoulder-length wig, sunglasses, a dust mask, an orange construction vest with a reflective X on it and a hardhat, court heard.

The Crown said a hardhat, construction vest and skin-coloured face masks were among the items found in Wiwchar's Vancouver home, while searches on his home in Surrey, B.C. netted a cache of firearms as well as wigs, liquid latex skin, theatrical makeup, fake moustaches and beards and other items.

Other searches uncovered more than $60,000 in cash, the prosecution said.