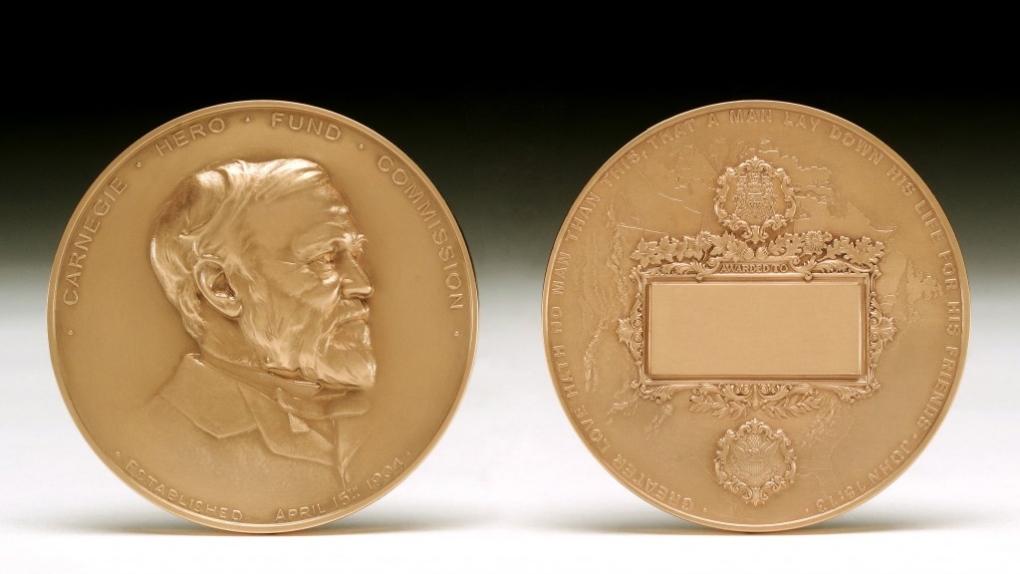 An example of a medal awarded by the Pittsburgh-based Carnegie Heroes Fund Commission is seen in this image from the organization's website. (www.carnegiehero.org)

PHILADELPHIA - Four Canadians are among 24 people being honoured with medals and cash from the Pittsburgh-based Carnegie Heroes Fund Commission.

They include Helen Goulet of Courtenay, British Columbia, who saved her 89-year-old friend from a house fire in January.

Goulet, who was 72 at the time, was helping Rose Downing's husband clean out their garage when she heard a scream from the house. Goulet entered the burning home and dragged Downing to safety.

The other Canadians include Clifford W. J. Peterson, a police officer from Ajax, Ont., who saved a man from falling off an icy bridge in Toronto on Dec. 8, 2013.

Fraser A. Potts of Limoges, Ont., is being honoured for saving a woman from drowning in a suicide attempt in Fairford, Man., on May 10, 2013.

The fourth Canadian is Joshua J. Gardner of Calgary, who saved a man whose SUV left the roadway and landed in a golf course pond on July 5, 2014.

The Carnegie Hero awards, to be formally announced on Thursday, are named for Pittsburgh steel magnate and philanthropist Andrew Carnegie, who was inspired by stories of heroism during a coal mine disaster that killed 181 people, including a miner and an engineer who died trying to rescue others.

The commission investigates stories of heroism and awards medals and cash several times a year. It has given away $37.7 million to 9,821 awardees or their families since 1904.