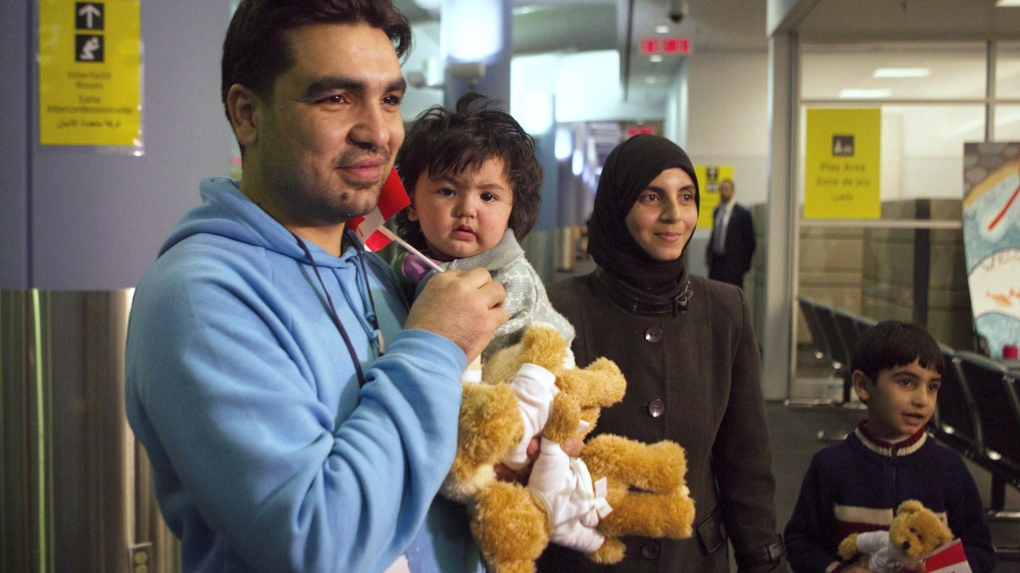 In this file photo from Dec. 18, 2015, a family of Syrian refugees arrives at the Welcome Centre at Toronto's Pearson Airport. (THE CANADIAN PRESS / Chris Young)

SURREY, B.C. -- Fatum Ibrahim is pointing to her nose and smiling ear-to-ear.

Three years ago, a day shy of Valentine's Day, 36-year old Ibrahim and seven family members landed in Surrey, B.C., as part of Prime Minister Justin Trudeau's signature Syrian Refugee Initiative. She didn't know a word of English, nor could she read or write in her native Arabic.

Despite taking language classes four days a week, she has a long way to go to meet the English-language requirement for Canadian citizenship. While her mom, dad, grandmother and two school-age brothers are eligible to become citizens this year, she and two other adult siblings, who also never learned to read or write, will not be. Without a passport, they are stuck in Canada, unable to visit the six siblings they left behind in Turkey.

"I want to be a Canadian. I love it because our country has been destroyed and is gone. Now Canada is our only country. ... But I don't think I will learn to pass the English test until the end of my life," Ibrahim says through an interpreter.

Ibrahim and her two siblings, both of whom live with intellectual disabilities, are not anomalies.

While Syria's average literacy rate -- eight in 10 before the war took a toll -- is relatively high for the region, there is a sizeable disparity between rates for men and women. Only 77 per cent of Syrian women are literate, compared with 90 per cent of men, with rural women such as Ibrahim faring the worst. It was these women and their families whom the Canadian government prioritized for resettlement.

"I went to school only for one year, in the first grade. But I didn't like it. I wasn't smart," Ibrahim says. "None of my sisters finished school; our brothers did. We spent our days cooking, cleaning the house, laughing, playing. We were so happy. ... Only here in Canada did I start school again. I was terrified."

Diana Jeffries manages English-language classes for Pacific Immigrant Resources Society, with funding from the federal government's Language Instruction for Newcomers to Canada (LINC) program. She says adult literacy learners such as Ibrahim are right to wonder whether they will ever qualify for citizenship.

To meet the English-language requirement, individuals must reach Level 4 of the Canadian language benchmarks, meaning they can understand simple sentences and use basic grammar. Ibrahim has sat in a Level 1 class for more than a year.

"It is impossible. I have never seen someone who is non-literate get past a Level 2 literacy level," says Jeffries. "You also have to take into account, not only do these women have no literacy skills, they often have tons of anxiety about being in a classroom. They also are women who have a lot of other things going on -- often, they lack any sense of agency and have so many other needs with children, caretaking and domestic violence. It can take six months to learn how to print on a line and because it takes a really, really long time, they can give up."

Ibrahim is not giving up yet, having just learned how to hold a pen and write her first name. She and her mom, Shakha, try to make it to their three-hour classes Mondays to Thursdays.

But chronic health challenges lead to sporadic attendance. And attendance matters more than ever.

Since 2016, LINC programs have adopted a new way of measuring language proficiency. Called the portfolio-based language assessment, it requires students to collect evidence of 32 successfully assessed assignments in order to rise to the next level. Assessments are held in class, so missing a session means missing an opportunity to progress.

Julie Ship, the settlement language co-ordinator for British Columbia's Affiliation of Multicultural Societies and Services Agencies, argues that the portfolio process is not designed for adult literacy learners who face barriers to classroom engagement. There was no feasibility study of how changes to the assessment process might affect refugees with low-to-no literacy in their native tongues.

"We are hearing clients are intimidated by the whole process, and if they miss a class, which happens a lot when there are health appointments or they need child minding, they miss out on the assessment," Ship says. "It is almost too rigorous. The idea was to introduce a steady flow of assessments, but it actually kind of backfires, because talking about assessments all the way through still conveys something scary."

In fact, the portfolio process is so rigorous that it exceeds the government's language requirement for citizenship. To become a Canadian citizen, refugees aged 18 to 54 who have lived in Canada for three years must demonstrate that they can speak and listen at Level 4. Older refugees such as Ibrahim's mother, father and grandmother are exempt.

The portfolio assessment process gauges skills in four areas: speaking, listening, reading and writing. Although individuals can pay $200 to bypass LINC classes and take an English-language test, they must be able to read and write to use its online interface. That puts refugees with no experience of reading or writing at a disadvantage. Without a Level 4 certificate, these refugees won't become citizens, with the capacity to vote or freely travel, until they turn 55.

Immigration Refugees and Citizenship Canada responded to a request for comment with a statement that did not address questions about the needs of refugees who are illiterate in their primary language.

It says in 2018-19, it is spending about $762 million to support the settlement needs of newcomers across all provinces and territories, excluding Quebec, and it spends more on language training than any other settlement service.

"IRCC-funded language training is offered at a range of ability levels from basic literacy to advanced language skills," it says. "This includes more specialized courses such as labour market language training, which offers job-specific programming, mainly at higher language proficiency levels, coupled with mentoring and work placements to speed up the transition to employment."

In 2008, before the influx of Syrian refugees, Jeffries ran a pilot program specifically for refugees with multiple disadvantages. The program's funding was not renewed and did not run long enough to compare results with standard programming.

"The pre-literacy classes were fantastic, because it was really using different teaching pedagogies that were more experiential and kinesthetic," Jeffries says. "Reading on a flat surface is not easy, nor is looking at black-and-white text on a piece of paper left to right. We could do art projects that were language-based and that were satisfying. In cooking, they could make measurements. We could paint the alphabet, and just do more creative things. Now, there is nothing like that with portfolio-based language assessment."

Andrea Solnes, an independent consultant in settlement language, has been writing a guidebook on marginalized and multi-barrier learners, based on research with English-as-second-language teachers. Best practice suggests pair work, learning stations, active use of volunteers and paid teaching assistants.

"None, that's how much specific training there is about illiteracy. Teachers are clearly expressing that they would like more," Solnes says.

To improve outcomes for adult literacy learners, both Solnes and Ship see value in an approach that is less focused on meeting standards and more focused on building relationships between refugees and the broader community.

"Because language classes are often the first services that newcomers to Canada access, it is such a strong place to work from," Solnes says.

But she says the push for a more standardized assessment structure means students spend less time outside the classroom learning other skills they need to be successful in Canada. "It's important to not just look at language outcomes, but overall community engagement."

Ibrahim is seeking more community support. She asks whether the interpreter can help her prepare for the language test. While she feels she is making progress in the classroom, it is outside those four walls where she struggles most.

"I only understand at school with my teacher," Ibrahim says. "What is there outside of school to help me learn? I wish there were other classes after my class. We are trying. English is very hard."