Former PM Brian Mulroney opens up about life with diabetes

With nearly a decade at the helm of the Canadian government, Brian Mulroney says he became accustomed to late nights, bad eating habits and working under immense pressure.

But the former prime minister now deals with a different type of stress in his life after being diagnosed with diabetes in Sept 2010.

The 73-year-old says the diagnosis came as a shock.

And for a man who, as Canada’s 18th prime minister, managed a hectic schedule that saw him travel the world and meet with other world leaders, adapting to chronic disease seemed overwhelming at first.

“I was used to getting up in the morning and starting work and doing what I wanted all day long,” Mulroney told CTV’s Avis Favaro. “Working, travelling, speaking, all of this without having to worry about what do you eat, what do you drink, you have injections to take, you have pills to take … I had none of that.”

The former prime minister discovered his condition almost by chance: During a 2010 trip to Turkey, Mulroney developed Hepatitis E. A slew of tests into the liver condition also revealed Mulroney had diabetes, joining the estimated nine million Canadians who suffer from the disease or a prediabetes version of it.

“That was the end of me,” he recalled thinking to himself.

His doctors believe the diabetes was caused by a combination of factors, meaning Mulroney has a rare blend of Type 1 and Type 2 diabetes.

An infection in 2004 caused pancreatitis and weakened the insulin-producing organ, consistent with Type 1 diabetes. However, onset of the disease later in life points to Type 2 diabetes, which is linked to diet and lifestyle.

“So I was in the hospital, (and) they ran every test on me. And they came in to see me and they said ‘look, you’re a full blown diabetic and we’re going to have to do something about it if you want to live.’ ”

Mulroney said the diagnosis was devastating.

“I was 70 and I had made it that long, living the life that I did,” he said. “The life of a prime minister is not always easy, the ups and downs, and there’s lots of pressure and tension and bad habits of travel and eating sandwiches at 3 a.m. All the things that you shouldn’t do, you tend to do in public life.”

He immediately began a routine of medication, injections and strictly monitoring his diet and blood sugar.

And while Mulroney knew his lifestyle wasn’t always conducive to optimal health, he said he had taken up walking and healthier habits to keep himself in good shape – thinking those activities would help protect him from such conditions.

“That’s the irony of it … Seven days a week, I’m out there: an hour-and-a-half… with my fast walk every day,” he said. “I’ve been doing it for years and years and years. Hell, everybody in Montreal … can tell you when I walk by.”

He added: “I haven’t had a drink in 33 years, I don’t smoke, I don’t go crazy too often … I wasn’t great but I wasn’t bad. But there was something in my system I guess that gave me a proclivity for whatever hit me and now I have to deal with it.”

Mulroney said his new lifestyle took some adjusting to, as did the realization that he’d have to live with was essentially a treatable – but not curable – disease.

“It is common that people struggle with diabetes,” said Mulroney’s diabetes specialist, Dr. Remi Rabasa-Lhoret. “He had trouble to accept that it’s a chronic disease that we know how to treat but we cannot cure.”

And Rabasa-Lhoret says Mulroney has been very “compliant” with his new routine after undertaking a step-by-step process to improve his overall lifestyle.

“The physical activity, the weight control, the improved quality of food… he really got it, if (we thought) that it could help him.”

If you want to email Mulroney questions about his diabetes diagnosis, you can reach him via his assistant at: wakou.ngambany@nortonrose.com. And tune into CTV National News with Lisa LaFlamme Wednesday night, to see part two of Avis Favaro's interview with the former prime minister. 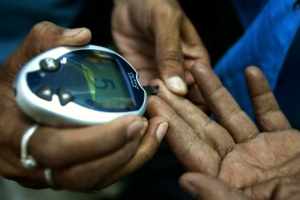 The changing face of diabetes in Canada