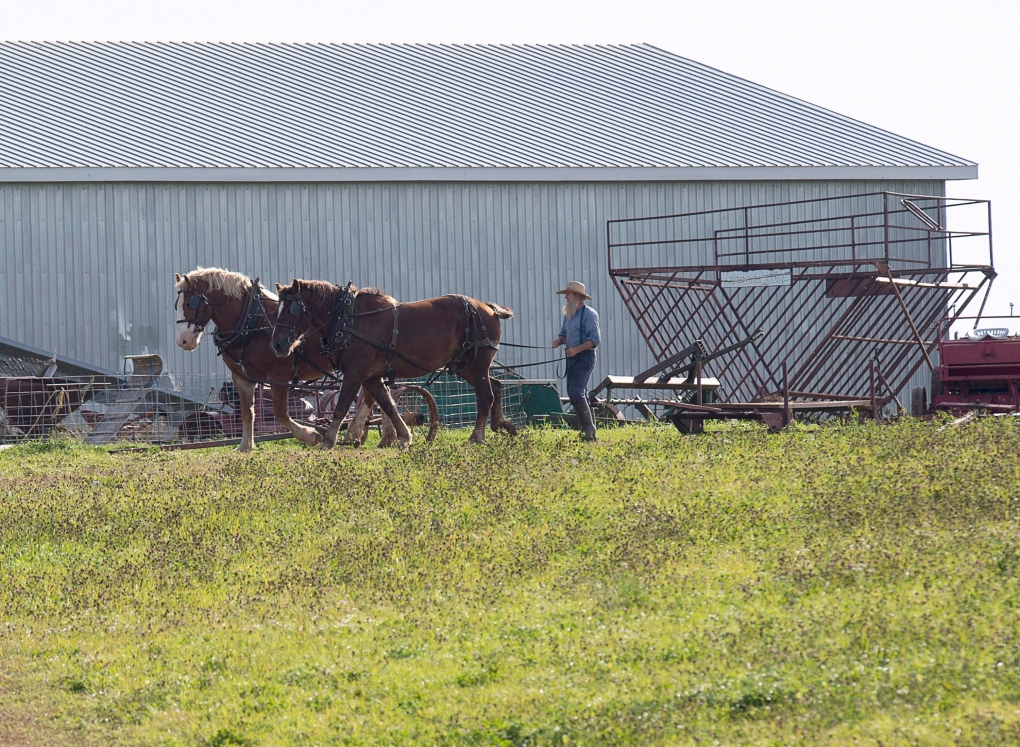 An Amish farmer takes his team back to the barn in Summerville, P.E.I., on Saturday, Oct. 8, 2016. Over the past year, eastern Prince Edward Island has become a bit of an Amish paradise, and Islanders are welcoming the new settlers with open arms. (THE CANADIAN PRESS/Andrew Vaughan)

MONTAGUE, P.E.I. -- There's a sudden population boom in eastern P.E.I., and the local hardware store has been buzzing.

His new clients, he says, are very particular about their straw hats.

About 14 pioneer Amish families from southwestern Ontario have bought farms here this year, lured by low land prices, and settled in the communities of Dundas and Summerville. Many more families are expected.

"Being rural P.E.I., any time there's new business, it's a boom," Beck said from his perch on Main Street.

A horse-drawn wagon soon passes by, heading into downtown. Onboard are two young Amish men, each dressed in light blue shirts, dark blue pants with suspenders, and straw hats. One sports a bushy beard.

"We see the buggies in the town every week and it's kind of exciting," says Beck. "It's new, it's change, and it's nice to see the old farms getting worked."

Islanders, thrilled at the sudden interest in a shrinking, aging corner of their rural province, are going out of their way to help make it an Amish paradise.

A number of businesses in Montague and Cardigan have installed hitching posts where buggies can be parked. Along the highways and roads in the area, there are signs urging caution that horses and buggies might also be using the road.

Amish are groups of traditionalist Christian church fellowships. They are known for simple living, plain dress, and a reluctance to adopt modern technology.

None agreed to be interviewed, but their impact is undeniable.

Brad Oliver, a real estate agent in Montague, first became involved in 2014 with efforts to move the Amish families, by helping them find land -- often older farms that needed some TLC and hadn't been tilled in years.

"They've done an amazing amount of building and renovating on the properties that they bought. They are very industrious and well-organized," he said.

"A lot of their work is community based where they'll work on one fellow's farm and a few days later you see them working on another."

Oliver said a big attraction for the Amish settlers has been land prices.

An agreement was reached with the provincial government to allow the Amish to do a form of home-schooling with an old-fashioned, one-room school house.

The first families arrived in the spring. He said they're also impressed with the quality of the P.E.I. soil.

"A good comment I heard from one guy was 'My horses love it here.' The land is lighter and they can do with two horses what it would take three or four horses to do in Ontario. They are very happy so far."

At most of the Amish farms, you'll find roadside produce stands, or signs directing you in to buy produce or baked goods. One place also listed puppies and bunnies as items for sale.

For Mary Grant, at the nearby farm feed supply business in Cardigan, the Amish have become clients, friends and a draw for tourists.

"It's just a plus, plus, plus because it's a way of life that is intriguing to most people and even when they stop at the vegetable stands, a lot of people stop more out of curiosity than anything else," she said.

Grant said many of the retired farmers in the area are happy to see the old farms being used again and have embraced their new Amish neighbours.

"The retired farmers around here have taken the Amish under their wing in a big way. A lot of times when they come in here, they come with retired farmers from Kings County who spend time with them and take them places. They all have a good time," she said.

The Amish are known for their draft horses, and Grant said most of the farmers in the county are sending their horses to the Amish to be trained.

"People who deal with the Amish families directly can see what they're adding to our province as a whole."

MacLauchlan said the Amish have been a spark for the local economy and he expects more to arrive over the next two years.

Two weeks ago, the first Amish baby was born on the Island -- a little girl.

MacLauchlan said he also expects the Amish to spark a sense of pride and enthusiasm in the area.

"That's always hard to measure but not hard to see," he said.