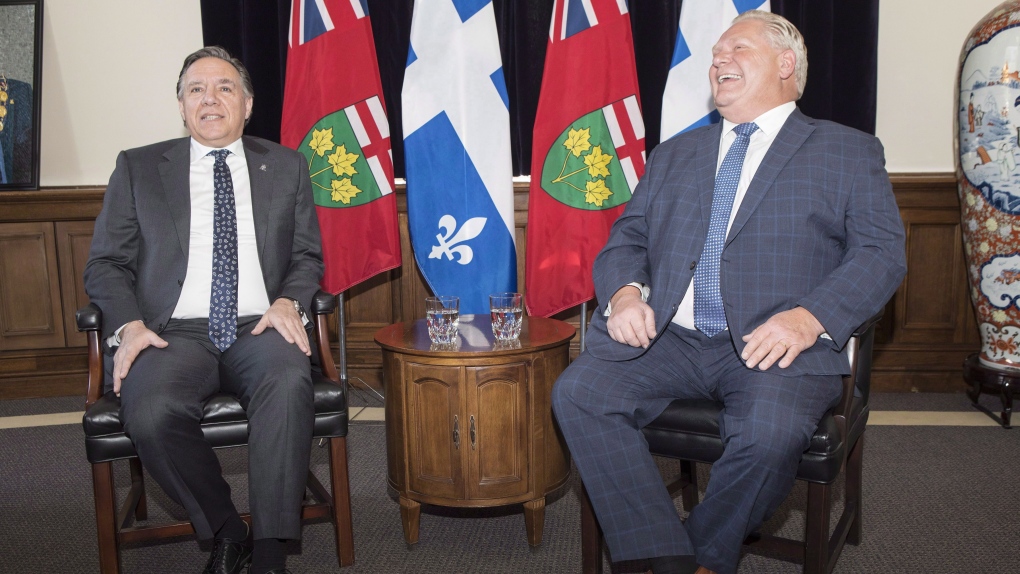 MONTREAL -- The premiers of Ontario and Quebec say they plan to work together to press the federal government for a more flexible immigration system and more money for health care.

Premier Doug Ford and Premier Francois Legault released a joint statement after holding a private meeting in Montreal on Friday.

The two leaders also pledged to work together to remove trade barriers and increase the flow of goods between the two provinces.

"Ontario and Quebec have had a strong record of working together to create a competitive business environment in our provinces and prosperity for our people," they said in a release.

"We repeat our call to the federal government to immediately ratify the Canada-United States-Mexico Agreement when Parliament resumes and actively counter damaging Buy American policies in order to protect Ontario and Quebec workers and businesses."

Before the meeting, Ford suggested they would not be discussing Quebec's secularism law.

But Legault had said he would share with Ford his displeasure over a recent motion adopted in the Ontario legislature opposing the law, which prohibits some public sector workers from wearing religious symbols.

Ford's Progressive Conservatives voted in favour of the Opposition NDP motion this week, and the premier said he has made his feelings on Bill 21 clear.

"I totally disagree with it," Ford said. "(Legault) knows it. I've stated that numerous times. There's no place for Bill 21 here in Ontario. There never will be under my watch."

Legault said that Ford already understands his position on Bill 21 as well -- and while he will raise his displeasure with the Ontario motion with Ford, that is not his chief concern.

"The priority for Mr. Ford and me is the economy," he said.

Their meeting comes just days ahead of a meeting of all premiers in Toronto on Monday.