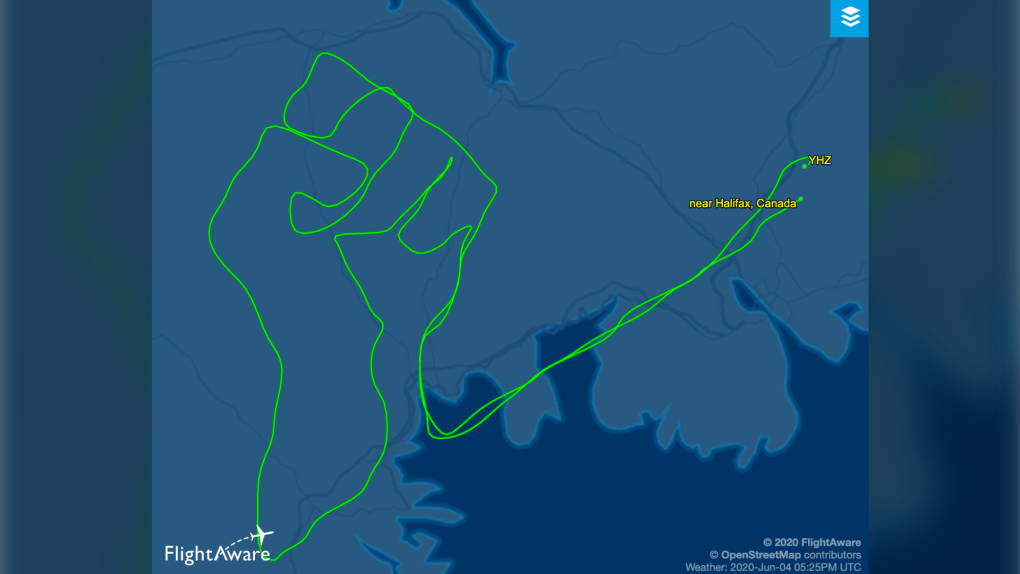 A Dartmouth, N.S. pilot known for his elaborate flight path drawings took to the sky to draw a fist in a show of solidarity for the anti-racism movement. (FlightAware)

TORONTO -- A Dartmouth, N.S. pilot known for his elaborate flight path drawings took to the sky Thursday to draw a fist in a show of solidarity for the anti-racism movement.

“Racism is gaining ground on us. It was always there, throughout history, especially here in North America,” pilot Demitri Neonakis told CTVNews.ca by phone Friday.

“Seeing the latest news, my way to express not anger, but disbelief... an array of emotions… was to draw it in the sky.”

Measuring 330 nautical-miles, the flight path, which took the shape of a clenched fist, was spotted on flight tracking software Flight Aware and quickly shared on social media by some who described it as a “beautiful” show of solidarity.

“I had a lot of up drafts which created moderate turbulence yesterday, making things difficult. But I was saying to myself, ‘I need to nail this one,'" he explained.

The clenched fist is the latest of Neonakis’ flights to attract attention. Over the last several months, the pilot has taken to the sky on multiple occasions to spread messages of hope, drawing a heart over the province after the mass killing in Portapique, N.S., and honouring Capt. Jennifer Casey, killed in the Snowbirds crash in May.

“2020 has given me many reasons to fly, unfortunately,” he said. “When people tell me that it made their day or spread hope… it gives a purpose to this thing that I do, that I love.”

Neonakis, who has been flying for over 20 years, is the founder of Dream Wings, a program that provides children with disabilities the opportunity to co-pilot a flight. Since 2017, Neonakis has flown with more than 500 children as his co-pilot.

Though the program is facing an indefinite pause in light of the COVID-19 pandemic, Neonakis says his sky drawings have allowed him to find more “beautiful moments” in the air.

'In Edmonton it happens a lot': Local Black man restrained by the neck during arrest speaks out

How has racism impacted your life? We want to hear from you