Flooding forces hundreds of evacuations on the Prairies

Based on early estimates, the cost of Saskatchewan's flood damage this year will exceed that of three years ago, Premier Brad Wall says.

"We think we’re looking at an event that was larger in financial impact than the 2011 flood because it’s so widespread," he said at a news conference Tuesday, adding that highway damage was also a significant factor.

But he insisted that finances weren’t the primary concern while floodwaters still posed a threat.

The good news, Wall said, is since Saskatchewan experienced heavy flooding in the past, the province is in a better position to respond to this disaster.

"We have a lot more pumps. We've just purchased more equipment,” he said. “And so we have better knowledge, better expertise by our response team."

Between Saskatchewan and Manitoba, heavy rain and flooding in recent days has caused more than 80 communities to declare states of emergency, and approximately 700 people have been affected by mandatory evacuation orders.

Parts of southeast Saskatchewan got more than 240 millimetres of rain in recent days that fell on land already saturated with water. With nowhere to go, the rain began filling low-lying fields and roads, rushing into basement windows, and trickling under doors.

The rising waters forced nearly all of the 250 residents of Gainsborough, Sask., from their homes Monday. Most of the residents have left town to stay with family or friends, while others are in RVs or camper trailers, local officials say.

The mayor of Gainsborough said dozens of homes and businesses in town have been flooded and that the cleanup was "going to be a disaster."

"Unbelievable. It's been amazing," he told CTV News Channel. "We took in 65 evacuees and we had zero sleep in the evacuation centre. People in the community have opened up their homes, their campers. Other communities have done the same. Hotels are giving rooms for free."

In Melville, Sask., the city’s official Facebook page says all patients at St. Peter's Hospital and St. Paul Lutheran Home, a long-term care facility, have been evacuated. Though no water has entered the hospital, more than 150 patients have been transferred to the nearby communities of Esterhazy and Yorkton, Sask., while the long-term care residents are at the local hockey arena.

In Yorkton, another 66 residents on the lower levels of four apartment buildings have also been asked to leave their homes.

Road access into the village of Carievale, Sask., has been cut off because water is flowing over the main road and a bridge has become impassable, the RCMP says. Sections of at least 15 highways in Saskatchewan have been closed, including a stretch of the TransCanada east of Regina.

In Manitoba, the rain has led to record flow levels on 13 rivers and streams.

"Creeks that are often pretty minimal in terms of flows have become far more than creeks, often much more approaching rivers in terms of flows," Manitoba Infrastructure and Transportation Minister Steve Ashton told The Canadian Press.

The flooding has forced hundreds of people from their homes. Manitoba Premier Greg Selinger got a first-hand look at some of the damage caused by the flood when he took an aerial tour of the province on Tuesday.

"Those people have suffered enormously and we know all the volunteers and the local people did everything they could to protect those homes," Selinger told CTV News. "When people have to evacuate their homes, our hearts go out to them and we want to make sure we can get them home as quickly as possible."

In Virden, Man., one normally calm creek spilled its banks after the area received nearly 150 millimetres of rain in a 24-hour period, and officials shut down a highway near the town following a bridge failure. As their basements filled with rain water, several residents living along the creek chose to evacuate their homes.

Others opted to stay and erect sandbags around other homes at risk of flooding. Despite the challenge, spirits remained high as the volunteers worked together to protect their neighbours’ properties.

"Just got to help the community,” Brock Koop told CTV Winnipeg Monday. “You know, it's fun growing up here and you just got to come together and help out in a time like this. That's why I'm here, for sure."

Mayor McConnell said he's come to expect nothing less from the people of Virden.

"We put out the call and this is the amount of people who showed up. It's been tremendous. We're really excited about this."

Meanwhile, residents in Brandon, Man. are bracing for fast-rising water levels as the hundreds of millimetres of rainwater that has fallen over the past few days is making its way into the Assiniboine River.

A state of emergency has already been declared in Brandon. If the Assiniboine crests in the coming days, local officials are hoping they will be prepared. Additional pumps will be placed in key areas along the dike system, and the roads surrounding it are expected to be closed in the coming days.

As the cleanup continues, the one area of bright news is that sunshine is in the forecast for both western Manitoba and southeastern Saskatchewan.

With a report from CTV News' Janet Dirks, CTV Winnipeg's Ben Miljure and files from The Canadian Press 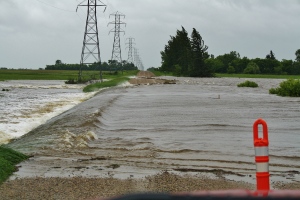 Deluge of rain drenches parts of the Prairies