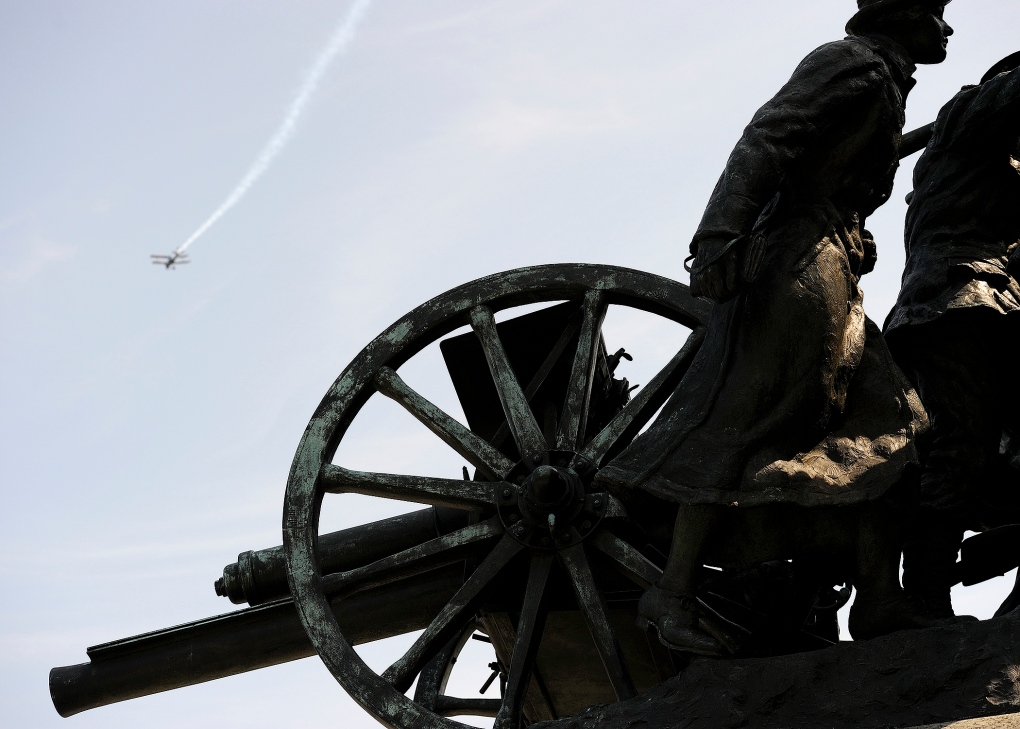 An aircraft flies past during the 100th anniversary of the First World War at the National War Monument in Ottawa on August 4, 2014. (Sgt Dan Shouinard / Combat Camera)

MONTREAL -- Alan McLeod was only a teenager when he won the Victoria Cross, the Commonwealth's highest award for valour, in the bullet-riddled skies over France in the First World War.

The wounded 18-year-old pilot stood on the wing of his burning plane, which had been raked by bullets from enemy fighters, reaching amid the flames in the cockpit to try and steer it earthward. His injured gunner straddled the fuselage, continuing to fire his machine-gun and knocking down three German aircraft.

Thrown clear on impact, McLeod pried his gunner, Lt. Arthur Hammond, loose from the wreckage. He dragged him across No Man's Land, the disputed ground between German and allied trenches, to safety, taking more wounds from artillery and sniper fire.

McLeod's wounds wouldn't kill him, however. The fresh-faced Manitoban would die of Spanish flu five days before the Nov. 11, 1918, armistice that ended the war.

"He did unbelievable things before he turned 19 and he never got to experience life," said Maj. Bill March, a historian with the Royal Canadian Air Force.

March acknowledges that fighter aces get most of the glory but points out the corps pilots such as McLeod contributed a massive amount to the war effort.

Air combat was in its infancy when the First World War began, only 11 years after the Wright Brothers invented the airplane and took it for its first successful flight in 1903.

The infant grew up fast. Beginning with dirty looks and shaken fists between opposing pilots and aircrew, the battles escalated when rocks and other objects were thrown at or dropped on planes by opposing combatants. Soon, they began popping at each other with pistols and rifles and that escalated again as nations figured out how to mount machine-guns on their aircraft.

Much is made of the chivalry of air combat in the First World War but March said Canada's most prolific ace would have described it as "scientific murder."

"The idea was to shoot the enemy down," March said. "Was there some chivalry? Undoubtedly. Was there hit-and-run tactics and ambushing the enemy if we could? Well, there was undoubtedly that too. It's the nature of the beast."

When Canada entered the First World War, the Canadian Aviation Corps consisted of three people and one Burguss-Dunn aircraft that was eventually judged unsuitable for combat.

"These three guys and this aircraft sailed with the first contingent over to England," recalled March. "The aircraft was basically never taken out of its crate, it never flew, and only two of those individuals went on to fly. They joined the Royal Flying Corps."

The Canadian War Museum puts the number of Canadians in the RFC or the Royal Naval Air Service, the air corps of the British navy, at 22,812, with an additional 13,160 serving as aircrew.

The Canadian Forces Directorate of History and Heritage also broke down the composition of the Canadian contingent in the British flying services as 52 per cent being originally born in Canada. Most came from urban centres.

Some experience or a pilot's licence -- which was rare at the time -- was needed to sign up. Training was rudimentary and while by the end of the war pilots would go to squadrons with between 30 to 50 hours in the air, at the start of the war it wasn't usual for them to be deployed after only nine or 10 hours aloft.

"They used to call themselves the 20-Minute Club because the life expectancy of a new pilot in combat in 1916-17 was 20 minutes," March said of the early pilots.

March said that training was ramped up by 1917 and the RFC came to Canada to set up Royal Flying Corps Canada to take advantage of what they saw as a pool of potential aviators here.

"Another reason they really pushed the training system like this is because they were losing pilots hand over fist and so they needed to get more, for lack of a better term, cannon fodder into the air," March added.

The planes themselves were a far cry from the high-tech fighter jets that swoop through the skies today.

"It's wood, wire and canvas," was how March described First World War aircraft. "They basically took off at about 60 miles an hour, they flew at 80 miles an hour and they landed at about the same speed.

"They weren't really all that much faster than your car."

Churning engines were known to spit fuel back at the pilots, often making them sick and aircraft at the beginning of the war didn't get much above 3,000 metres.

Necessity changed that as the war ground on. In the beginning, 60-horsepower engines were common. By the end, many engines could crank out 400 horsepower -- still a long way from the supersonic power of today's CF-18 fighter jet.

"They recognized that to take advantage of all the things they wanted aircraft to do in combat, you had to be able to go higher, faster and further than you did at the beginning of the war," March said of the First World War strategists.

Even the flight suits were mainly designed for warmth during the war because cockpits were open.

Coveralls would go on over uniforms and the aircrew would bundle up further in bad weather.

"Basically they looked like Eskimos flying with goggles," March said.

One piece of equipment that was not immediately embraced was the parachute. Many pilots were leery about trusting their lives to this piece of "new technology" and questioned whether a piece of silk would keep them alive. Many preferred to take their chances and ride their plane down if it was hit.

"Their biggest fear was their aircraft being on fire," March said. "Because any airman now or then will tell you, if your aircraft's on fire you don't really have much of a place to go.

"But they didn't use the 'chutes. They didn't come into common practice until later in the war and even then that was hit-and-miss. It was after the war that they basically became standard equipment."

One area where the air force benefited over the infantry was in living conditions, which were better than in the trenches. In fact, a number of pilots switched to the air corps from ground forces to escape living amid muck and vermin. Although squadrons were kept close to the front, pilots and aircrew were billeted in tents or a nearby farmhouse or village.

"So you were either a guest or you were camping out," said March, who explained an average pilot's day was a mission in the morning, then back for lunch, followed by another mission in the afternoon.

"That would be it for your day. Then you'd go to the mess, have a few drinks and then repeat it all the next day."

While the Second World War is noted for the Battle of Britain air battles and the bombing campaigns carried out by both Allied and Axis forces, March noted that while the Germans extensively bombed London, "there were no big battles because there was constant air activity."

He cited the battle to take Vimy Ridge in 1917 as an example where air reconnaissance and photography of the objective would have been carried out in the months before and then fighters would have been used to beat back German airpower during the actual fighting. Other planes would have also been used to help direct artillery fire.

March said the legacy of the First World War flyers cannot be underestimated. With the horror of the ground war, the exploits of the "knights of the air" were used to boost morale at home.

"They were the rock stars of their day," he said.

And after the war, they used their experiences, pioneering attitudes and desire to push technology to build an aviation industry.

"There is no doubt that a lot of the people who learned to fly brought this back and started businesses, started barnstorming, started doing things that have become part of our heritage now, like bush pilots flying up north. All that was part and parcel of the experience of the First World War."