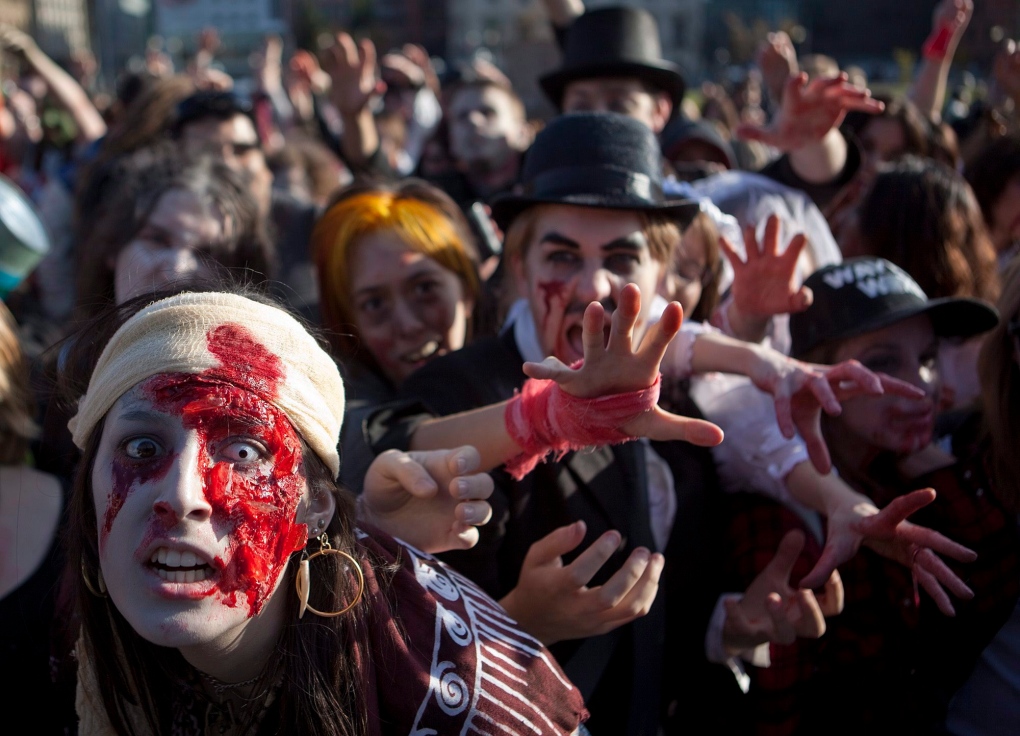 People dressed as zombies moan and shout for brains on Parliament Hill in Ottawa on Saturday, October 23, 2010. (Pawel Dwulit / THE CANADIAN PRESS)

Torontonians may think they live in the centre of the universe, but when the zombie apocalypse hits they may wish they lived somewhere else. According to one blogger’s analysis, St. John’s, N.L. is the best place to be when the undead come to town.

Inspired by a similar study south of the border, Edmonton blogger Michael Ross analyzed the readiness of Canada’s 20 largest cities to survive a zombie invasion.

While the U.S. study looked at states’ overall readiness and included 11 factors, Ross zeroed in on municipalities and analyzed six factors:

With all that data factored in, St. John’s is the Canadian city most likely to survive a zombie apocalypse, with a 0.663 overall score (out of a potential 1.0). Regina was second with a score of 0.660 and Edmonton was third with 0.643.

Rounding out the top 10 were:

The place you don’t want to be when the undead hit town? Windsor, Ont., followed by Toronto and Hamilton, Ont. Actually, the seven worst cities to be in during a zombie apocalypse are in southern Ontario. London, Oshawa, St. Catharines and Kitchener-Waterloo round out the top-seven cities least likely to survive a zombie apocalypse.

In summing up his findings, Ross warns that southern Ontario is “a zombie playground.

“Ontarians don't have a lot of guns, southern Ontario is relatively warm, and there's really nothing special going on in terms of physical activity and obesity.”

One of the best strategies is to live in a provincial capital, he notes.

“They tend to have military bases, and more often than not are large with relatively low density (suburbia is way better for zombie defense than downtown, of course).”