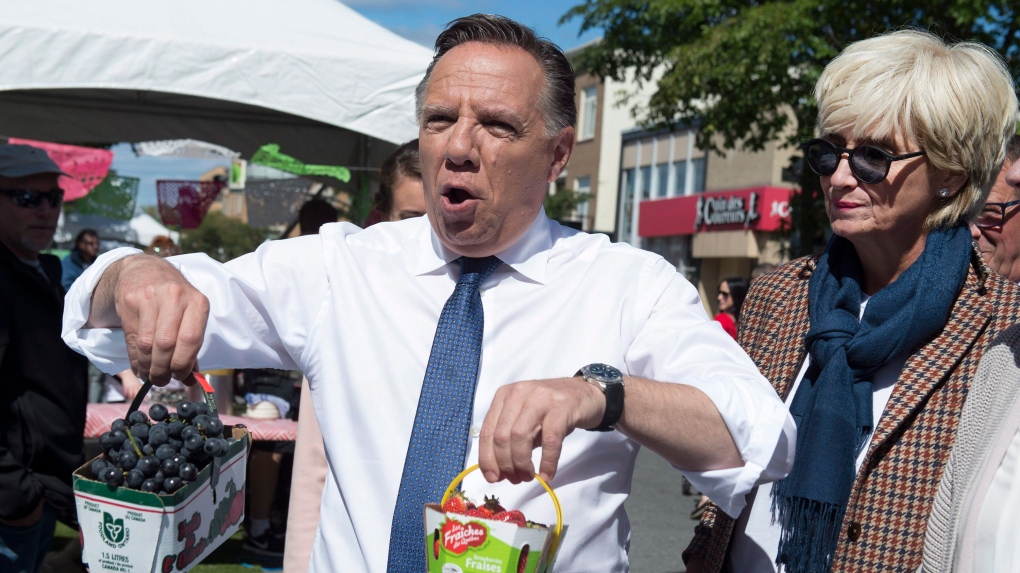 MONTREAL -- Coalition Avenir Quebec Leader Francois Legault became the first of the major party leaders to unveil his party's financial framewok on Saturday, as his rivals chose to focus their energy on language and health care.

Legault, whose party leads the most recent opinion polls, promised his government would reinvest in health and education without raising taxes beyond the rate of inflation.

He told reporters in Quebec City he would increase spending on health care by about 4.1 per cent each year, while education spending would rise by 3.5 per cent.

The plan, which he described as "prudent" and "conservative," would be enough to cover the various promises he's made, including universal kindergarten for four year olds, he said.

To realize his promises without a tax increase, the party is relying on finding increased efficiencies in the public service, IT management, procurement, and by reviewing government programs, including the previous Liberal government's cultural program.

Legault said his plan would result in an additional $500 million spent on health and $400 million on education, all of it at the elementary and high school levels.

He said the spending for other government departments would remain the same.

Legault later outlined his priorities for the Quebec City region, including a third route between the city and its southern suburb of Levis to be completed before 2022.

The Coalition's financial framework was criticized by Liberal Leader Philippe Couillard, who described it as a "rough draft" that lacked information.

"There are two categories in a budget -- revenues, expenses -- in both cases, there are things that have disappeared, that have been under-evaluated in a massive way; very few details about infrastructure," said Couillard, who unveiled his own plan to limit the province's often sky-high hospital parking prices to maximum of $7 a day.

Also on Saturday, Couillard was forced to defend the candidacy of former policeman Guy Ouellette, who was briefly arrested by the province's anti-corruption unit last fall before being released without charges.

When questioned on Ouellette's presence, Couillard reminded reporters that the three-time legislature member wasn't facing any charges, and "the population and his colleagues have confidence in him."

Meantime, Quebec solidaire unveiled details of a promised universal dental insurance plan that it says would cost the province about $950 million per year.

The left-wing party proposes free dental care for children and welfare recipients, while adults would be eligible for 80 per cent coverage for preventative care and 60 per cent for repair work.

When questioned on whether her plan was too expensive, co-spokesperson Manon Masse defended it by saying that one in four Quebecers can't afford dental work, which leads to expensive hospitalizations for abscesses and other tooth problems.

The Parti Quebecois, meanwhile, sought to keep the issue of language at the forefront of Quebec's election campaign with a promise to toughen the province's language laws.

Standing near the gates of one of Montreal's best-known English universities, party leader Jean-Francois Lisee said that he'd eventually require all students who attend English-language junior colleges, of CEGEPs, to complete a semester in a French college in order to graduate.

"It's part of the Quebec experience, and I think it's an enrichment," he said at a Saturday morning news conference outside McGill University.

Lisee did not put a cost to his plan, which he said would be preceded by studies and pilot projects.

The Parti Quebecois leader also reminded voters of his proposal to extend the reach of the province's French language charter, known as Bill 101, and also to table new legislation he's calling Bill 202.

Lisee said the legislation would ensure, among other things, that new immigrants and their spouses must know French as a pre-condition of acceptance.

He also promised to expand Bill 101 to cover more workplaces in order to combat what he called the language's "undeniable" decline.

Lisee's announcement came a day after Legault said his government would force new immigrants to leave the province if they don't learn French within three years.