Filling the gap in data on anti-Asian racism in Canada 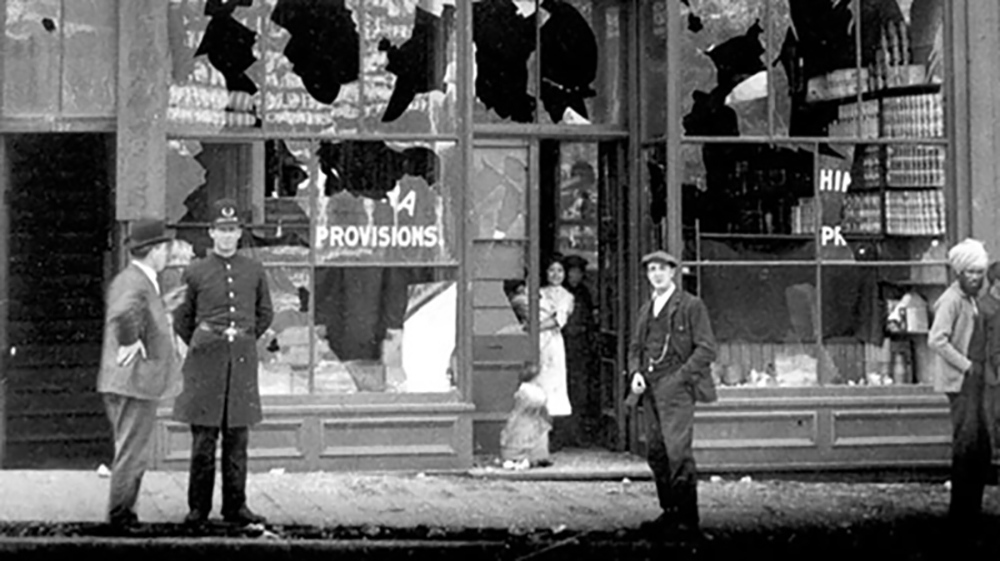 VANCOUVER -- Violent, racist attacks are making headlines across the country. Many of them go viral if they’re caught on video and shared on social media. But what about the racist incidents that don’t trend online? Project 1907, a community-led, grassroots data project is trying to fill that gap by collecting data on racist experiences that Asians in Canada can experience everyday.

Through an online form, Project 1907 has collected over 120 reports of anti-Asian racism between January and mid-May. Their data shows 20 per cent of reported incidents involved assault like targeted coughing, spitting or physical violence, and 80 per cent of racist incidents were verbal harassment like name-calling, racial slurs, or threats. Over 70 per cent of respondents identified as women. Most of the reported incidents happened in public places such as sidewalks, grocery stores and transit. The survey is open to anyone across Canada, to share their experiences. 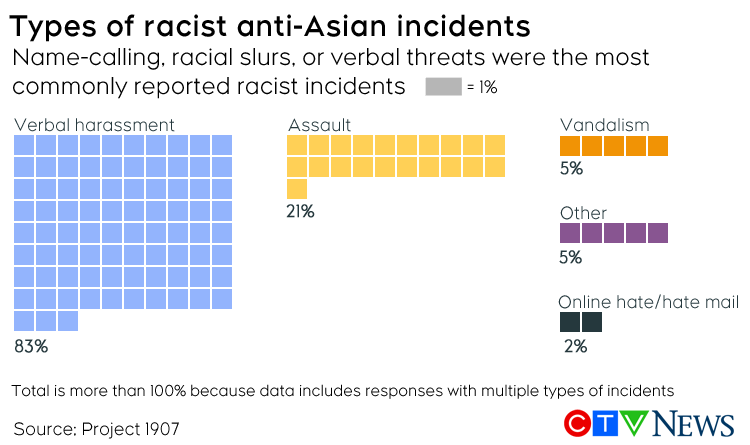 “What we are seeing in the news right now are some of the most violent cases,” Project 1907 co-founder Doris said in a phone interview. “This racism reporting form that we’ve created is telling us that there’s a lot more insidious forms of racism that people are experiencing on a daily basis.”

Led by Asian women, Project 1907 started circulating an online survey to their community in B.C., and also got some reports from Quebec, Ontario and Alberta. While participants of this survey are anonymous, the data is giving a voice to those who've experienced racism that might not be captured on camera or in police data and hate crime statistics. We’re not sharing the co-founders’ full names because they’ve also been the target of racist incidents in the past.

That means victims are forced to step up, again and again, just to prove that racist incidents are happening, he says. Yu was teaching at UCLA in 1994 in the aftermath of Rodney King’s violent beating by four white LAPD officers -- who were eventually acquitted. King’s 1991 arrest was 26 years ago. Yu says he’s frustrated that every time there’s a spectacular incident of racism, “it's a surprise; or the question is, ‘is this just isolated? Or is this widespread?’ Why we keep asking that and have that additional surprise, is because we don't actually track patterns.”

The data collected by Project 1907 aims to contextualize the most violent incidents and show that acts of racism are not isolated events but rather part of a structural problem in society. 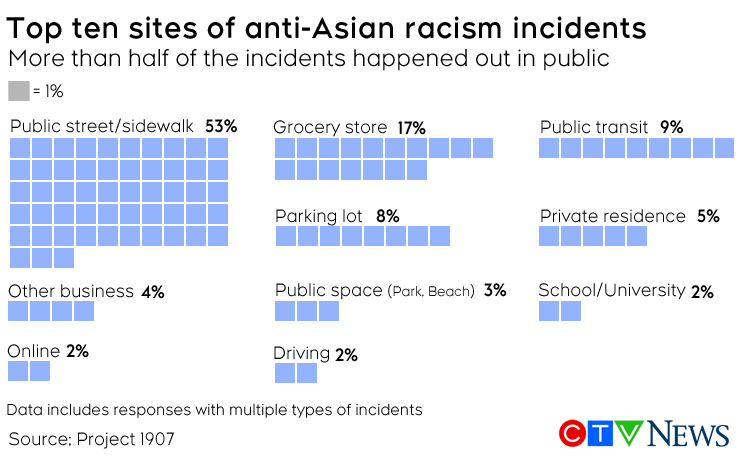 Public spaces have a long history of segregation and racism and Project 1907’s name aims to reclaim a part of that history. In 1907, the Asiatic Exclusion League was formed, with the goal to exclude Asian immigration and create a “white Canada.” That same year, violent anti-Asian riots led by white-supremacists vandalized businesses in Vancouver’s Chinatown and Japantown. 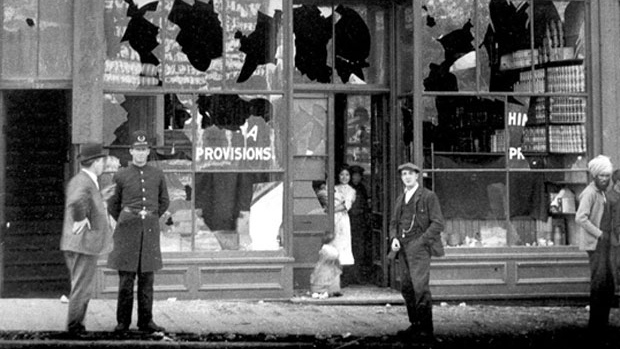 Anti-immigration riots exploded into Vancouver’s Chinatown and Japantown in 1907. (Library and Archives Canada)

As B.C. and the rest of Canada start to cautiously re-open businesses in the wake of COVID-19, some organizations are thinking about how to address racism in their spaces. The city of Vancouver directly addressed a rise in anti-Asian racism. They list reporting incidents to police as a main strategy, along with links to legal advocacy, raising awareness of challenges based on race, and Multicultural Victim Services support.

Translink published a safe operating plan, but it doesn’t address racism. In an email, Translink spokesperson Dan Mountain said harassment and verbal or physical assault “are not tolerated” and passengers are encouraged to report any racist incidents to transit police. He also noted that bus operators and SkyTrain Station Attendants receive diversity training that include training on, “the value of diversity and inclusion with reference to the Human Rights Code.”

But the data Project 1907 is gathering measures incidents that might not meet the criminal threshold in data collected by police. “Verbal abuse, being called a racial slur is not a crime,” says Doris. “It is an incident and it has an impact on individuals and community, especially when it's being used over and over again.” Going to the police is also not always an option. Racialized communities have a long history of being targeted and over-represented in the criminal justice system and might not feel safe reporting to police, Doris said.

‘BETTER POLICING’ NOT THE ANSWER

“The solution doesn't lie in better policing,” Doris said, “it lies in us as a community to address the issues.”

Project 1907 is continuing to collect data and now also inviting witnesses to report any racist incidents. They’ve also developed calls to action that include taking bystander intervention training and a list of recommended podcasts and books that prioritize diverse voices. 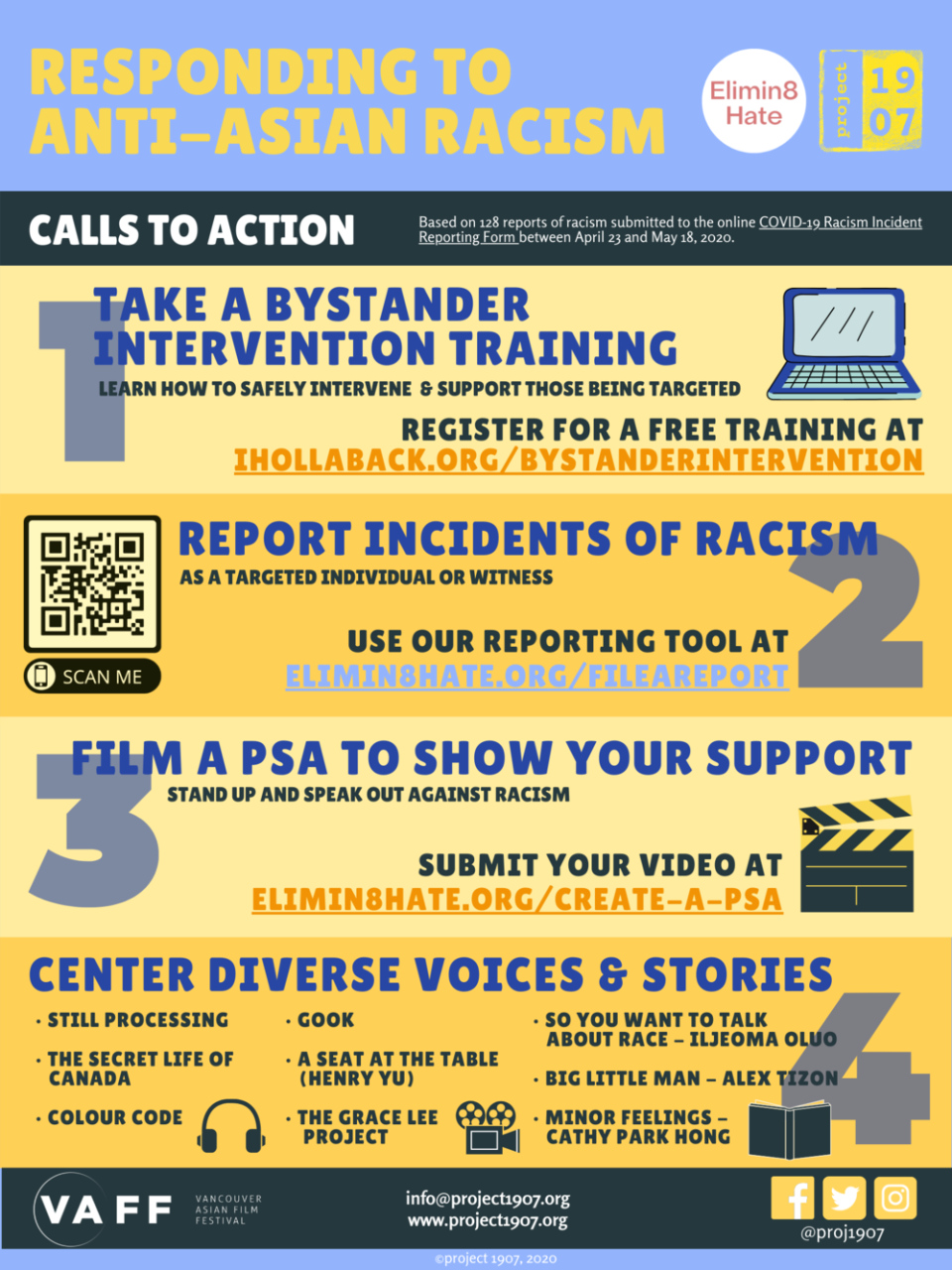 While this project focuses on anti-Asian racism, Project 1907 organizers hope it will highlight systemic problems in society and push the entire racial justice movement forward.

Yu believes community-led data projects are giving society a place to start from, but it shouldn't be just community leading the way. All leaders need to act, he says, and invite those with experience to guide policy and develop both urgent short-term solutions as well as medium- and long-term plans to address racism in society.