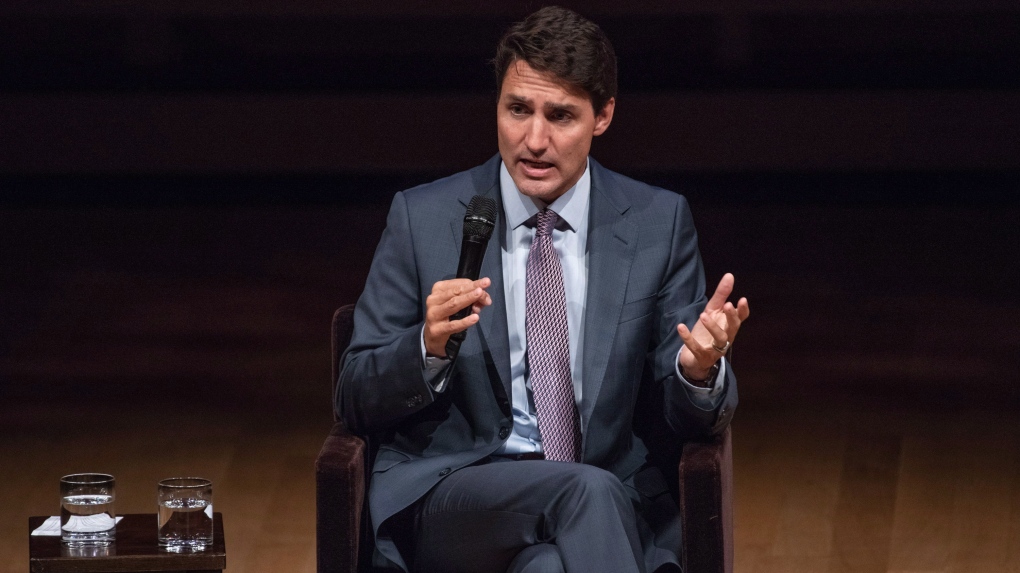 Prime Minister Justin Trudeau participates in an armchair discussion with Christine Lagarde, managing director of the International Monetary Fund, moderated by journalist Katie Couric, at the Women in the World Summit in Toronto on Monday, September 10, 2018. (THE CANADIAN PRESS/Galit Rodan)

TORONTO -- Prime Minister Justin Trudeau says movements such as Me Too play a role in changing a workplace culture that often keeps women from top-level positions.

Speaking at a women's summit in Toronto, the prime minister said sexual harassment is one of the barriers that can prevent women from rising through the ranks in business and in politics.

Asked what the country could do to increase the number of women in senior corporate jobs, Trudeau invoked his own experience in recruiting women to politics so that he could appoint a gender-balanced cabinet, saying it took years of outreach to build his team.

"Now the challenge is around retention, because politics is still a very difficult game...there's still huge barriers and old boys' approach in many ways that cause many challenges," he said.

"Therefore how we're changing the culture within the political world we're in -- including things like Me Too and sexual harassment -- becomes really, really important around making sure that women make it from that entry level to the top level positions, and more of them."

Trudeau, a self-professed feminist who has publicly condemned inappropriate behaviour, himself has faced allegations of misconduct dating back to 2000, when he is accused of groping a female journalist.

The prime minister has insisted he did not "act inappropriately" towards the woman, whose story surfaced in an editorial from the Creston Valley Advance newspaper, but has acknowledged she may have a different perspective on the incident.

Critics have denounced Trudeau's response, accusing him of essentially dismissing the woman's account, and called on him to order an independent investigation, as he did when allegations of misconduct and harassment were made against then-cabinet minister Kent Hehr.

Trudeau and some members of his cabinet took part in the Women in the World Canada summit, a one-day event bringing together politicians, artists, journalists and other high-profile individuals.

The prime minister, who appeared at the summit for a second year in a row, joined the manager of the International Monetary Fund, Christine Lagarde, in a conversation with broadcaster Katie Couric on how the global economy could benefit from tapping into the talents of women.

During the panel, he touted the pay equity and transparency legislations planned by his government, saying such measures are key to ensuring women can participate fully in the workforce.

"We're moving forward with the kind of things that will eventually move the markers in a significant way," he said.

"Over the past 40 years, in my lifetime, women entering the workforce has added a third to Canada's GDP. We're looking for where the next growth is coming from, that's an obvious place, where proper empowerment of women entrepreneurs, of women in the workforce, is essential to create the kind of growth and benefits that we need in our society."

Lagarde said it's important to anticipate future barriers women may face, noting that women will be disproportionately affected by the rise in automation.

Trudeau said that while his government has made investments in artificial intelligence, it is equally important to prepare Canadians for that transition.

That includes getting more women into science, technology, engineering and math fields and into trades, and putting pressure on universities to increase gender parity in research chairs, he said.

Foreign Affairs Minister Chrystia Freeland, meanwhile, participated in a panel titled "taking on the tyrant" about the global rise of populism and "authoritarian strong men leaders."

Maryam Monsef, the minister of the status of women, took part in a talk on tackling the stereotypes that hold women back in the private and public sectors.

On its website, the summit says it showcases "women of impact," but also, increasingly, men who champion women and the issues affecting women. Its founder, Tina Brown, said Trudeau is making the advancement of women a priority in his government, his budget and his policies.